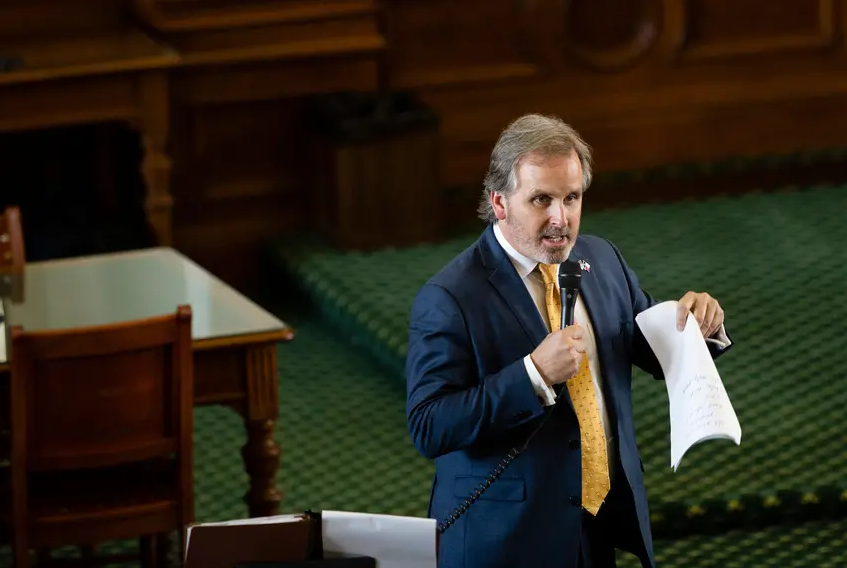 The Texas GOP lawmaker behind the abortion ban, voting restrictions bill and more

When Gov. Greg Abbott signed one of the most consequential bills of the year last month — the elections overhaul that caused House Democrats to flee the state for nearly six weeks — he chose the East Texas city of Tyler.

Abbott said the location was only appropriate because the “lead advocate from the very beginning has been” Bryan Hughes, the local state senator.

“In his district is the right place to sign SB 1 into law in Texas,” Abbott said, seated alongside the lawmaker.

While that might not have been the sole reason for the location — it is also safely Republican territory for a politically divisive bill — Abbott’s comments underscored how central Hughes has been to GOP priorities this year in the Legislature.

Six months earlier, Abbott appeared with Hughes at the same location in Tyler — the Plaza Tower Atrium — to promote a bill he was carrying to stop social media companies from banning users based on their political views, partly inspired by former President Donald Trump being blocked by Twitter.

Hughes would go on to carry the elections and social media bills through the regular session and then two special sessions. He also was the author of the law that went into effect last month banning most abortions in Texas, and after a colleague got into a car accident this spring, he took on legislation cracking down on what Republicans called critical race theory in public schools.

All four bills were priorities of Abbott, Lt. Gov. Dan Patrick or both.

“Sen. Hughes had quite a session, by the way,” Patrick said at the Tyler news conference, getting applause from the friendly audience as he rattled off the four proposals, calling them “four cornerstones of conservative policy that will help make Texas stronger.”

“I just think it’s that work ethic, that preparedness and the dependability he brings,” said state Rep. Cole Hefner of Mt. Pleasant, Hughes’ successor in the House. “He’s proven himself to be a solid go-to person.”

To Democrats, Hughes has become one of the leading faces of Texas Republicans’ rightward lurch this year in Austin — and some acknowledge that unlike some of his fellow partisans, he has done it with a disarming congeniality. His workload this year has made him known to a wider audience than ever for his aw-shucks demeanor, navigating the tensest debates with a seemingly unshakable politeness.

Not that these traits are always seen as positives.

In naming Hughes one of the worst legislators in July, Texas Monthly quoted Hamlet: “One may smile, and smile, and be a villain.”

“It’s always easier to take on somebody and challenge somebody that’s an a-hole, right?” said Sen. Carol Alvarado of Houston, chair of the Senate Democratic Caucus.

Alvarado said she has a good working relationship with Hughes and they are “very cordial” with one another, but like many Democrats, she disagrees strongly with much of the policy he has championed this year. That was on full display last month when she launched a 15-hour filibuster of the elections bill — starting with an acknowledgment of the well-liked author.

“Sen. Hughes, you’re always so kind in debate, and I’m gonna do you a favor,” Alvarado said. “I’m gonna give you a break. I’m gonna talk for a while so you can maybe go enjoy dinner.”

Calling Hughes a “gentleman,” Alvarado said he came up to her after the filibuster and shook her hand. Despite her efforts, the bill still sailed through the Senate.

The legislation he championed — especially the near-total abortion ban and the law restricting voting options — have garnered national attention while also being criticized for rolling back the rights of women and people of color.

Republicans pitched the elections bill as a way to prevent voter fraud, though they were unable to present significant evidence of it. Democrats and voting rights advocates call it voter suppression targeting people of color, who local officials said disproportionately used those election methods it prohibits.

The abortion bill has already spurred a dramatic decrease in the number of procedures being performed in Texas. Legal challenges have so far failed to block it from being enacted and some clinics have stopped offering abortions that are still allowed under the law.

Dyana Limon-Mercado, the executive director of Planned Parenthood Texas Votes, said she believes Hughes’ demeanor plays differently with everyday Texans who are grappling with deeply personal decisions like whether to have an abortion.

“I think for people outside of the Capitol, I think he is received very differently when you are on the other end of those attacks he is launching,” she said. “Maybe it sounds nice while he’s saying it, but in reality what he’s doing is dehumanizing Texans and forcing Texans to suffer unnecessarily.”

Hughes’ rise through the legislative ranks

Hughes has served in the Legislature since 2003. He started out in the House, where he earned his seat after defeating a longtime Democratic member, Bob Glaze.

After state Sen. Kevin Eltife, R-Tyler, announced his retirement in 2015, Hughes launched a campaign for the open seat in the upper chamber. Hughes got the support of big GOP names including Patrick but narrowly failed to win the primary outright, advancing to a runoff against libertarian-leaning state Rep. David Simpson of Longview. Hughes crushed Simpson in the runoff, winning by nearly 40 percentage points.

Hughes had always been an ally of the lieutenant governor, but got his biggest promotion up the leadership ladder after the 2019 session, when Patrick named Hughes chair of the powerful Senate State Affairs Committee. The panel has a far-reaching purview, and it was from that perch that Hughes was able to take on at least three of Patrick’s initial 31 priorities for the 2021 regular session: the bills on abortion, elections and social media.

Hughes and other Republicans refer to the abortion legislation — which bans the procedure as early as six weeks into a pregnancy — as the “heartbeat bill.” But medical and reproductive health experts say that’s medically inaccurate since an embryo does not have a developed heart at six weeks’ gestation.

Hughes and other lawmakers took a novel approach in writing the abortion bill, which has so far helped the new law skirt Roe v. Wade and other U.S. Supreme Court rulings. Its enforcement rests not with the government, but on lawsuits from private citizens suing people who perform or aid with the procedure once fetal cardiac activity is detected.

Senate Bill 8 was particularly meaningful to Hughes because the “pro-life movement has really, really motivated my political involvement from the beginning.” But none of the issues in the major legislation he championed were new to him.

“Senator Hughes has supported all of these issues in past sessions and knew the issues well,” Patrick said in a statement.

Hughes was less familiar with the proposal to crack down on what Republicans call critical race theory, which state Sen. Brandon Creighton of Conroe was carrying until he was sidelined by a car accident in April. But Hughes said he nonetheless found the cause “really important, and I had to get comfortable with the subject matter on short notice.”

Arguably no bill defined Hughes’ year like the elections bill did, though.

The proposal caused disorder in the House, where even before Democrats broke quorum in July, leadership had swapped authors and committees for the legislation. But in the Senate, there was never any doubt Hughes would continue carrying the bill.

That is not to say it was a smooth process, especially in the final hours of the regular session, when Hughes scrambled to try to get the legislation across the finish line during an overnight meeting.

Hughes ended up defending a late change to the bill that proved to be among its most controversial provisions at the time: starting the Sunday early voting window at 1 p.m., hampering efforts by Black churches to vote after morning services that are known as “Souls to the Polls.” That addition was made in conference committee, where members of both chambers were appointed to hash out their differences in the bill. While Republican negotiators later called the 1 p.m. start time a mistake and moved it up to 11 a.m., Hughes stood by it in those final hours of the regular session, saying “election workers want to go to church, too.”

“Conference committees are toward the end [of the session] and the clock is ticking, and when the conference committee report comes back, it’s take it or leave it for all of us … and so you have to weigh everything,” Hughes said. “And so yes, that was stressful.”

Hughes’ role in shepherding the abortion and elections bills will only receive more scrutiny in the coming months as they face a barrage of litigation. One lawsuit against the voting bill mentions Hughes 10 times, including references to how he scrambled to try to get it passed late in the regular session and admitted he did not consult “minority advocacy or civil rights organizations” on the proposal.

What’s next for Hughes?

At times, Hughes leaned into the bigger spotlight that the elections bill provided him.

He headlined two Austin rallies for the Republican National Committee, including one to counter Beto O’Rourke’s rally against the elections legislation in late July outside the Capitol. He wrote a Wall Street Journal op-ed last week defending the new abortion law.

On Tuesday, Hughes is hosting a barbecue dinner in Tyler with the conservative group Americans for Prosperity to discuss his achievements in the current Legislature.

Hefner said there is “no question” that Hughes’ profile has ballooned back home this year thanks to a flood of national — and even international — media attention. And Hughes is not the only East Texas Republican who has had a major role in conservative wins this year, with Tyler Rep. Matt Schaefer authoring the state’s new law that allows permitless carry of handguns.

“People are seeing it, and they’re pretty pumped, pretty energized, about what we accomplished,” Hefner said.

Even Democrats give Hughes some credit for his political skills.

All the attention has begged the question: Could Hughes be angling for higher office? He says he is not interested.

“I really like the Senate, and I don’t have any plans to do anything else,” said Hughes, who — like every other senator — is up for reelection next year due to redistricting. “Obviously, the voters may decide not to send me back, but I think the Texas Senate is where I need to be right now.”

While Hughes serves on the Senate Redistricting Committee, he said he does not anticipate carrying any of the marquee bills for the third special session that starts Monday.

This article was originally posted on The Texas GOP lawmaker behind the abortion ban, voting restrictions bill and more