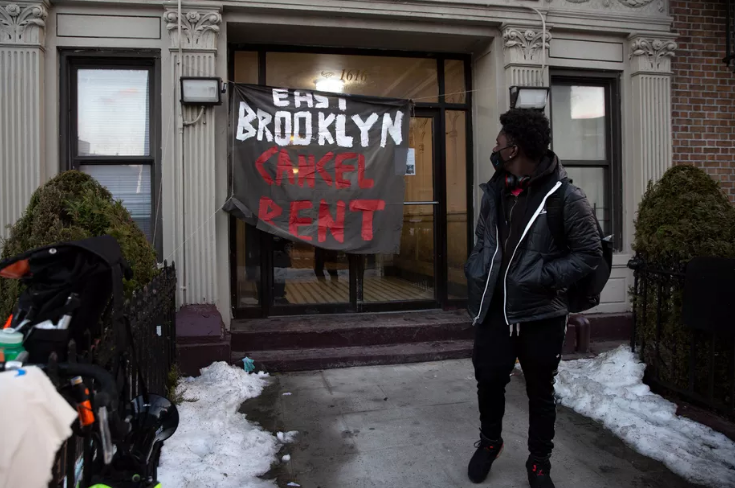 The Eviction Moratorium Pause Ends Feb. 26. Here’s What You Need to Do

When the state Legislature passed the Emergency Eviction Act at the end of last year, nearly all eviction proceedings were paused for 60 days. That pause ends on Friday, Feb. 26.

After Feb. 26, pending eviction cases can start moving forward again in court — and new cases can be filed — unless a tenant submits a hardship declaration form to either the court or the landlord.

That means any tenants facing eviction who haven’t filled out this hardship declaration could start hearing from the courts — and landlords can start new cases against tenants behind on rent who haven’t filed a declaration.

Here’s what tenants need to know as Friday’s deadline approaches:

Hold up — I thought the eviction moratorium was until May 1?

The moratorium is extended until May 1 only for tenants who fill out the hardship declaration form.

From the end of December until now, almost all tenants were protected from eviction because cases were paused. But after Feb. 26, the moratorium protections only cover tenants who submit the hardship declaration.

Justin La Mort, a tenant attorney at Mobilization for Justice, said: “The true moratorium ends the 26th. Then it’s only those who have done the declaration who are protected… You’re not protected until you take action.”

Important: You can fill out the form at any point before May 1 — up until when the marshal shows up at your door — to pause your eviction case.

Do I have to have an eviction filed against me already to fill out this form?

Anyone who can say that they’ve experienced some type of financial hardship because of the pandemic or that needing to move would pose a health risk can fill out the form. The moratorium covers a wide variety of situations people are facing.

When the moratorium was passed, housing advocates noted that a person can fill out the hardship form before a case is filed to prevent having to appear in court at all until at least May.

How many people have filled out this form already?

According to the Office of Court Administration, 6,817 people in New York State have filed hardship declarations with the courts. From that, more than 5,000 were for pending eviction cases, and about 1,000 were to prevent cases that haven’t been filed yet.

Housing advocates worry that not enough tenants know about the form or how to submit it. They are concerned that the number of forms submitted is much lower than the number of New Yorkers who have struggled to pay rent and need protection from eviction during the pandemic.

La Mort said: “Any time where you create a system where tenants have to jump through hoops you’re gonna lose people.”

Kim Statuto, a tenant leader with Community Action for Safe Apartments in The Bronx, said: “That’s a very small number compared to what we’re going through and what people are going through.… People need to know that this is an option for them, and it may help a family rest a little easier.”

How do I fill out the hardship declaration form?

To make the process easier, three housing organizations — the Right to Counsel Coalition, JustFix.nyc and Housing Justice for All — worked together to make a tool called Eviction Free NY where tenants can fill out and submit the declaration online.

It’s available in English and Spanish, and you can use the dropdown menu to find the form in more languages through an online form Housing Justice for All made.

Malika Conner, director of organizing for the Right to Counsel Coalition, said: “We thought it would be even more important to have an easy, accessible, legally sound way to submit your forms.”

Sam Rabiyah, data lead and engineer at JustFix.nyc, said: “We wanted to make it a lot less daunting to go through the process of sending this form.”

You can also find links to the hardship declaration form in 20 languages directly from the courts here.

What is this tool and what does it do?

The online tool allows you to fill out the hardship declaration form, sign it and send it to your landlord and the courts via email and in the U.S. mail — all from your computer or smartphone.

The tool can look up the address and contact information for almost any New York City landlord using records from the city Department of Housing Preservation and Development, and it will send the info, via certified mail, for you as well — for free.

“We’re taking away the process of needing to print and mail it,” Rabiyah said.

The online tool creates a record of the hardship declaration that tenants can keep. You can download a PDF of the submitted form for your records, and you’ll get a tracking number from the U.S. Postal Service texted and emailed to you showing the form was sent.

Rabiyah said: “We can’t always rely on our government or judicial system to create tools that are accessible or user friendly, and we wanted to make a product that works really well, that’s a breeze for people to use.”

So when do I need to fill out the form by?

If you submit a hardship declaration form by Feb. 26, you can prevent having to appear in court until the moratorium expires in May. But you can still submit the form after Feb. 26 any time until May 1.

If you want a lawyer’s advice, you can call 311 and ask for the tenant helpline, or you can call a provider from this list.

Statuto said: “It’s important for people to know that that’s an avenue and tool that they can use, and then we have to figure out what comes next with all these rent arrears.”

Meanwhile, you may have heard there are some major local elections coming up…

The future of New York’s city government is up for grabs in the June 22 primary elections. Our next mayor and other elected officials are bound to have a huge impact on housing.

THE CITY’s Rachel Holliday Smith will ask some of the mayoral candidates about their plans for housing and their priorities when it comes to tenants in a forum on Saturday, Feb. 27 at 10:30 a.m. The forum will be hosted by The Met Council on Housing, TenantPac and Tenants and Neighbors.

This article was originally posted on The Eviction Moratorium Pause Ends Feb. 26. Here’s What You Need to Do