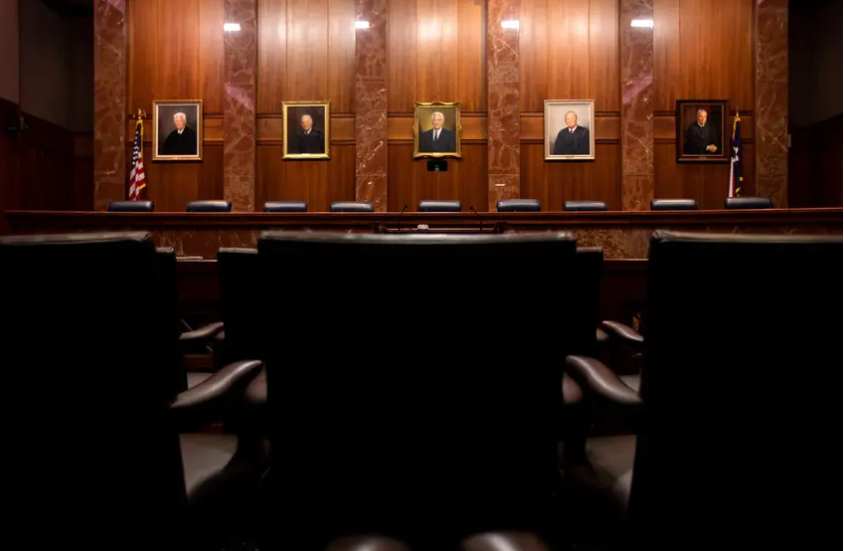 Texas courts cleared for in-person trials, and local officials will decide whether to require face masks

Days after Gov. Greg Abbott announced he will lift many coronavirus restrictions next week, including a statewide face mask mandate, the Texas Supreme Court has largely opened up the courts as well.

Texas courthouses no longer need a state safety review before conducting in-person hearings, including jury trials. And requirements that people wear masks and socially distance will be left up to local officials, according to the all-Republican court’s revised emergency order issued Friday.

In the year of the pandemic, much of the state court system has been put on pause, creating a backlog of cases that will likely take years to overcome. In 2019, there was an average of 186 civil and criminal jury trials per week, according to the Texas Office of Court Administration. From March 2020 through this January, there were 222 jury trials total.

The growing backlog prompted some in the criminal justice system to call for bringing the court system back up to speed. But Grant Scheiner, president of the Texas Criminal Defense Lawyers Association, asked judges to remain vigilant in hopes of preventing another surge of coronavirus infections.

“We hope this isn’t a case of moving too fast, too soon,” he said.

Before Friday, judges were required to hold hearings remotely as much as possible, through phone or videoconference. Last month, Texas marked its millionth virtual court hearing with a guilty plea in a criminal case out of Johnson County, the state’s court administration office reported. By December, more than a dozen virtual jury trials were held in civil cases or low-level criminal cases that at most would result in a fine, not jail time.

But for jailable criminal cases, where a person’s liberty is on the line, virtual trials were essentially off the table. District or county courts could hold in-person jury trials, but they’d first have to submit safety plans for approval from the state’s court administration office and public health authorities. In the meantime, local officials pushed to bond more inmates out of jail before trial, jails became overcrowded and the state prison population shrank.

Starting Friday, courts will no longer need state approval or be required to conduct remote hearings, though the high court’s order still encourages them. Instead, any court can hold in-person hearings if local judicial officials agree on safety measures. Those can, but don’t have to, require face masks or physical distancing in courthouses.

In jury trials, courts will have to inform potential jurors who are summoned to the courthouse of the safety precautions, and excuse or reschedule those who confirm they are infected with, have been exposed to, or are particularly vulnerable to the coronavirus.

Local judicial officials will also need to create communication protocols to ensure no one coming to court has the virus. In August, a Brazos County man was sent to trial even though the jail knew he was infected. Jurors, attorneys and court staff found only out the next day, pausing the trial and sending many into quarantine.

This article was originally posted on Texas courts cleared for in-person trials, and local officials will decide whether to require face masks