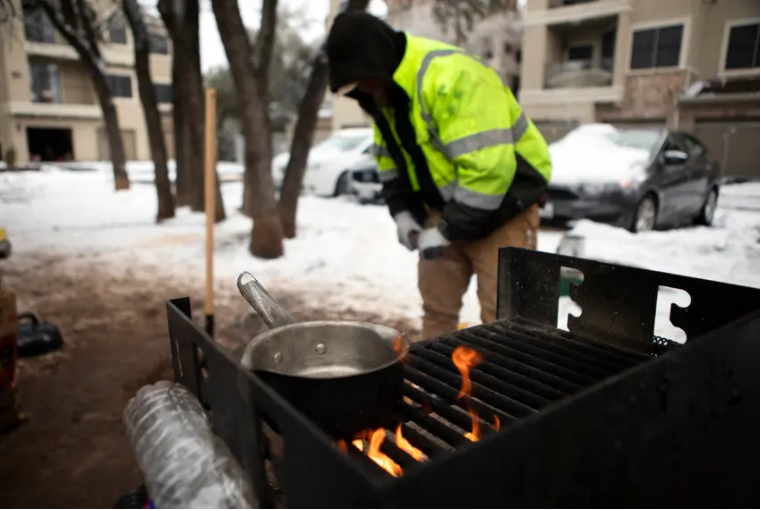 On Friday, as the ice melted and lights flickered back on in homes and businesses across the state, Texans were melting snow into their toilet tanks and mopping up water from busted pipes.

The state’s power outage disaster had firmly transitioned into a water crisis.

The state’s power grid operators declared the worst is behind us, as most Texans have their power restored and the Electric Reliability Council of Texas is no longer calling for forced outages. They said residents can resume normal consumption of electricity.

But about half of the states’ population is still battling water infrastructure problems because of the cold weather — made worse as temperatures ticked up above freezing leading to pipes and water lines bursting.

For Texans who do have water, millions are being told to boil it before consuming in cities across the state including Houston, San Antonio, Austin, Fort Worth, Arlington, Galveston and Corpus Christi.

The state is accelerating efforts to restore water to Texans, Gov. Greg Abbott said at a Friday press conference. The state will connect overloaded local facilities with other labs to expedite clean-water testing efforts and grow the number of plumbers available to fix broken pipes, he said.

More than 1,180 public water systems in 160 counties reported disruptions from the winter storms, affecting 14.6 million people as of Friday morning, according to a spokesperson for the Texas Commission on Environmental Quality.

Reduced water pressure — due to pump failures and increased demand from burst pipes and millions of people dripping their faucets for days on end — is the root of the problem for many of these infrastructure problems. Reduced water pressure can lead to harmful bacteria growing in the water. Other times, power outages have prevented treatment centers from properly treating water.

“When the pressure drops significantly you can’t maintain water quality standards,” Texas Water Foundation CEO Sarah Rountree Schlessinger said. “You got to have that energy come back online … then, allow for sufficient time for pressurization, and then for water quality testing to occur.”

TCEQ requires that any time the pressure drops to a certain level happens for a boil water notice to be sent and that the state be notified within 24 hours. Water pressure needs to return to the required level and then be tested again before the boil advisory can be lifted.

City officials projected water issues to extend through the weekend and potentially next week.

Arlington, with its population of 400,000, says the boil notice could end as early as Saturday. Austin officials say it should be lifted by next week.

“Don’t try to catch up on all of your laundry or do all of your dishes, multiple showers. We really want to build our system up slowly. It’s still very tender and fragile from this event,” Austin Water director Greg Meszaros said.

Several other cities say once water pressure is restored, testing could be completed in 24 hours.

As the ice melts, many are discovering burst pipes and other plumbing issues — causing them to not have running water at all.

Houston resident Morénike Giwa Onaiwu has endured days without water or power in a household of two adults and five children.

Every person in the house sat bundled, wondering when the utilities would return. Food spoiled in the fridge and began to smell, she said.

Before flushing the toilet, she said the family made sure everyone went first. There wasn’t any water to waste.

“It’s just horrible. So you’re freezing, you’re uncomfortable, you’re cut off from the world, you can’t really drive for help and nothing’s open and the roads are icy and slippery,” she said. “You don’t know how far you can even make it. So if you try to go somewhere.”

She is avoiding leaving her house to go to a warming station due to COVID-19 exposure concerns and the icy conditions of the roads.

ERCOT ended its forced outages Friday morning but said local providers were working to turn on the remaining ones shut down by the order.

Other houses have lost power due to storm damage. There were still over 153,000 outages in the state Friday evening, according to PowerOutages.US, a website that aggregates live power outage data from utility companies.

ERCOT will conduct an internal review in addition to being probed from Texas lawmakers on how to better prepare for future incidents, CEO Bill Magness said during a virtual press conference Friday.

“Texas can’t afford for this to happen again,” he said​.