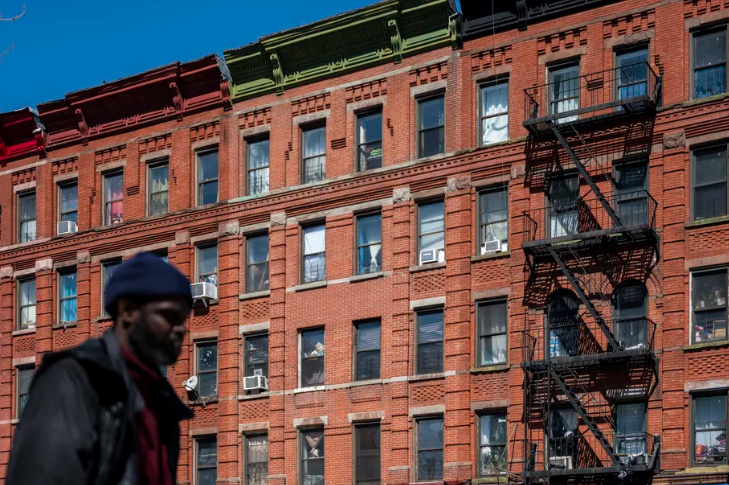 Tenants and Landlords’ Future Hang in Balance Over State Budget. Here’s What That Means

After a year of Band-Aids, lawmakers in Albany finally have the big bucks to pass a substantial relief program as part of the state budget. Here’s what you need to know about what’s on the table for renters, landlords and homeowners.

Now, substantial relief may be in sight. But like everything else with housing during the pandemic, it’s not so simple.

New York has $2.3 billion from the federal government — as well as potentially more cash from the state government — to provide significant aid to tenants and landlords. And it’s up to lawmakers and the governor to decide what to do with it.

A new rent relief effort and other housing assistance (like mortgage relief and aid for New Yorkers experiencing homelessness) are now wrapped up in the state’s last-minute budget debate.

The clock is ticking on the state budget, and lawmakers could vote any time now on a new rent relief program. So let’s get into it.

Here’s what you need to know about what’s on the table for renters, landlords and homeowners.

Tenant and landlord advocates agree, the need for aid is urgent

Joanna Wong, an active member of the landlord group Small Property Owners of New York said: “The number one issue is to get this rent relief out and out as soon as possible to as many people as possible.”

Lawmakers recommended adopting an emergency rent assistance program that has been amended over the past few weeks. Now it’s up to Gov. Andrew Cuomo, Assembly Speaker Carl Heastie and Senate Majority Leader Andrea Stewart-Cousins to hash out the final program in the last stages of the budget process.

Cea Weaver, an organizer for Housing Justice for All said: “How those things play out will make a huge difference.”

So what do we know?

A ton of people are behind on rent — somewhere between 800,000 and 1.2 million households throughout the state. New Yorkers owe more than $2.2 billion in back rent, according to estimates from a study by the consulting group Stout and estimated figures from several lawmakers.

As tenants struggle to pay rent, landlords in the city are falling behind on property taxes, owing more than $600 million, according to an analysis by Comptroller Scott Stringer.

Similarly, more than 50,000 homeowners throughout the state are behind on their mortgage payments, said Jessica Wells-Hasan, vice president of development for the Center for New York City Neighborhoods. More than half of those homeowners are people of color.

Measures have been put in place to prevent evictions and foreclosures. But besides the widely criticized limited rent relief program from last year, tenants and property owners have gone without financial assistance specifically for housing as many people lost income in the pandemic.

Lawmakers and both tenant and landlord advocates agree that New York’s past attempt at a rent relief program largely failed because of overly stringent qualification requirements.

The state distributed less than half of the allocated $100 million to tenants in need, even after slightly expanding the eligibility pool, according to state Assemblymembers Zohran Mamdani and Linda Rosenthal.

A spokesperson from the state Department of Housing and Community Renewal, which administered the program, said the latest numbers have not yet been finalized.

Freeman Klopott, a spokesperson for the state’s Division of Budget, did not confirm what was happening with that unspent money but said: “We are working with the legislature right now to expand the program.”

3. The basic structure of the new program

The new rent relief program under debate would pay rent debt in full for the past year for qualified tenants and an additional three months, if needed. So, 15 months in total.

Tenants or landlords with a tenant’s consent can apply, and the funds would go directly to landlords.

The federal government offered guidelines for how states can spend the money. Households would need to meet all of these requirements:

But, the state could add requirements and potentially use state money to extend aid to renters who make more than 80% of the area median income.

So, what don’t we know yet?

1. How much money is actually in play

In addition to the $2.3 billion in federal money that is coming from the stimulus packages passed at the end of last year and earlier this month, lawmakers and the governor are still determining how much additional funding from the state will go towards rent relief and other housing aid.

The state Senate and Assembly each recommended at least $200 million more be added to rent relief and that hundreds of millions of additional state dollars be used for other housing assistance. But lawmakers we talked to said Cuomo may be pushing back on that.

In theory, the amount of money in play is enough to make up all the rent debt owed from throughout the pandemic if it can get to everyone who qualifies.

But nothing is guaranteed beyond the $2.3 billion.

Esteban Girón, an organizer with Crown Heights Tenant Union, said: “That is an insane amount of money and a generous, generous portion for tenants who really need it … we’ve done a lot of work for this to be the case.”

2. What the eligibility requirements are and what documentation will be needed to apply

Some lawmakers and advocates want eligibility and the application process to be simpler to avoid prohibitive requirements like the last rent relief program. But those terms are still being negotiated.

Weaver, of Housing Justice for All, emphasized it’s important for tenants to have the ability to self-attest their hardship — meaning they can vouch for themselves and not need official documentation or a letter from an employer if they can’t get that.

The ability for tenants to self-attest is allowed under the federal guidelines, but not guaranteed.

Undocumented tenants are explicitly included in the program proposed by the state legislature. But tenant advocates warn that if the program doesn’t create an option to self-attest hardship, undocumented workers and others who work in the informal economy could be excluded.

Ellen Davidson, a tenant attorney at the Legal Aid Society, said: “We have a lot of tenants who work in the gray economy. The only way they’re going to be able to show eligibility is if they’re able to self-attest.”

3. If the relief will come with any conditions for landlords or protection for tenants

Tenant advocates are pushing for a condition that would prevent landlords from evicting tenants for at least a year after they accept relief funds. But the lawmakers we talked to said the governor is proposing a shorter time period.

Wong, of Small Property Owners of New York, was concerned about the impact that this condition would have on small landlords like herself.

She said that telling landlords they can’t evict a non-paying tenant for a period of time after receiving rental arrears could put small owners in a tough position. The landlords, she said, could still further fall behind on building expenses if a tenant doesn’t pay rent during those conditional terms.

“[T]hat is not a good tradeoff,” she said. “It’s not a feasible solution for owners.”

4. What will happen if a landlord opts out of accepting the funds

Some advocates and lawmakers worry that landlords may decide to not accept relief funds so that they can move forward with evicting their tenants.

It’s unclear if landlords would be able to refuse or how the state would handle this. But the federal guidelines for the relief money say it can be distributed directly to tenants if a landlord chooses not to participate.

5. What exactly is in the budget for homeowners and small landlords

Hundreds of millions of dollars from both the federal government and the state are set to provide mortgage relief to homeowners, but how those funds will be distributed remains unclear.

Homeowner advocates are pushing to make sure a program that funds legal aid and housing counseling, called the Homeowner Protection Program, would be fully funded by the state budget.

Ivy Perez, policy and research manager at the Center for New York City Neighborhoods, said: “We’re the last line of defense for a homeowner that is in distress, helping them with foreclosure, helping them access resources like forbearance, aid and loans. We’re providing that assistance to the homeowner.”

Anything else on the table for housing?

Lawmakers and the governor are discussing proposals for two new initiatives that aim to help unhoused New Yorkers.

One is a state voucher program that would be similar to the federal Section 8 program, dubbed the Housing Access Voucher Program.

And under the Housing Our Neighbors with Dignity Act,  the state would acquire distressed hotel and commercial properties to convert them to supportive and affordable housing.

So what can I do about it?

If you feel strongly about the way the rent assistance program will turn out or have questions or concerns, you can contact your state senators and Assembly members.

This article was originally posted on Tenants and Landlords’ Future Hang in Balance Over State Budget. Here’s What That Means