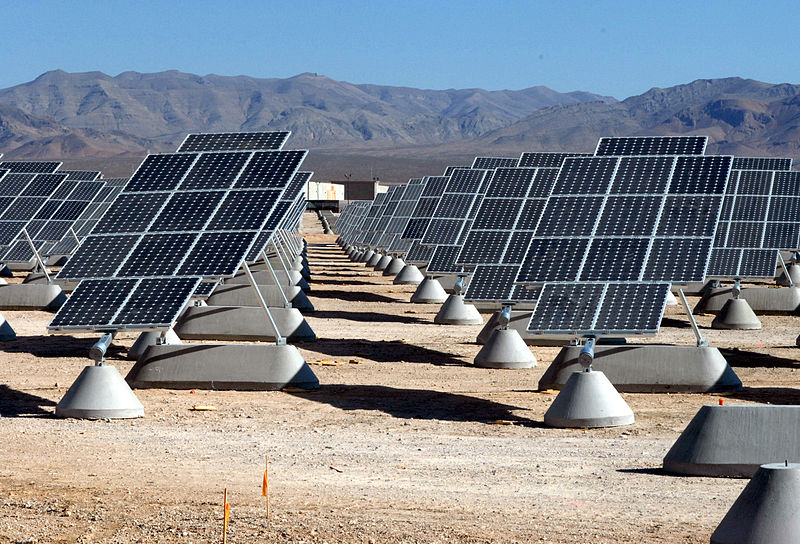 When Stephanie Garcia Richard took the office of State Land Commissioner following the 2018 elections, she had the goal of tripling renewable energy development on state lands.

There were 453 megawatts of renewable energy when she took office. That has more than doubled in the past couple of years and the State Land Office has inked deals for even more future projects.

Angie Poss, a spokesperson for the State Land Office, said 466 megawatts have been added since Garcia Richard took office and, with the upcoming projects, the office will definitely get to the goal of tripling renewable energy on state trust land.

The State Land Office is tasked with managing lands in a way that makes money for public education and other public institutions in New Mexico.

In the past this has been primarily done through oil and gas leasing, which remains a component of the land management.

But changes in societal pressures, concerns about the climate emergency and the transition away from fossil fuels are making renewable energy projects more attractive.

“When we are contemplating the fact that oil and gas is a finite resource, that it will not be as robust for us as a state as a revenue generator as it is now, we have to look at diversifying our economy,” Garcia Richard said. “We have to look at what else we can use to create revenue. And it turns out that it is a multi-pronged approach.”

She said there isn’t a single “bullet” that will make up for the revenue the state currently receives from oil and gas and that the state will eventually not receive. Renewable energy is only one approach that is being taken to help prepare for that day.

The renewable energy projects do not preclude other uses of the land, she said.

“We’ve got multiple uses going on in a lot of these areas where we’ve got grazing and renewable energy and recreation all in the same area,” she said.

Garcia Richard said the State Lands Office received a lot of attention from developers after it started its Office of Renewable Energy early in her term.

“We have now four large wind farms that we have signed in the past couple of years here,” she said. These wind farms will be at least partially located on state land.

These projects range from less than 100 megawatts to the 1,000 megawatt Pattern Energy’s Western Spirit project in Lincoln and Torrance counties that had a virtual ribbon cutting a few months ago.

“I see that as the game changer,” Garcia Richard said.

She said New Mexico “could and should be a renewable energy leader” based on the resources available in the state as well as the Renewable Energy Transmission Authority, which is a quasi-governmental office that is able to own infrastructure and is a partial owner of the Western Spirit transmission line.

State lands do not have the variance requirements that much of the federal lands have for projects like solar, which can make them more attractive to developers.

There are a range of solar projects on state lands. Some of them are solar arrays to power oilfield equipment. The City of Las Cruces is even looking to build a solar array on state land to power city infrastructure. Garcia Richard said this will be an interesting project because it can be permitted for 40 years due to the intergovernmental agreement.

Garcia Richard said the State Land Office has also just signed an agreement for a battery storage facility located on state lands. This project is in McKinley County and is being developed by Solariant Capital as part of the Wildcat Solar project. The project includes 480 acres of state trust land and will encompass a total of 960 acres. It will include both a solar array and battery storage. This is among the first battery storage projects on state land.

“Community solar is a fascinating new proposal and it’s very consumer driven,” she said, explaining that small groups of people who want to come together and set up a solar array are now able to do so without going through the large utilities.

She said the State Land Office is excited to partner with people on the build out of community solar.

Garcia Richard said she hopes in the future she will be able to negotiate the first-ever community solar project on state lands.

“My dream and my goal would be to see New Mexico 100 percent reliant on renewables,” she said.