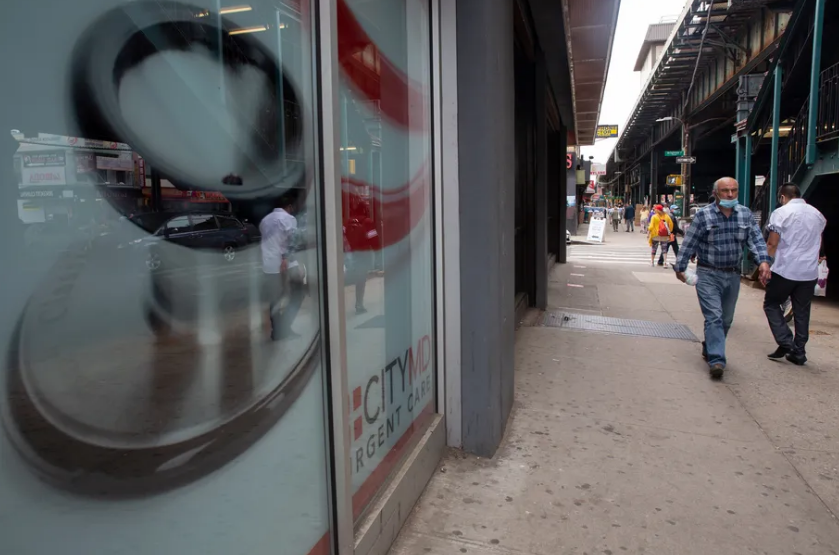 Last month, 47 people died of COVID in the zone stretching from Sea Gate and Coney Island in the west to Sheepshead Bay and Manhattan Beach to the east — accounting for just 1% of the city population but 4% of all virus fatalities, Health Department stats show.

As many as six of the dead had been living at a Coney Island nursing home designated for COVID patients. But even taking that into account, area death and hospitalization rates still far exceed the rest of the city’s.

With one City Council member in the area recently removed from office and the other term limited come Dec. 31, some candidates for the seats have been using their campaigns to urge local residents to take the ongoing threat seriously — and get vaccinated.

They’re battling a disinformation campaign that includes posters with bogus claims about COVID being a hoax and vaccinations causing infertility. The best way to fight the anti-vaccination crowd?

Two out of three Brighton Beach residents are foreign-born — mostly from Europe — and three-fourths of adults speak a language other than English at home. The neighborhood also skews older, with one in four residents over age 65.

Many of Treyger’s constituents speak Russian, Urdu, Spanish, Cantonese or another language at home.

“A number of families get information beyond the traditional media outlets,” he said.

A local Russian-language radio station, Davidzon Radio, is a routine stop for candidates seeking to win over voters in the area. But for Kagan, campaign appearances also serve as a chance to proselytize about vaccines to a sometimes skeptical audience in communities where misinformation has abounded.

“We were on the Russian-speaking radio and talking about the importance of vaccination. It will help a lot to reopen the economy,” Kagan said.

The head of the city Test & Trace Corps has also been on the air, as has the CEO of Coney Island Hospital, Svetlana Lipyanskaya, who speaks Russian — to “get the right information out there to tackle any false claims about this virus and to try to encourage folks to get tested and to get vaccinated,” said Treyger.

“It’s completely different when the head of the hospital says this,” Kagan noted.

Meanwhile, the Council member serving the eastern flank of the area, Chaim Deutsch, was removed from office by Council leadership after pleading guilty to tax fraud — leaving the area without representation until 2022.

Boris Noble was running for Deutsch’s seat but dropped out in March, citing long-haul COVID symptoms that he said left him fatigued and with brain fog.

A former housing policy analyst for onetime Brooklyn Borough President Marty Markowitz, Noble leapt into action to fill a void that opened up when the pandemic shut down local community centers serving many Russian speakers and the elderly.

Noble started visiting residents in their homes to help with translating and filling out documents, such as forms for food stamps and other government benefits — a role the community centers had filled.

Coney Island and Brighton Beach residents “rely — more than anyone else — on community-based organizations and other nonprofits for services,” Noble said. “They literally lost their only resource to get their documents filled out.”

Organizations are slowly coming back to life by responding to COVID-driven needs. The Coney Island YMCA is offering remote-schooling “learning labs” for days when younger hybrid students are not scheduled for the classroom, and last month became a vaccination site.

Sam Moore, the Y’s executive director, said that staff has been reaching out to members to inform them vaccines are available and to assuage any concerns they may have. Members, for their part, also seek to reconnect.

“Some of our members just emailed me because they want to just come by and say hello,” Moore said. “You’re so used to seeing them every day when they come here for a swim. You feel bad because you’re not able to have that connection.”

On the campaign trail, Kagan is constantly being asked when senior centers, a staple in the community, are going to open their doors.

Kagan’s response is simple: “Get vaccinated. That will help.”

With community centers closed, the offices of elected officials have taken on new importance to help residents navigate vaccine appointments, unemployment benefits and other services.

State and city elected officials said that residents who speak languages other than English relied heavily on their offices throughout the pandemic. Assemblymember Steven Cymbrowitz (D-Brooklyn), whose local office is on Sheepshead Bay Road, said there’s still demand for a pandemic-related newsletter his office crafted in English and Russian.

“It’s not just necessary to know what a city agency does, which it is, but it’s also incredibly necessary to do it in a language that people understand and that it’s done with cultural competency,” said Mariya Markh, a former staffer who worked in former Councilmember Deutsch’s Avenue U district office and is now running for his seat.

Citywide, four in 10 residents have been fully vaccinated, and the rate for people 65 and over is 65%.

But in Coney Island, just 30% have been vaccinated, with 34% in Brighton Beach.

That’s less than half the rate of another New York City neighborhood where senior citizens are a similarly large share of the population, Manhattan’s Upper East Side. There, in the 10075 ZIP code, 70% of residents have been fully vaccinated.

Markh said that it would take a sustained effort on behalf of the next Council member to make sure more people get vaccinated in southern Brooklyn.

Earlier this month, she grew more concerned about misinformation after she saw posters in the district promoting vaccine hesitancy and making untrue claims, including that “scientists have grave fertility concerns.”

“Anonymous entities are trying to spread messages that aren’t accurate and aren’t based in any of the science that we’ve seen, telling folks it’s dangerous to get vaccinated,” said Markh. “Making sure that the leaders in communities are spreading the correct message about what the science is behind all of this and why it’s important to get vaccinated is very key.”

Markh is pushing for the City Council to keep Deutsch’s staff employed to help constituents with vaccine appointments and other services, beyond the workers’ scheduled July departure, Bklyner reported earlier this month.

“The relationship that people have with the community has been built upon for years,” she said.

“The elderly tend to be pro-vaccine,” Noble said, “because their point of reference is what they grew up with when they were kids” when students lined up for life-saving smallpox and polio shots.

As in other immigrant-rich communities, locals say challenges accessing vaccinations play a role.

Until recently, there had just been one vaccination site in Coney Island — Abraham Lincoln High School, where it was nearly impossible to get an appointment and even more so for older people who lacked necessary technology or skill.

And then there are the tens of thousands of homebound seniors citywide.

Treyger sponsored a law earlier this year that requires the city to establish a plan to vaccinate homebound seniors and publish regular reports on its progress, neighborhood by neighborhood.

That campaign began in March, then was briefly derailed because it relied on the one-dose vaccine from Johnson & Johnson, whose use the U.S. Food and Drug Administration temporarily suspended after six people developed blood clots.

More must be reached, Treyger said — also noting that the mandated reports have not yet been published.

Even some elderly people who are still physically mobile have hesitated to leave their apartments during COVID, many in high-rise buildings dependent on elevators, he said.

“I’ve heard from folks who are just fearful to step outside because it’s a very small shared space,” Treyger said. “That’s certainly a challenge.”