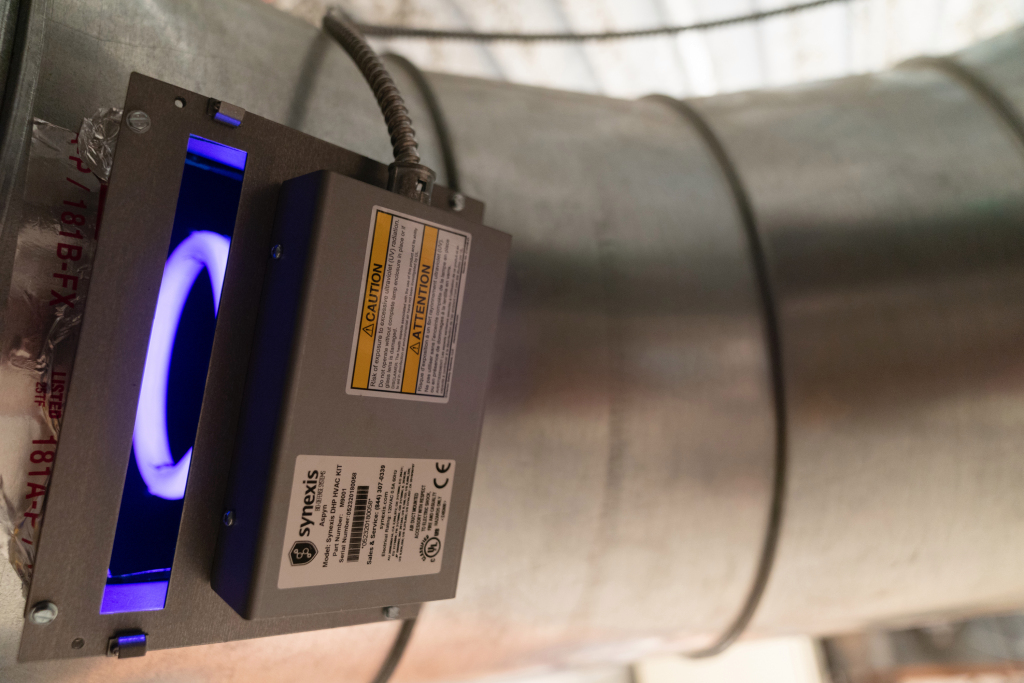 As school districts begin their second semester trying once again to bring students into classrooms, more are adding new layers of protection — this time looking to address airborne transmission of the coronavirus.

They’re adding filters to catch smaller particles, and retrofitting heating and air conditioning systems. And some are trying newer methods to treat indoor air — although experts caution against unproven technologies.

The Denver school district, the largest in Colorado, is working with university researchers to place and track the effectiveness of air purifiers in classrooms across 17 schools.

The Adams 14 district, a smaller district serving students from more low-income families, has spent $1.1 million on new devices for every classroom. The money came from a grant to help schools reopen buildings. The device pulls oxygen and moisture out of the air and pushes out dry hydrogen peroxide that can kill viruses in the air.

In Mapleton, classrooms and buildings have had portable air purifiers since August. Officials are evaluating which rooftop units might need replacing if more money becomes available.

Officials in other school districts including Jeffco and Aurora have said they are reconfiguring heating, ventilation, and air conditioning systems to pull in more outside air to dilute particles indoors. A spokesperson for Jeffco also said the district has one school piloting ultraviolet lights, but did not provide more information. Some districts have also replaced HVAC filters with higher-rated ones that may trap smaller particles. Others, like Westminster, haven’t made any upgrades.

Several researchers said that improving ventilation and air quality are important factors in making school buildings safer, and that administrators are better off sticking with tried and true methods like bringing in more outside air and using higher-quality air filters.

“The way to get the virus out of our indoor air and to make it safer, is to dilute the air and clean the air,” said Shelly Miller, professor of mechanical engineering at the University of Colorado Boulder. “For schools the easiest thing to do is to buy HEPA air cleaners.”

That’s the idea behind a pilot project in Denver schools. Mark Hernandez, a professor of civil engineering at the University of Colorado Boulder, has spent decades studying how to create public spaces with clean and safe air to breathe.

Because of his previous work, months ago philanthropists contacted him to see how to apply his research to help schools reopen safely. With their donations, Hernandez purchased portable air filters and reached out to Denver schools.

“This was: get it to you there, now,” Hernandez said, “with a high probability of success. It’s about protecting public health now — with the tools we have now.”

Around November, when most school buildings were closing for the second time as cases of COVID spiked, Hernandez and about a dozen students and graduates went into schools that DPS identified as having the oldest air quality systems.

Then, when buildings were empty, the team filled schools with carbon dioxide and placed sensors in all classrooms to track how fast the existing systems were able to clear the air.

The team identified the classrooms with the least effective air systems. They also mapped out the optimal locations to place air filters, and placed about 120 filter units in 17 city schools.

The district estimates it would take about $2.5 million to provide all of its classrooms with such filters.

But Hernandez believes that many classrooms wouldn’t need any filters. Some rooms he encountered, he said, “had air exchange as good as CDC recommends for medical exam rooms.”

The classrooms that Hernandez targeted also got new sensors to monitor particles. He created a dashboard that tracks that data live. That will enable district officials to monitor and make adjustments when they see that a unit is not effectively filtering. In such a case, they could increase the motor speed of the unit, change the filters, or move the unit to a more central location in the room.

“High efficiency filtration has been around,” Hernandez said. “It just hasn’t been used in high-density classrooms as much as it could be.”

Mapleton district officials looked into air purifiers in their classrooms following guidance from a Harvard report this summer that described it as one layer of protection in addition to mask wearing and social distancing.

“We looked at what is it going to take to get us back,” said Mapleton Superintendent Charlotte Ciancio. “We used all of the research. And when we researched air quality, really, they talked about air filtering systems.”

Several school buildings in Mapleton are newer and have HVAC systems that were able to be upgraded with the highest-rated filters, but a few of the older buildings, like where Ciancio’s office is, just got extra portable air purifiers.

Ciancio points to the low rates of COVID in Mapleton schools even as rates in the surrounding community soared as her assurance that everything is working.

Last fall, the approximately 9,000-student district had just two outbreaks, as defined by the state, at schools. The district’s dashboard last week identified 200 total positive cases among students and staff since the start of the school year.

In many school districts, the desire to create safer indoor spaces runs into the reality of older buildings that have been remodeled in less-than-ideal ways over the years.

Adams 14 buildings, for instance, can only accommodate HVAC filters up to a rating of 10, which is less effective than the 13 rating that experts suggest. Even the district’s newest building, Adams City High School, built in 2009, lacks an HVAC system that can accommodate a higher-rated filter, district officials said.

“When you have no way of getting outside airflow, that’s a real problem. I think it’s reasonable to think COVID transmission would be higher in those rooms. When possible, those need to be not used, but in some places that won’t be feasible.”

The Adams 14 school district initially focused on increasing the outside air coming into schools. But according to the district’s application for the grant that paid for the new hydrogen peroxide systems, filtering, heating, cooling or otherwise controlling that outdoor air resulted in “unsustainable” utility cost increases.

One company that was already working with the district on career opportunities for high school students recommended the Synexis hydrogen peroxide systems, which it sells. Adams 14 is one of the first school districts to roll out the devices districtwide. The Upper Rio Grande School District and a private school in Vail have already installed systems.

Experts say that the technology doesn’t have a long track record, despite the research that the company touts, and some experts worry that doing chemistry in the air could result in unintended consequences.

The company touts clients like professional sports teams, the Kansas State University, and St. Judes Hospital, though not the one in Colorado. Company officials say they have lots of research that shows their technology is safe.

CEO Eric Schlote said Synexis is presenting research to the FDA to get approval to make more extensive claims about its ability to rid the air of microbes.

Adams 14 officials said they have no concerns.

Several researchers do not think it’s a good idea.

“I do not recommend hydrogen peroxide, spraying any cleaning chemicals into your air or any incense, all of this stuff, especially when the space is occupied,” Miller said. “I know some schools are doing it, but indoor air quality scientists do not recommend it.”

Delphine Farmer, an associate professor of chemistry at Colorado State University, said schools should be cautious about any technology that purports to use a chemical reaction to kill the virus in the air, since any chemical reaction will produce byproducts.

“I would be concerned and I would want to know: If you are using enough hydrogen peroxide to kill viruses, would you also be using enough to change the chemistry inside the building?” she said. “I have grave concerns that I haven’t seen any scientific literature on the efficacy or the other byproducts, which, as a chemist, would want to see studied before it was implemented.”

In particular, Farmer is concerned about the use of bleach fumigation, ion-generating systems, and ozone-generating systems. Some of these are in use in hospital settings, but she said that doesn’t make them appropriate for schools.

Synexis systems don’t generate ozone, Schlote said. Adams 14 did not respond to questions about the cost of maintaining the 427 devices. That ongoing maintenance includes changing a filter, the UV light, and a cartridge-like piece, every 90 days, on each device.

Daniel Stone, said that when he first learned about the district’s investment he was excited. But after looking into the devices and the research more, he was concerned.

“One of their own pages says something that it’s like magic,” Stone said. “I like magic, but not when it comes to my health.”

Stone has been able to continue teaching remotely, and said he wants to be hopeful, and for now he said he’s glad that students and some teachers had the choice to stay home.