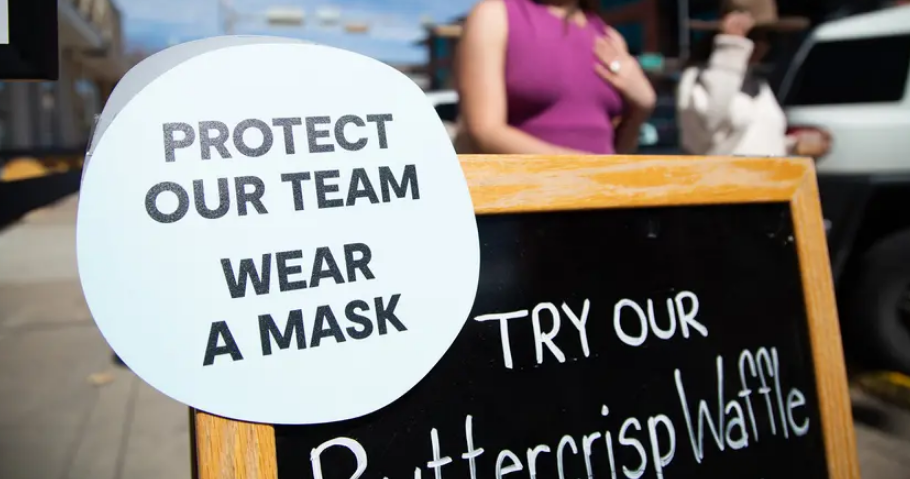 With less than half of Texans vaccinated and the highly contagious delta variant of the coronavirus spreading, the percentage of COVID-19 tests coming back positive in the state has climbed to a rate unseen since winter.

As of this weekend, Texas’ positivity rate is over 10% — a level that Gov. Greg Abbott and the Trump administration had identified as a red flag earlier in the pandemic. Meanwhile, daily confirmed new case totals and hospitalizations are climbing fast, but are far below their winter peaks.

On Saturday, the seven-day average for new confirmed cases in the state was 2,119. That’s nearly triple the average on the first day of the month, when it was 757. Meanwhile, the number of people hospitalized for the coronavirus in the state climbed from 1,591 on July 1 to 2,834 on Friday.

More than 14,200 people with COVID-19 were hospitalized on Jan. 11 — the highest number of pandemic hospitalizations in Texas so far.

But the positivity rate stands out among the rising numbers because experts view it as a leading indicator.

“The early signs are similar. They are all right there,” said Benjamin Neuman, a virologist and professor at Texas A&M University. “Epidemiologists read test positivity stats like the low tide, and it looks as though we are in for a big wave.”

In the last seven days, about 144,000 molecular tests, such as nasal or throat swab tests, were administered in Texas, and 10.2% of those came back positive, according to the Texas Department of State Health Services. The last time the state’s positivity rate was above 10% was in February, and the rate hit an all-time low of 2.8% in mid-June.

The positivity rate does not clearly measure how prevalent the virus is spreading across the state since it depends on the number of administered tests, Neuman said, but “what it indicates is that we are missing a lot of cases.”

“Ten percent of the state is not infected right now,” he continued. “But 10% of the people with the sniffles have COVID, which means we are at the start of something like another wave. We have seen the numbers in the rest of the U.S. go up and Texas has been a little bit behind, but it looks as though we may be catching up fast.”

This comes as the highly contagious delta variant has become the most prevalent version of COVID-19 in the country, which — along with relaxed preventive precautions — Neuman lists as a reason for the rise of the positivity rate.

Public health experts have been raising alarm about the delta variant in recent weeks, especially in places like Texas where the vaccination rate is low. Around 43% of Texans are currently fully vaccinated.

The vaccines have been shown to be highly effective at preventing new coronavirus cases, though there have been some rare occurrences of breakthrough infections — which Dr. John Carlo, the CEO of Prism Health North Texas and president of AIDS Arms Physicians, explained is when someone who is completely vaccinated contracts the virus anyways.

“The reason that is happening more and more is because if we still have people that are unvaccinated circulating with those who are vaccinated, it still presents a risk for breakthrough infections, even though the risk is minimized,” Carlo said.

Evidence also suggests that the small numbers of people who are vaccinated but do get infected tend to face less severe versions of the illness.

“The good news is that though we are seeing breakthrough infections, these are only mild cases,” Carlo said. “The vaccines show great protections but we knew it was never going to be perfect, it’s not 100%. And the big thing to know is that the vaccine removes the high chance of severe symptoms if you do get the virus.”

In a statement, DSHS said the delta variant is “having a significant effect on unvaccinated people leading to increases in new cases and hospitalizations.” Texas officials have not said how many of the new cases are among vaccinated and unvaccinated people, but national and local health leaders say the most severe impacts appear to be happening overwhelmingly among the unvaccinated.

Centers for Disease Control and Prevention Director Rochelle Walensky said this month that preliminary data from several states over the past six months suggests that 99.5% of COVID-19 deaths have occurred among the unvaccinated. The national hospital chain HCA Healthcare Inc., which has more than 40 hospitals in Texas, told the Wall Street Journal that less than 1% of its COVID-19 patients are fully vaccinated.

Recent numbers have caused some local officials to call for new restrictions to prevent the spread. Last week, Travis County officials warned that the average number of daily new cases had tripled and asked unvaccinated residents to avoid gatherings, travel and dining out, and to mask up when they leave their homes.

But city and county leaders can only urge residents to follow those guidelines, since Abbott has limited their power to impose local restrictions. Abbott lifted the state’s mask mandate and business restrictions in March.

A year ago, Abbott identified the positivity rate as a metric he’d track in weighing whether new restrictions were needed. But later in the pandemic, he focused more on hospital capacity, creating a system where restrictions ramped up if more than 15% of any region’s hospital beds were occupied by COVID-19 patients. No region comes close to that metric now, and the COVID-19 patients occupied 4.3% of total hospital beds on July 16.

Still, many experts remain focused on vaccinations above all else. Lowering the number of people the virus could infect is the only way to slow its spread, Neuman said.

“The virus will just grow because that’s the only thing that it can do,” Neuman said. “And as humans we have more options to how we can respond, and that is really our only advantage over things like viruses and bacteria. We can see, plan and respond, and when we give up the one advantage that we have, then we really are at the mercy of viruses.”