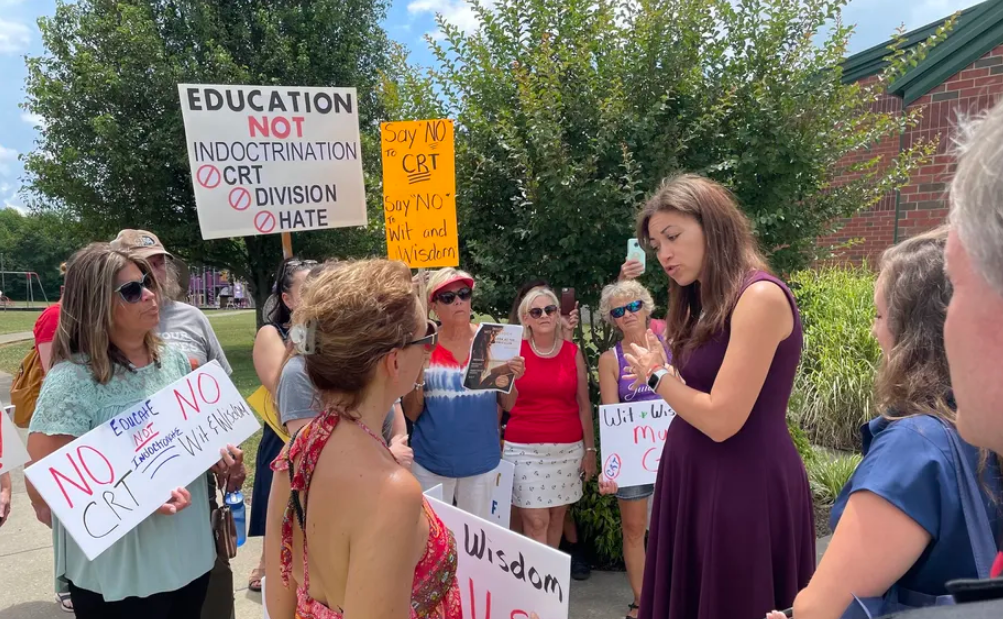 About 40 people, many carrying protest signs, confronted Schwinn outside of Benny Bills Elementary School in Gallatin, the third stop on that day’s four-stop tour of rural and suburban schools outside of Nashville.

The commissioner paused for about five minutes to speak with the Sumner County group before reboarding her bus bound for an elementary school in nearby Wilson County.

The protest was the first Schwinn encountered during her whirlwind road trip of 50 districts in 10 days. The tour, which wraps up on Thursday, has spotlighted summer programs that districts must offer to bolster learning disrupted by the pandemic.

The discussion was civil as Schwinn stopped to listen to the crowd’s concerns about Wit & Wisdom.

“It’s failing in Louisiana; we don’t need it here in Tennessee,” Joanna Daniels, a Sumner County mom and board member with the Republican group, told the commissioner.

Schwinn didn’t answer when Daniels asked what she thinks about Wit & Wisdom but noted that curriculum is chosen locally. She encouraged parents to stay informed and praised them for advocating for their children.

“As a parent, I read every book that is coming in front of my kids,” she told the group.

The protest brought together parents and grandparents in rural and suburban Sumner County. Organizers promoted the gathering on social media and via email through notices that mentioned critical race theory and invited people to “protest the indoctrination of our kids.”

Critical race theory is an academic framework that examines how policies and the law perpetuate systemic racism. A new Tennessee law — spurred in part by the nation’s reckoning with racism and new attention to critical race theory — will limit what teachers can discuss about racism and bias when the new academic year begins.

Great Minds, a Washington D.C.-based publisher, created Wit & Wisdom, which at least 34 Tennessee districts have sought state waivers to use for their younger grades.

A national conservative group called Moms for Liberty has attacked the curriculum for months in Williamson County, south of Nashville. Critics there argue it introduces subject matter before some children are ready for it, while proponents say the materials challenge students to read and analyze at a rigorous level.

Schwinn discussed the curriculum concerns later Wednesday during a previously scheduled meeting with members of the Moms for Liberty chapter from Williamson County. Also present was Rep. Scott Cepicky, a Republican from Maury County, who pushed for Tennessee’s so-called critical race theory law.

“We recognize this is a conversation many communities are having and it’s important for parents to engage in these conversations,” said Victoria Robinson, communications director for the state education department.

The Sumner County school system piloted Wit & Wisdom to third graders in 2018 and has been adding grade levels. The curriculum was taught in kindergarten through eighth grade during the most recent academic year.

Sumner County Schools Director Del Phillips did not immediately respond when his office was contacted Wednesday for comment.