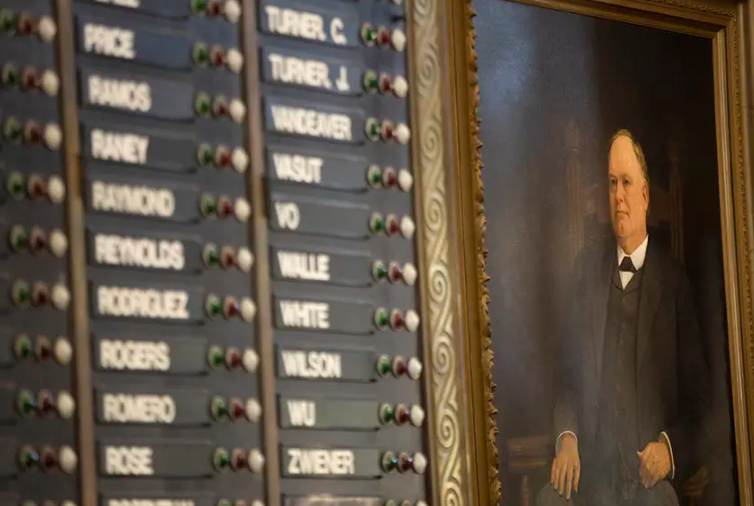 Prospects for many Texas House bills dim if they’re not passed today. Here’s what you need to know.

Lots of legislation that originated in the Texas House this session faces a key deadline tonight: By midnight Friday, the lower chamber has to grant preliminary approval to such bills that don’t have near-unanimous support.

Members of the House are expected to work late into the night Thursday to pass out bills its members have written. And the lower chamber’s calendar is packed with legislation that has been approved by committees and is in line for consideration by the full chamber. But there’s not enough time to get to them all — and it’s not certain that leaders in the House will actually want to.

Sometimes, the late-night proceedings can get tense. Here’s what you need to know.

You can watch a livestream of the Texas House below. The chamber is expected to gavel in at 10 a.m. and could go late into the night.

View a livestream of the Texas House

After failing to wrestle back control of the lower chamber in the November election, Democrats remain the House minority. But the end-of-session deadlines present the party with one of its few bits of leverage to block bills its members don’t support. They can do so by a process known as “chubbing.”

House rules say that any member has 10 minutes to speak on any piece of legislation. To chub, members use their time on multiple bills — asking questions they might not normally ask and generally slowing down the proceedings. That makes it harder for the House to reach bills lower down on the list.

Already, the pace of seemingly low-profile bills passing out of the House has slowed in recent days.

Chubbing has consequences, though. The list of bills eligible for consideration has many bills authored and supported by Democrats, too. One is the CROWN Act, which would ban race-based hair discrimination in schools and work places — such as dress codes that don’t allow dreadlocks.

The death of a bill wouldn’t necessarily mean the death of the idea behind them. A supporter in the Legislature could still find a way to attach the language of the bill as an amendment to another piece of legislation. And the Senate still has until May 26 to pass its own bills and send them to the House. That means measures in House bills that don’t survive tonight’s deadline could show back up in the lower chamber as part of Senate bills.

For months, transgender children, their parents and their advocates have anxiously watched House Bill 1399 in Texas, a measure that would prohibit health care providers from performing gender confirmation surgery or prescribing, administering or supplying puberty blockers or hormone treatment to anyone under the age of 18.

Its aim was identified as one of the Republican Party of Texas’ top priorities for the 2021 legislative session. And though physicians groups and mental health advocates warned that the bill would have harmful effects on transgender children, the measure advanced out of the House Public Health Committee last month.

But as Thursday night approaches, the bill’s future could be in doubt. The House could have taken it up as early as Wednesday, but didn’t get to it — or a lot of other legislation — before ending the day. If the chamber doesn’t get to the bill before midnight, it will fail.

But a Senate committee has already approved Senate Bill 1311 by Sen. Bob Hall, R-Edgewood, which would revoke the medical license of health care providers and physicians who perform such procedures or prescribe such drugs or hormones to people younger than 18. It’s unclear, though, whether that measure has the support of enough senators to reach the floor for a full vote.

This article was originally posted on Prospects for many Texas House bills dim if they’re not passed today. Here’s what you need to know.