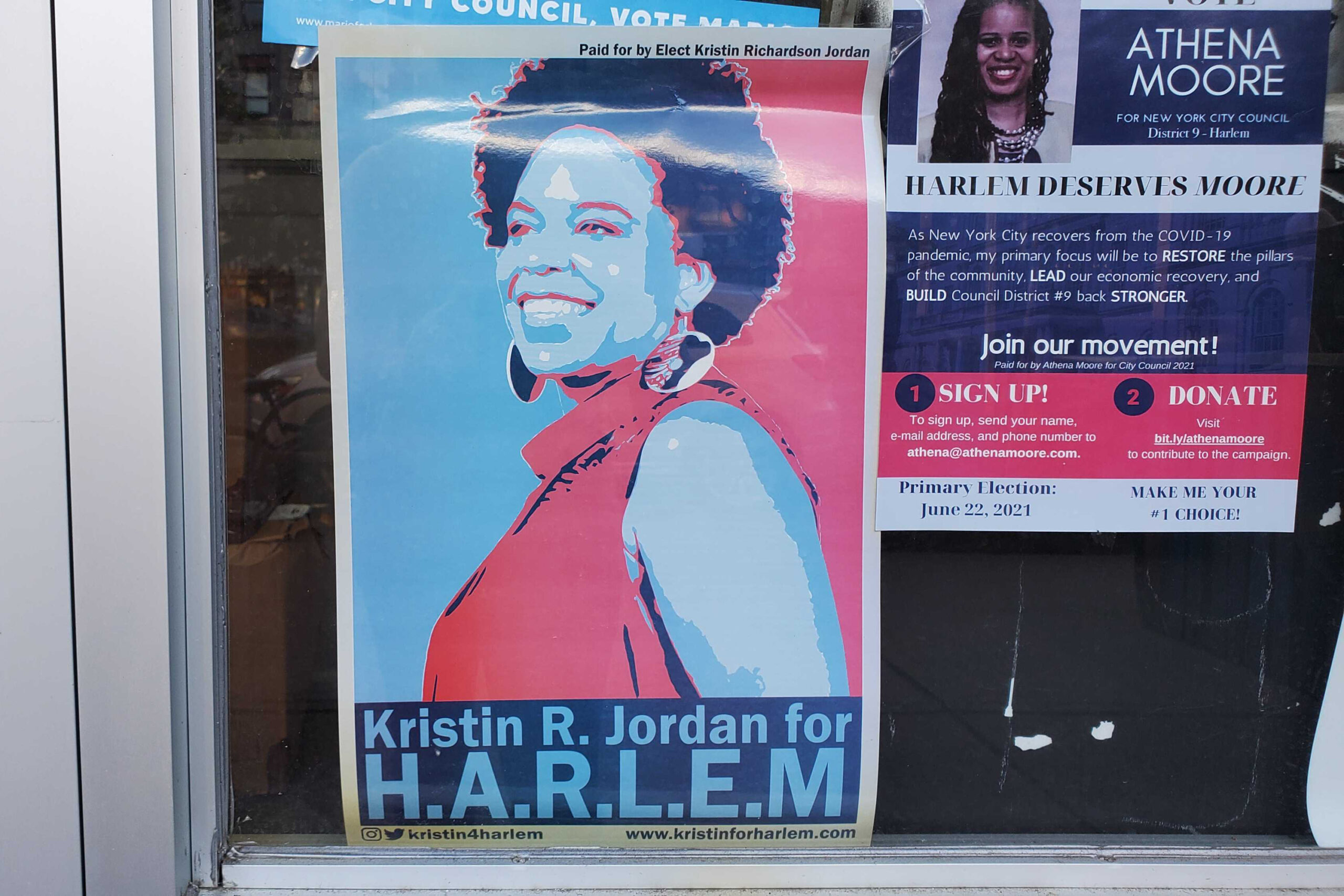 Longtime Harlem politician Bill Perkins is barely holding the lead in a 13-person contest to fill his City Council seat — while a newcomer with little local institutional support is within striking distance of replacing him.

Perkins, 71, and Kristin Richardson Jordan, 34, are neck-and-neck after the count of first-place votes from early and primary day ballots, preliminary Board of Elections results show. Ranked choice tabulations and absentee ballots won’t be calculated until next month

The incumbent — who has served Harlem in the Council and State Senate since 1998 — has struggled in recent years with apparent memory loss and disorientation, THE CITY reported in March. He’s also come under fire by critics who say he’s been disengaged from his Council duties.

Perkins took in just under 21% of first-place in-person votes.

The difference between the duo as of Wednesday evening, with 96% of scanners reporting, was just 294 votes.

“It’s about familiarity. To some people, it’s about who they know,” she said. “That’s the only thing, I think, that can explain it.”

Perkins first served the neighborhood in the City Council between 1998 and 2005, then as the area’s state senator for the next decade. He resigned and re-joined the Council after winning a special election in 2017.

In recent years, residents say Perkins has been absent on neighborhood issues. In 2020, City & State named him the least responsive and least active of all 51 Council members.

Jordan’s second-place finish came as no surprise to her and her team — and they’re confident that ranked choice votes and outstanding ballots will lift the organizer, literacy teacher and artist into the lead after the final tally next month.

The BOE said as of Thursday evening, 2294 Democratic absentee ballots were returned in District 9.

“The establishment, old-world powers-that-be in Harlem slept on us,” Jordan told THE CITY Wednesday. “And you can’t sleep on Harlem.”

The apparently close Harlem race shows the outcome of two very different approaches by the two leading contenders: Tons of field work, outreach and visibility by the younger candidate versus a barely-there campaign from Perkins.

“We went door-to-door during the pandemic and did wellness checks. We did mutual aid and food service work and clothing drives,” said Jordan.

The organizer praised Jordan’s follow-through on promises made at the group’s first protest last June: that she would stick to her message of ‘radical love,’ not be influenced by outside money, and be on the ground with her constituents.

“Because that’s what a public employee is supposed to do,” Gombé said, adding: “It’s a position to take care of the community who is crying for help.”

Campaign spending shows the gulf between each candidate’s efforts. Jordan out-spent all others in the race — $173,323 in total, Campaign Finance Board records show. Her expenses reflect an on-the-ground campaign: Her largest purchases were for event supplies bought from local 99-cent stores, promotional materials, fundraising fees and pay for field workers.

Perkins, on the other hand, spent a scant $4,180 — mostly on flyers and posters in the first week of June, records show.

A request for comment made to Perkins through his longtime aide Keith Lilly, who petitioned to get incumbent on the ballot this year, went unanswered on Wednesday.

On Tuesday, Lilly posted a photo of Perkins posing in front of a truck decked out for his re-election campaign — with no caption.