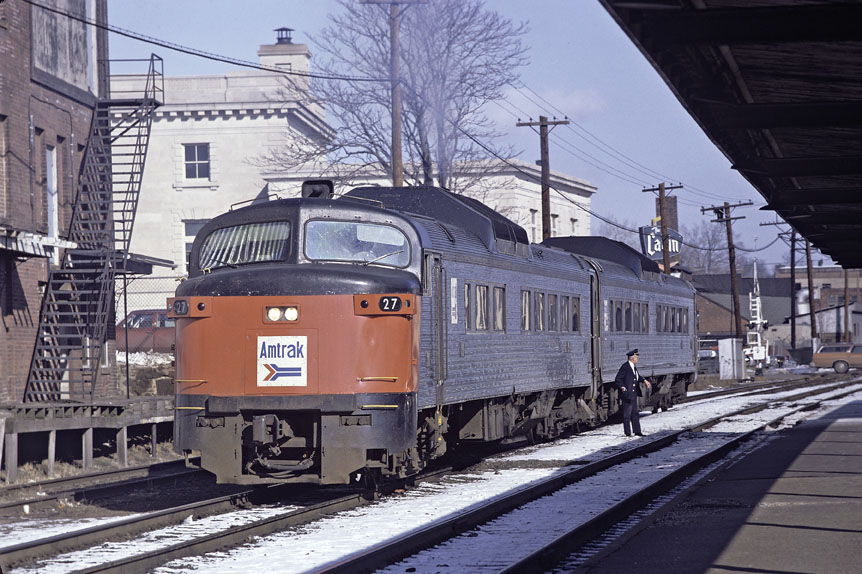 An effort to restore regular passenger rail service through southern Montana is gaining steam, but proponents near and far believe its success will depend on Congress creating a multi-state commission to get trains rolling again.

In December, a dozen communities along the route of the former North Coast Hiawatha passenger train banded together to form the Big Sky Passenger Rail Authority, the first such organization in the state’s history. The effort is being spearheaded by Missoula County Commissioner Dave Strohmaier, who was selected as the board’s first president.

While passenger rail service is still available across the northern tier of the state thanks to Amtrak’s Chicago to Portland or Seattle Empire Builder — albeit at a reduced level of service due to pandemic-related cutbacks — communities like Missoula, Helena, Butte and Billings have not had regular passenger service since Amtrak discontinued the North Coast Hiawatha in 1979. The Chicago to Seattle service via southern Montana — a combination of predecessor trains run by the Northern Pacific and Milwaukee Road — was curtailed during a series of cuts under President Jimmy Carter.

But four decades later, passenger rail advocates are hoping another president will deliver on his promise to spark a “second great railroad revolution.” President Joe Biden has long been considered an ally of passenger rail and even earned the nickname “Amtrak Joe” from his years of commuting by train to Washington, D.C., when he was in the U.S. Senate. Amtrak officials are embracing the prospects of having an ally in the White House and in an open letter to Congress last week, CEO Bill Flynn wrote that the railroad is developing “a visionary plan to expand service across the nation.” In January, Amtrak officials offered their support for reviving rail service through southern Montana, although they have noted that the most successful services are “frequent and reliable ‘corridor’ routes, typically less than 500 miles.” The original North Coast Hiawatha route was more than 2,200 miles long.

The idea to bring back the North Coast Hiawatha has been brewing for well over a decade, and in 2009 Amtrak commissioned a study to see what such a proposal would require. While the tracks the original train used are still in place, the section east of Butte has been out of service for decades, and much of the rest in Montana is now operated by a regional railroad, Montana Rail Link. In order for Amtrak to resume service, the track would have to be upgraded and new stations would have to be built or old ones upgraded to modern standards. In 2009, Amtrak estimated it would cost $1 billion to relaunch the service, but noted that number was subject to “significant uncertainty.”

Strohmaier said his group has not created any estimates of how much it would cost to restore the service. But he believes that with a diverse coalition of supporters, it would be possible to find the funds. Strohmaier proudly noted the counties that joined the new rail authority are run by both Democrats and Republicans.

“In a world of hardened political ideology, I think this is an issue that can transcend divisions and divides,” he said. “It will take time, but I think we’re setting ourselves up for success.”

While support is growing for the train’s return in Montana, success will depend on getting neighboring states onboard, like North Dakota and Idaho. Strohmaier is hoping that Congress will create a multi-state railroad commission modeled after one on the Gulf Coast that has been advocating for expanded passenger rail service in Louisiana, Mississippi and Alabama. The Southern Rail Commission was created by an act of Congress in 1982 and is the only such group of its type in the country.

Knox Ross is the group’s secretary and represents Mississippi. Ross said the congressionally backed, multi-state commission has lent gravitas to the efforts over the years and helped win grants (over $50 million worth) from the federal government. In 1993, the commission helped negotiate an extension of the Sunset Limited, which previously ran between Los Angeles and New Orleans, to Jacksonville, Florida. The train was cut back to New Orleans after Hurricane Katrina knocked out the tracks east of there. While the tracks were quickly rebuilt for freight trains, the Southern Rail Commission has been trying to restore passenger service ever since. Ross said the commission is now on the cusp of getting a new service connecting New Orleans and Mobile, Alabama.

The Southern Rail Commission has been a vocal proponent of the establishment of the Big Sky Passenger Rail Authority and the creation of a commission much like its own in the Northern Rockies. Ross said what’s good for passenger rail advocates in the Northwest is good for those in his region as well.

“A win for passenger rail in any state is a win for all of us,” he said. “We want to see more multi-state compacts because they’re effective. They work.”

The Southern Rail Commission has spoken with Montana’s congressional delegation, including U.S. Sens. Jon Tester and Steve Daines, on multiple occasions about the advantages of its model.

In a statement to Montana Free Press, a spokesperson for Tester wrote that the senator is pushing for the creation of a commission as the Senate discusses its infrastructure priorities. However, he added that Tester’s primary focus at this time “is preserving existing passenger rail routes, particularly the Empire Builder, that are not yet back up to full capacity.”

Proponents of a southern route note that they are not advocating that the North Coast Hiawatha replace the Empire Builder, which serves a region with considerably fewer travel options compared to places like Billings and Missoula, and that the two trains would complement each other.

Strohmaier said he is optimistic that Congress will create a multi-state passenger rail commission in the coming months. Just in case, he is advocating that the Legislature pass a bill that would allow Montana to appoint members to that commission. He said it is important to pass that legislation now, otherwise it would have to wait until the next session in 2023.

For more than 30 years, Barry Green has represented Montana for the Rail Passenger Association, the country’s largest passenger train lobbying group. Green’s top priority is making sure the Empire Builder returns to its daily schedule, but he is supportive of having even more service in the state. He said there are a number of challenges associated with bringing back a passenger train after more than 40 years, including upgrading infrastructure and negotiating track space with the freight companies that own and operate the rails. He said none of that would happen overnight.