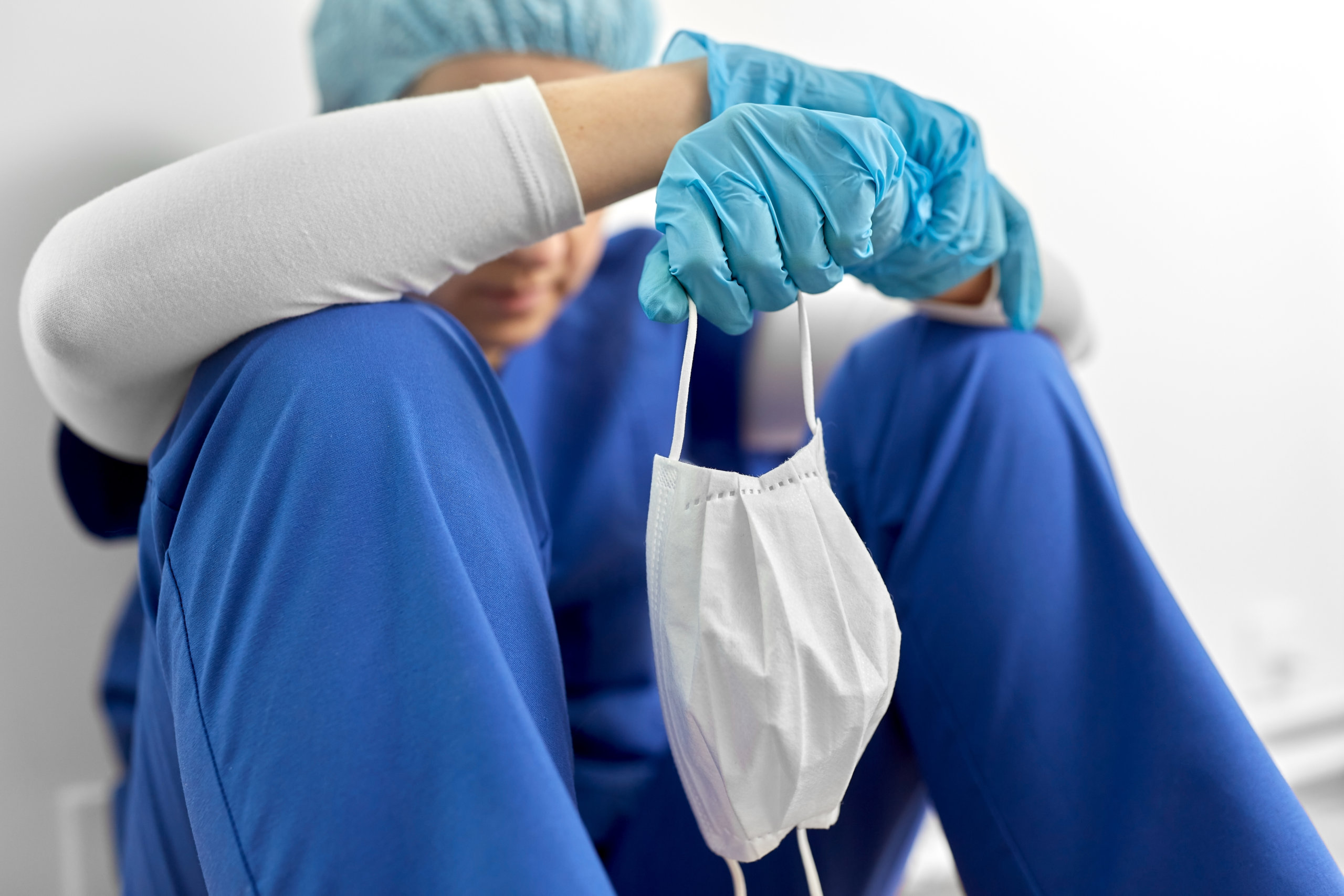 The hospital was full. People were crammed in hallways, in closets, in a repurposed nursery — everywhere a bed could fit.

Nurses, doctors, the whole hospital staff were still scrambling to care for everyone coming into the emergency room. It had been like that for more than a year when a nurse — who spoke on the condition of anonymity so as not to impact future job opportunities — decided she couldn’t go on like that. She couldn’t keep training other nurses fresh from school who’d never worked in a hospital, and others from out of state who were more experienced, but who knew nothing of Albuquerque, or of that particular hospital. She couldn’t hold things together while caring for people barely hanging on or dying in the blur of non-stop 12-hour shifts with no end in sight. So she quit.

“I felt like I was bombarded,” she said. “I could never just work quietly. I was the go-to person for so many. And I was also floated throughout the hospital because of my experience, and I finally said: I’ve had enough. We ran like that for so long, then you see the COVID numbers go down, and you’re hoping to see the light … and the patient load is still going up. And we’re all just kind of looking at each other, like, we still don’t have room to breathe.

The nurse, who worked in an Albuquerque hospital she declined to disclose, went through an experience mirrored by many in the industry, health experts and nurse advocates say. People are burning out, and that burnout is colliding with an already severe nurse shortage at a time when they’ve never been more needed.

“In terms of the toll the pandemic has taken (on nurses), it is not to be taken lightly,” said Deborah Walker, executive director of the New Mexico Nurses Association.

Anecdotally, New Mexico health experts say many nurses have likely left hospital jobs to move to a less stressful nursing role, to get paid a higher wage as a traveling nurse at a hospital in a different state, to work in vaccination or testing centers or have decided to retire, according to Troy Clark, president and CEO of the New Mexico Hospital Association. Some may have left the profession altogether, he said.

But one thing is clear: An already severe nurse shortage in New Mexico is compounding strain and exhaustion on hospital staff, said Eleanor Chavez, executive director of the state’s chapter of the National Union of Hospital and Health Care Employees.

The problem is nationwide. But it’s particularly severe in New Mexico, where vast rural areas and an aging and diverse population with unique health challenges compound the effects of short-staffed hospitals.

“They’re absolutely feeling burnt out,” Chavez said. “If you work a 12-hour day, and you barely get a half-hour lunch break, and you get zero 15-minute breaks, that really wears on you,” Chavez said. “Can you adequately care for your patient when you’re under that kind of stress and you’re constantly going?”

Even after new diagnoses started declining in New Mexico following an aggressive vaccination campaign, the backlog of other pent-up health conditions that went untreated during the pandemic plus the normal routine things hospitals do all the time are keeping them — especially in Albuquerque — full, according to Human Services Department Secretary David Scrase.

With cases rising again, mostly among unvaccinated people, Scrase and other officials say they worry about how a strained and stretched health care system will cope with another potential influx of COVID-19 cases if people don’t heed pleas to get vaccinated.

For now, the hospitalization rate is stable.

But Scrase said during a news conference in late July that he’s “particularly worried” about increases in the spread of the Delta variant of COVID-19 “that could accelerate hospitalizations.

“I can also definitively tell you that we will not have adequate space for everyone if we get up to 1,000 cases a day, and so that’s why we’re urging people to caution. And we will go through the same drill we did before to convert outpatient spaces to ICU beds or hospital beds or whatever it takes to increase our capacity,” Scrase said. “They’re prepared to make the changes they need to make because they’ve been through this now, a couple times.”

The number of new daily cases is nowhere near the last November high. But the number has been steadily rising since July, state data shows.

However hospitals end up weathering the storm, it’s clear the pandemic has strained a system that was already short of nurses and underscored the profound need to retain and train more new nurses.

“We’ve actually been in a nurse shortage … for many many years,” said the Hospital Association’s Clark. During the pandemic, the shortage means “you just get further behind,” and it increases pressure and demand on existing staff.

In May, 13,559 jobs were registered for “health care practitioner” and other technical jobs, including registered nurses, according to a June report from state economists Nathan Friedman and Rachel Moskowitz.

A Legislative Finance Committee study on the nursing workforce released in July 2020 said New Mexico was 6,000 nurses short in 2019, the most recent data available. In 2018 the shortage was 4,000.

Health experts say the problem is multifaceted: not enough nurses are being trained; there aren’t enough locations to place nurses after they finish school; too few want to be in remote, frontier locations in New Mexico, and many are retirement-eligible. That’s to say nothing of how the pandemic might have impacted the shortage.

“Roughly 50 percent of nurses are eligible for retirement,” said Dr. Christine Kasper, dean of UNM’s college of nursing. “I know at UNM … about a quarter of our faculty are retirement eligible. How fast are the current working nurses lost? Is COVID going to affect more people deciding to retire early?”

Although Albuquerque hospitals are the fullest, the nurse shortage is worst in rural areas: Chaves, Curry, Doña Ana, Eddy, Lea, Luna, McKinley, Otero, Roosevelt, San Juan, Sandoval, Santa Fe, Taos, Torrance and Valencia counties all were “severely below the benchmark” for the number of nurses needed in 2019, according to the 2020 LFC report.

The report said the Legislature has invested close to $120 million in boosting the number of nursing degrees and expanding the workforce in response to shortages over two decades, resulting in a 141 percent increase in nursing bachelor’s degrees awarded since fiscal year 2012 and double the number of licensed New Mexico nurses in the same time period.

In the meantime, UNM Hospital in Albuquerque has operated at 111-135 percent capacity throughout much of the pandemic, said Patti Kelley, the hospital’s chief nursing officer. To meet heavy demand on the state’s only level 1 trauma center, they brought in traveling nurses. The hospital currently has 500 of them.

“We have patients waiting basically in every place we can put a bed and give them some privacy,” Kelley said. “We have not been below 100 percent capacity, I would say, for at least the past year.”

The threat of a Delta variant surge “is a big concern for all of us right now,” she said.

Another nurse who wished to remain anonymous for fear of losing his job agreed that the pace has been grueling and relentless. But the longtime Santa Fe nurse said that’s the case everywhere in the state.

“We had the same struggles that were happening nationwide: a shortage of nurses. And it was difficult. Oftentimes we have to give 150 percent where we normally give 100 percent.