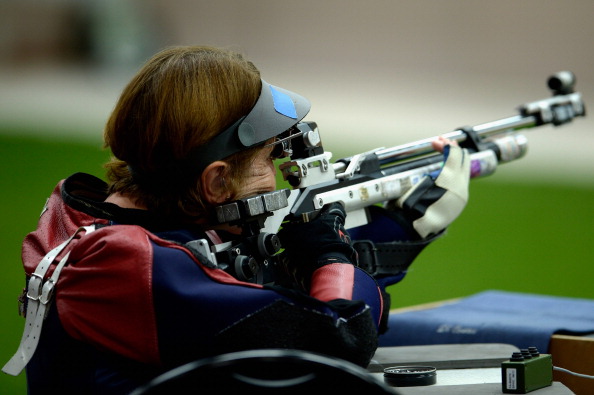 Stanford has won 126 NCAA Division I team national championships, the most of all colleges and universities. UCLA has won 118. Among SEC schools, Arkansas has won the most with 47, followed by LSU with 43.

No Mississippi team has ever won one — not a D-I team championship. Delta State has won NCAA Division II and AIAW national championships. Ole Miss, State and Southern Miss athletes have won individual titles. But there have been no team championships at the highest NCAA level. That could change next week in Columbus, Ohio, and you’d probably never guess in what sport.

Ole Miss will go into next weekend’s NCAA Rifle Championships as the No. 2 ranked team nationally and with a legitimate chance to win the national crown. Here’s something else you probably did not know: The Ole Miss team is made up entirely of women and the head coach is a woman.

They compete against men.

NCAA rifle is a coed sport. Women compete with — and against — men. In the case of the Ole Miss Rebels, they more than hold their own. These ladies can shoot. They have defeated both Army and Navy, which might give you pause until you realize how proficient these Ole Miss women are at what they do.

Says Beasley of the Rebels’ national championship hopes, “Certainly, we have put up scores this season that could win a championship on any given day.”

We will get to that. But first, we should get into a little Ole Miss rifle history here.

The program was born in 1996 back when Pete Boone was the school’s athletic director and the Southeastern Conference was determined to improve its gender equity standing. The SEC mandated that each member school offer two more women’s sports teams than men’s in an effort to alleviate football’s effect on scholarship totals for men and women. At the time, Ole Miss offered scholarships in eight men’s sports and seven women’s sports. Boone did not want to drop a men’s sport so that meant adding three women’s sports. Ole Miss added softball, soccer and rifle, designating the rifle team as a women’s sport. Of the three, rifle was by far the least expensive.

Boone will tell you he never could have imagined what Ole Miss rifle would become, which is a national power. Says Boone, retired and living in Oxford, “It has been amazing to watch.”

If you didn’t know any better — and I didn’t — you would think that the Magnolia State might be a hotbed of rifle shooting prospects. After all, many young Mississippians — boys and girls — grow up shooting at deer, squirrels, doves and ducks. But the sport of rifle is a different kind of shooting, at stationary targets from different positions with both air rifles and smallbore (.22 calibre) rifles.

Although the Ole Miss rifle squad has included a sprinkling of Mississippi natives in the past, the current roster has none from anywhere near the state. Young ladies from New York, Oregon, Minnesota, Illinois, Maryland, Delaware, Texas and Connecticut dot the roster — and there is a freshman star, Lea Horvath, all the way from Hungary. Horvath, part of Hungary’s junior national team, made program history in January, shooting a perfect score in air rifle competition at West Virginia. In so doing, Horvath became only the 12th person in NCAA history to achieve the feat.

Ole Miss rifle recruiting has become international and Beasley credits her assistant coach Jean-Pierre Lucas, a former rifle All American for her at West Virginia, for much of that. Lucas, who competes himself internationally, has upgraded the Ole Miss talent level. Says Lucas, “We’re flat out recruiting the best team we can no matter where they are from.”

And here’s the deal: The Ole Miss rifle program has reached a point where sometimes the student-athletes recruit the school. That was the case with redshirt junior Jillian Zakrzeski from Constantia, N.Y., who reached out to Beasley.

“She took a chance on me,” Zakrzeski says of Beasley. “I walked on and I am grateful for that.”

As is the case with several on the team, Zakrzeski is an honor student. She majors in criminal justice and is exceedingly well-rounded, having competed in rifle, track and field, lacrosse and soccer, as well as ballet in high school.

As all the Rebels, she works at it. The NCAA allows for 20 hours a week of organized practice time. Beasley and Lucas make certain they use all of it. Not only do the shooters practice shooting, they spend much of their 20 hours in strength training, cardio work and yoga to improve their considerable skills. As is the case in all sports, excellence didn’t just happen. Yes, there’s innate skill involved, but they work hard.

Says Beasley, “I think what we are proudest of is how much better our athletes have gotten since they have been here.”

Ole Miss is one of eight schools that qualified for the NCAA team championships. Air Force, Alaska-Fairbanks, Kentucky, Memphis, Nebraska and defending national champ TCU are the others. Of the eight, Nebraska, TCU and Ole Miss are the three that compete with all-female squads.

Yes, there will be pressure — and plenty of it.

“Every athlete has to deal with the pressure,” Zakrzeski says. “You have to just focus, treat it as you would any other match. You can’t treat it like it’s the Holy Grail.”

Perhaps not, even if — where Mississippi and NCAA Division I championships are concerned — the Holy Grail seems a perfect metaphor.