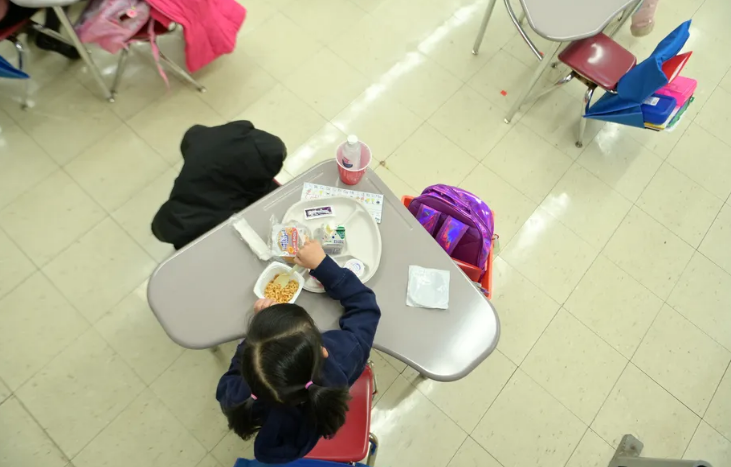 NYC to screen students at all schools, add 500 social workers

That means all schools will soon have at least one full-time social worker or a school-based mental health clinic, according to the plan. These new hires will be placed at schools that don’t currently have a full-time social worker, said Nathaniel Styer, a spokesperson for the education department. Additionally, 90 school psychologists and 30 family support staff, who work with school psychologists, will be hired for 270 high-needs schools, officials said.

While the city has not yet chosen a screening tool, a press release from City Hall said school staffers, including teachers, will be looking for “common signs of trauma and distress in students, and helping better plan next steps in providing care.” Parents can opt their children out of the screenings, Styer said.

Once students are screened, they can be referred to a team of support staff at the school who “can gather more information” and decide what services students should receive, be it a meeting with a social worker or guidance counselor or a visit to the school-based mental health clinic, Styer said.

The plan builds on an announcement from December, when city officials said they would offer mental health screenings and extra support to 830 schools in the 27 neighborhoods hardest hit by the coronavirus. But with billions of dollars in new federal pandemic relief, the city can expand the planned screenings to every school, said New York City’s First Lady Chirlane McCray, who has spearheaded many of the de Blasio administration’s mental health efforts, including this one. Elected officials and community groups have questioned the effectiveness of Thrive NYC — one of McCray’s signature mental health efforts — and criticized its perceived lack of transparency.

“Children will receive individual attention to their emotional well-being. They will have an opportunity to talk about how they’re feeling, how they’re getting along with friends and classmates, how things are going at home — really anything big or small they’re experiencing,” said McCray. “Those are conversations they should be able to have in the best of times, but after the year we’ve had, those conversations mean more than ever before.”

The new investments will cost $91 million next fiscal year, all covered by federal relief dollars, said City Hall spokesperson Laura Feyer. Asked how the program will be sustained when stimulus dollars run out, Feyer said the city is “optimistic revenue will bounce back strong over time as our recovery continues.”

Mental health staffers are also expected to be at every site for the city’s new Summer Rising program, which will combine summer enrichment activities, such as camp, with academics, schools Chancellor Meisha Porter said. That program is expected to cost $160 million — about double what traditional summer school has cost in years past.

Tuesday’s announcement earned praise from City Council Speaker Corey Johnson, who, along with the rest of the council, had called for $130 million to ensure every school had a full-time social worker and guidance counselor. Johnson’s office did not immediately say whether they would still be pushing for more than the 500 additional promised staffers as City Hall negotiates a final budget, which must be approved by July 1.

Grisel Cardona, a parent leader in the Bronx who joined the mayor, schools chancellor, and McCray at Tuesday’s press conference, praised the new investments.

Cardona told Chalkbeat that she was initially hesitant to ask for help when she felt depressed this school year. Unsure where to turn and worried about her daughter’s grades, she reached out to the guidance counselor at P.S. 294 in the Bronx, where her daughter attends school. The guidance counselor and Cardona began talking every Friday for hour-long discussions about “everything.” The counselor also holds regular chats with Cardona’s daughter. Those discussions have helped the family cope, she said.

She said she’s happy that all schools will be receiving extra support.

“I think that when you hear the word[s], ‘only some schools can get this,’ you know, it’s kind of like, hit-and-miss. ‘Well, my school may not get it.’ To hear ‘all’ will get it means a lot,” Cardona said.

This new initiative comes on the heels of the “trauma-informed” curriculum promised for the current school year, along with training for teachers, paid for through a partnership with private donors. Those same donors helped the education department launch a mental health training program that pays parents to become “wellness ambassadors,” who will eventually help lead sessions for the school community.

This article was originally posted on NYC to screen students at all schools, add 500 social workers