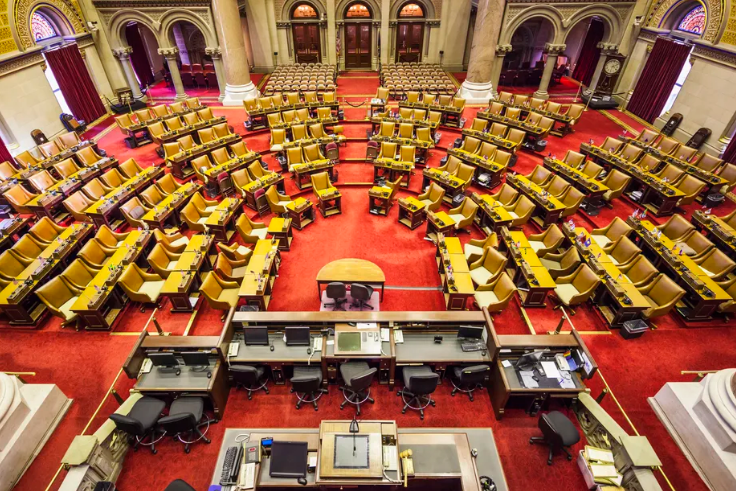 New York City schools are slated to get $1.3 billion more than last year under the state’s budget expected to pass Wednesday, providing a massive financial boost as students and educators rebound from more than a year of disrupted learning.

The state’s budget plan, which covers April 1 through March 30, 2022, would have been hard to fathom last summer, when Gov. Andrew Cuomo warned that a pandemic-fueled budget crisis could mean up to 20% cuts for education funding.

Those dire predictions didn’t come true. Now, the state is flush with billions in federal COVID-19 relief. On top of that, state lawmakers were set to approve tax rate hikes on millionaires and corporations. That will enable school districts across the state to get $3 billion more than last year, according to state leaders and budget documents. That’s in addition to about $13 billion in one-time education relief from Washington D.C., more than half of which is going to New York City schools.

“Schools are in vastly better shape than we would have dared to hope in October or even January,” said Bob Lowry, deputy director for the state’s Council of School Superintendents.

Education advocates are optimistic that this spending plan will help districts create programs for students’ academic and mental health needs not only for the coming school year, but also for years to come as the toll of the public health crisis is likely to have long-term effects.

In a major victory for state education officials and advocates, lawmakers have committed to fully funding Foundation Aid, the formula that sends extra money to high-needs districts such as New York City. Districts will see increases to this funding immediately, as it phases in over three years. Schools across New York are currently owed about $4 billion under the formula, according to previous state figures, with roughly a quarter of that for New York City schools alone.

But the budget details caused concern among some fiscal watchdogs.

Legislators are sending too much support to wealthy school districts, according to the Citizens Budget Commission. The group also worried that raising the tax rate on the richest New Yorkers could drive those taxpayers out of the state, threatening the very revenue that New York’s budget depends on.

Here are the two biggest budget highlights and how they could impact New York City.

The state’s Foundation Aid — which makes up the lion share of the money funneled to school districts — has long been a sore point between education advocates and the Cuomo administration. The formula is the result of a 1993 lawsuit arguing that the state was not providing a “sound, basic education” to New York City schools.

Cuomo has argued that the state fulfilled its obligation from that lawsuit and has boosted Foundation Aid in recent years (with the exception of last year). But the state has never fully funded the formula.

For this new fiscal year, schools will see an overall $1.4 billion boost in Foundation Aid, with a $530 million increase for New York City schools. The budget deal commits to fully funding the Foundation Aid formula by 2023.

New York City uses the state’s Foundation Aid dollars to help cover the individual budgets of its roughly 1,600 district schools through a separate formula called Fair Student Funding. City officials have blamed the lack of Foundation Aid dollars for their own underfunding of schools’ Fair Student Funding money. For this school year, it would cost the city $741 million to fully fund all city schools, including operating expenses as well as fringe and pension costs, according to an analysis of preliminary data from the summer by the Independent Budget Office.

The Alliance for Quality Education, which has long advocated for full Foundation Aid funding, described the new budget as solving a “30-year education equity fight.”

“Generations of parents, community leaders and students across New York State, year after year, have led the advocacy to hold New York to the promise of a sound, basic education for every child,” Jasmine Gripper, the group’s executive director, said in a statement.

Lowry, from the state superintendents council, is cautiously optimistic. The state can only afford to fully fund this formula down the road if there’s enough state revenue, which will also largely depend on New York City’s economic recovery from the pandemic, he said. The last time the state tried to fully fund Foundation Aid was in 2007, and those plans quickly stalled when the recession hit.

But unlike 2007, “the state is actually increasing revenues to help pay” for this, Lowry said. Tax increases passed in this budget are expected to bring in more than $4 billion annually, but such plans have scared Cuomo as well as conservative budget watchers who fear that wealthier residents may flee the state to avoid paying high income taxes, taking a huge chunk of tax dollars with them.

The final budget sets aside $6.9 billion in federal relief to help New York City’s schools recover from a year of disrupted learning during the pandemic. That’s nearly $7,200 extra dollars per student.

The city must decide over the next three years how to spend the bulk of this one-time cash infusion — $4.8 billion from the stimulus package passed in March. It has until 2023 to earmark the rest of the it, from the December stimulus plan.

Just under $1 billion of New York City’s federal relief must go toward combating “learning loss.” New York City has announced a framework for helping students’ academically and emotionally next school year, but details such as cost have not been shared. The mayor is expected to disclose more specifics during his budget update later this month.

City leaders have already announced some investments. They plan to use some of it to expand preschool for 3-year-olds to every city district, though officials haven’t said how much that will cost. The city also used some of it to hold schools harmless for enrollment losses, avoiding having many schools start off next year in debt.

Advocates and elected officials, including Mayor Bill de Blasio, had been worried that lawmakers would use these federal dollars to fill gaps in the state budget, as Cuomo had proposed in January and as he did with first COVID-19 relief package, passed under former President Donald Trump. But this budget was able to avoid that.

Some budget observers are wary that schools might use the jolt in dollars to build programs they can’t sustain once the federal dollars run out, though the promise of a Foundation Aid boost might temper those concerns.

To keep tabs on how the money will be used, state lawmakers called for an accounting of districts’ spending plans.

As a first step, the budget requires New York’s roughly 700 school districts to solicit public feedback on how to spend federal stimulus dollars. Then, districts must post online plans for the money by July 1. And if districts want to use these relief dollars to create permanent programs, they must identify which of their local dollars will be used to maintain those investments “in order to minimize disruption to core academic and other school programs.”

That’s not enough, said Andrew Rein, executive director of the Citizens Budget Commission, who wants more accountability of how the money will help children.

“This education aid increase is not combined with a plan to measure impact,” Rein said in a statement. “New Yorkers deserve to know how the massive spending increase will improve learning and social outcomes for students.”