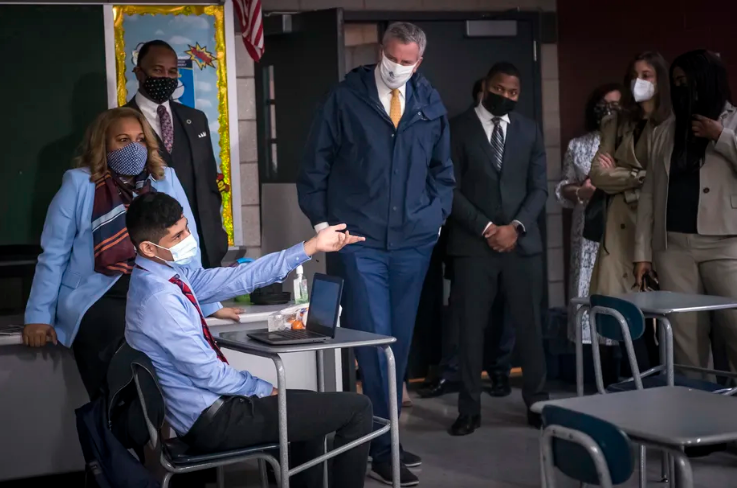 NYC restored funding to schools that lost students. Will principals be able to spend it in time?

By Alex Zimmerman Chalkbeat on April 1, 2021

When New York City officials refunded money to schools that expected their budgets to be cut due to shrinking enrollment, they said the move would come as a relief to principals who are trying to keep students engaged during the pandemic.

As roughly $130 million comes flooding back into the budgets of nearly 900 schools, some principals are funneling the money into evening sessions for students who have incomplete coursework or expanding their supply of library books that feature Black or Latino characters.

But other school leaders said the city’s budgeting rules mean they won’t be able to spend significant chunks of the windfall.

The money must be spent this school year, or it will be forfeited, meaning that schools can’t hire extra staff or buy programming to help catch students up next year, something multiple principals said would be the most effective use of the funds. Schools faced extreme staffing crunches this year as they ran two versions of school simultaneously, in-person and remote, and city officials have not said whether schools will be responsible for any virtual offerings next year.

There are also limits on what the money can be used for and tight timelines for spending it. Even as the vast majority of students are learning remotely, the deadline to spend money on new computers or technology upgrades passed weeks ago, even before the money was returned to schools. The deadline to purchase furniture is the end of March, just over a week after schools learned their budgets would be restored.

“It’s a strange thing: You get money back and you should be thrilled, but it’s somewhat negated when you don’t have an effective way of spending that on students,” said one Manhattan principal who was not authorized to speak publicly.

The principal’s school is receiving hundreds of thousands of dollars — over 15% of its budget — and plans to stock up on supplies and buy desks. But the principal would rather use the money on technology, college and career services, and additional tutoring for next year. The school will likely return at least half of the funding.

“We want this to work for our school,” the principal added, but “there’s no way you effectively use that money. A large portion of that is going to revert back to the education department.”

Katie O’Hanlon, an education department spokesperson, noted that the education department has been flexible with schools, including by extending the furniture purchase deadline from March 12 to March 31. City rules require that any goods purchased this school year must be delivered by June 30.

“Principals and school communities will be able to use these funds for major expenses such as staffing, direct academic, ​social emotional and mental health services, supplies, and other materials,” she wrote in a statement.

In a typical year, schools that enroll fewer students than the city projected are required to forfeit some of their budgets mid-year, as a significant share of funding is directly tied to the number of students on a school’s roster. But enrollment losses were much more dramatic this year: Traditional public schools lost 43,000 students, or roughly 4% of their rosters, dropping more this year than in the previous 14 years combined.

With an expected infusion of at least $4.5 billion headed to the city’s schools thanks to the latest federal coronavirus relief package, city officials announced last week that they would make schools whole, after pressure from local lawmakers and some union officials.

Former schools Chancellor Richard Carranza initially argued that refunding the money would not be the best use of city funds because it would help more privileged schools. And while some schools with few low-income students will receive refunds, about two-thirds of the funding will flow to schools with above-average shares of low-income families, according to a Chalkbeat analysis of city data.

A large group of schools are expecting a significant boost: About a quarter of schools that are receiving refunds, or roughly 230 schools, will receive at least $200,000.

Mark Cannizzaro, head of the union that represents principals and other school administrators, said there is often a budget crunch at the end of the year as principals must comply with the city’s deadlines for making purchases, typically months before the school year is over. Still, he noted it may be especially challenging for some schools to quickly spend the money.

“It’s more pronounced this year for the schools that received any significant amount of money that they weren’t expecting — and that is a concern,” he said, noting that school leaders may not have time to consult with leadership teams that include parents about how to spend the money. The union has requested that principals be allowed to roll over some of the funding into their budgets for next year; the education department did not say whether they are considering such a move.

“I can’t stress enough,” Cannizzaro added, “it’s better than not having it.”

Taeko Onishi, principal of Lyons Community School in Brooklyn, said she is grateful for the funding and is planning to use the money, about $67,000, to build out the school’s library of books that include Black, Latino, and LGBTQ characters. She’s also planning to hire consultants to work with staff to dig into student data and bolster restorative justice work at the school, which serves just over 400 students.

“We really want more staff [next year] but we can’t do that,” she said. “So we’re using it to solve other problems.”

A second Manhattan high school principal — who is receiving more than $400,000 — said some of the money would go toward teacher overtime to staff a night program that runs from 7-11 p.m. to help catch up students who have fallen behind or have had to take on jobs to support their families.

The principal said the school could use an updated computer lab, but would instead funnel the remaining money to furniture and revamping the front entrance to make it look more inviting.

“We’re getting all this money back but the deadline for technology has passed,” said the principal, who wasn’t authorized to speak publicly and spoke on condition of anonymity.

O’Hanlon, the education department spokesperson, said the city “will continue to work directly with any school that has an unmet technology need.”

If your school was eligible for a budget refund, you can see the amount it received by clicking here.

This article was originally posted on NYC restored funding to schools that lost students. Will principals be able to spend it in time?