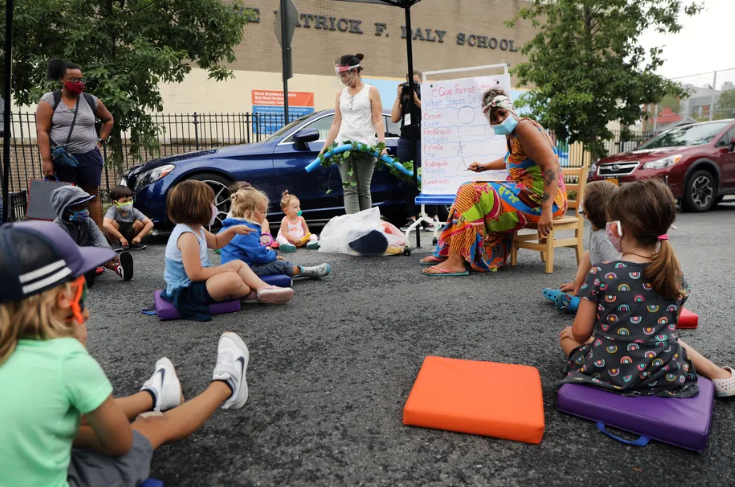 NYC is making summer school available to all students. After a grueling year, will enough teachers sign up?

The promise of a reimagined summer school, with camp-like activities and field trips on top of academic enrichment, sounded like a good plan to middle school teacher Frank Marino.

But Marino isn’t planning to sign up to help staff it, after more than a year of Zoom instruction and a grueling experience with last year’s glitchy summer program.

“I’ve literally been working nonstop since 2019, and I just have nothing left to give,” he said. “Personally, I just need a break.” He plans to take a cross-country road trip, hang out on the beach, and see relatives.

Districts across the country are grappling with how to attract an increasingly exhausted workforce to staff their summer programs, with some offering additional financial incentives. Teacher turnout is particularly important in New York City, as officials are expanding summer school, which will run from early July through the end of August.

Schools Chancellor Meisha Porter envisions the program as “building a bridge” to the coming school year by providing academics and social-emotional support to all families who want it, rather than just children who are behind in their schoolwork. The city is planning to serve as many as 190,000 children, officials said. That’s about 65% more students than the roughly 115,000 who were required or recommended to attend last year.

Pulling off the ambitious summer program rests on a complex set of logistics with a short runway. On top of honing a curriculum, schools must coordinate with the community organizations that will run the camp aspect of the program. Crucially, the program will also hinge on thousands of educators signing up to work after one of the most difficult years of their careers.

“Probably the biggest question mark right now is: Will we have enough staff to cover this entire program?” said Mark Cannizzaro, president of the Council of School Supervisors and Administrators, the union that represents principals and other administrative staff. “We plan to open about 700 buildings when you usually have about 350.”

Interviews with nearly a dozen educators reveal a wide range of attitudes about this year’s expanded summer program, with some eager to sign up. Others are interested so long as they can teach remotely, as many are planning to spend much of the summer away from the city.

For some teachers, a basic issue was getting in the way of signing up to teach summer school: the job application has yet to be posted. An education department spokesperson promised the information about applying this summer would be shared “shortly.”

“With every day that passes, I’m less likely to apply,” said Eleni Filippatos, who teaches in Washington Heights and has begun making other summer plans. “Had this come out months ago, I probably could have planned around it.”

Multiple high school teachers wanted more specifics about what the programming would look like before deciding, expressing concern it will overemphasize making up missing credits.

“If I’m focused on academics and trying to accumulate credits the way we normally would, it’s just draining,” said Christine Montera, a teacher at East Bronx Academy for the Future, who was waitlisted to work last summer and is on the fence this summer. “It becomes, in my experience, chasing students to do work that doesn’t really have a whole lot of meaning.”

History teacher Stephanie Edmonds, who has regularly taught over the summer, was more enthusiastic and hopes to spend part of the program helping students devise their own podcasts.

Summer school classes are typically smaller and offer a chance to create deeper relationships — something Edmonds is looking forward to after a year filled with virtual instruction.

“I haven’t been in the classroom doing what I love, and this is a chance to get back to work with kids in that way,” said Edmonds, a teacher at the Bronx High School for Law and Community Service.

The city’s decision to give individual schools greater control over curriculum and planning was another selling point for Edmonds. Last summer’s program was fully remote and required teachers to use a centralized curriculum and learning platform. Teachers worked with students they had never met, for the most part. The learning platform was glitchy, creating roadblocks for students and preventing teachers from easily accessing the curriculum. Almost a quarter of students never logged on at all, and city officials have yet to release data on how many students completed their coursework last summer.

“It was not a great experience for the students or the teachers,” Edmonds said. “I think they’re trying to be responsive to that.”

Pushing the responsibility to schools and teachers to plan summer programming comes with tradeoffs, especially as school leaders are trying to make plans for next fall. The education department has given schools a total of about $5 million in funding to help plan their summer programs.

“We know principals, staff and community partners are eager to start planning, and we will be working with them closely through the end of the year to ensure they have what they need to make this the most impactful summer ever,” said Sarah Casasnovas, an education department spokesperson. Teachers are not required to teach summer school and are paid extra to take on the assignment. Casasnovas noted that summer school has drawn strong interest in the past, and the city will also draw on staff at community organizations this year.

Some experts recommend taking much of the planning burden off educators to make it more enticing for them to enlist. While the education department is giving schools that responsibility this summer, it is also encouraging schools to use their existing materials.

Matt Brownstein, an assistant principal at P.S. 330 in Queens, said many schools plan to coordinate with teachers from other campuses, and it won’t make sense to use the same curriculum they normally deploy during the school year. He said he’s excited about using some of the planning money to work with teachers to devise lesson plans for the summer but acknowledged it would take time and effort on the heels of a year of nonstop work.

“It’s more work, but it’s the right type of work to be doing,” Brownstein said. “Getting a curriculum handed to you by folks in central that’s supposed to work for every single kid in the city — that’s unrealistic.”

Other school leaders said they are still waiting for crucial details — such as how many children they’ll serve — that will help determine how many staffers they need.

Department officials have not said what social distancing rules schools must follow this summer, which could make a substantial difference in staffing. Elementary schools are currently allowed to use three feet of distancing, but middle and high school students must keep students six feet apart.

The education department has yet to define how the remote learning component of summer school will work and who will be responsible for staffing it. Although city officials are pushing students to attend summer school in person, struggling students who are required to attend, as will those with disabilities who receive year-round education services, will be given a remote option.

“How do we make the logistics of this work in terms of teachers, space, supervision, class sizes?” said Michael Perlberg, principal of M.S. 839 in Brooklyn. “It feels like you’re flying a little blind.”

As New York City and other districts rethink their summer offerings on a compressed timeline, bumps are inevitable, said Jennifer McCombs, a senior policy researcher at the RAND Corporation who has studied summer school programs.

She praised many elements of the city’s approach, including the emphasis on engaging activities and giving schools more autonomy. And while she said a rushed planning process could dissuade some teachers, she also noted that many are eager to keep working with students who have faced extreme hardships this year.

“While teachers are worn out right now, like everyone is,” she said, “they also realize that kids have lost a lot.”

This article was originally posted on NYC is making summer school available to all students. After a grueling year, will enough teachers sign up?