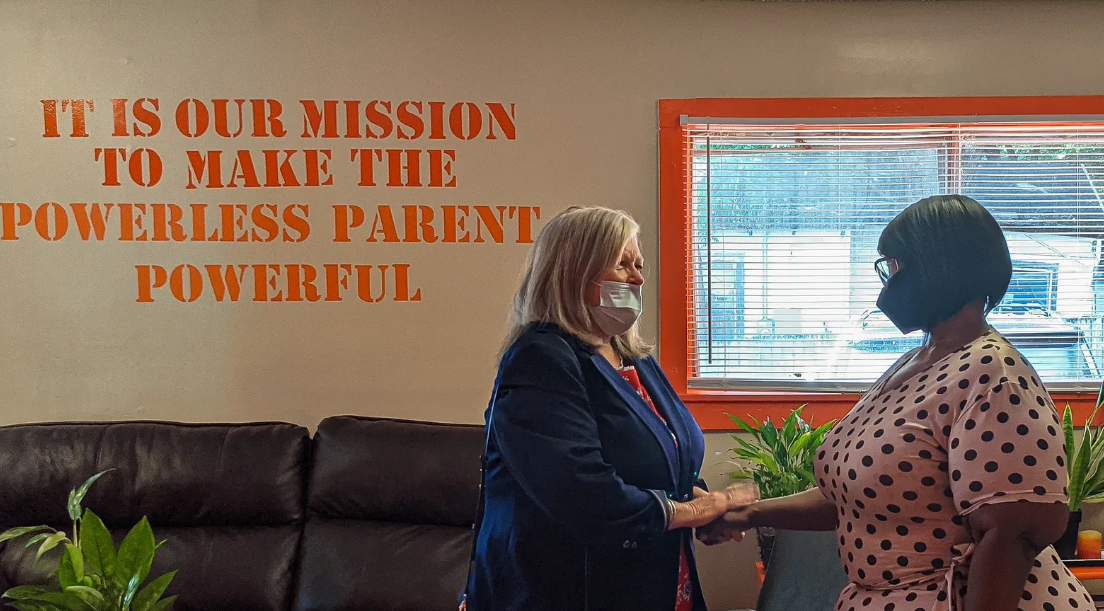 It was a meeting of unlikely allies.

On Monday, Republican lawmakers met with parent advocates from The Memphis Lift at the organization’s headquarters in the Democratic stronghold of North Memphis. In an intimate gathering around an ottoman, about a dozen people from the two camps lamented sluggish academic progress in Shelby County Schools and what they say are problematic communications with district leaders.

By the end of the hourlong meeting, the activists agreed to send bill recommendations for lawmakers to consider when the state legislature, with its Republican supermajority, reconvenes in January.

The Republican lawmakers in attendance were Tennessee House of Representative members Scott Cepicky of Culleoka, near Nashville; Debra Moody of Covington; and Mark White and John Gillespie, whose districts cover parts of Memphis and suburban Shelby County.

No Democratic lawmakers were invited to Monday’s meeting. State Rep. Antonio Parkinson, whose district includes North Memphis, said he wished he had known about the gathering before being contacted by Chalkbeat about it Monday afternoon.

District officials were also not included, and Jerica Phillips, chief of communications for Shelby County Schools, refuted the accounts of poor and patronizing communications.

She added, “Of course, we’re working on the areas where we can support and do a better job, but certainly when there are additional complaints that go to the state level, we’d like for them to be brought to us.”

One of the issues that Teresena Medlock, the director of special education for Memphis Lift, said she has surfaced is that students are being misdiagnosed.

“We still have high schoolers that are graduating that cannot read. We still have children being diagnosed with one disability when really the issue is just the child can’t read,” she said.

But Medlock said that school leaders often minimize her concerns.

“It’s very disrespectful to hear someone talk down to you when you’re expressing to them what you know to be true,” she said. “That’s the attitude that you have to deal with.”

During Monday’s gathering, Republican lawmakers who serve on various education committees in the House, also voiced their frustrations on the slow academic progress of Memphis schools and difficult communication.

“I’m at the point where I am tired of asking questions and not getting the results that we need,” Rep. White said. “If we’re not going to be listened to by certain systems that continue to produce the same old poor results, then we got to do something.”

Cepicky, chair of the education instruction subcommittee, echoed White’s concerns. He added that the district has received more than $700 million in federal relief since the pandemic.

“Now, we’ve always asked ourselves this same question: Do we believe that that money is going to be spent in the best interest of our students in Memphis? And the overwhelming answer is no, it’s not,” said Cepicky, whose proposal to establish a process for state take over of underperforming school districts stalled in a Senate committee this year.

“We want to be number one [in education],” he added. “But we will not get there if we come down to talk to a superintendent of Memphis city schools, and he tells me that I don’t understand Black or brown children.”

A district spokesperson said that the tense conversation Cepicky was referring to took place during a January meeting about COVID precautions and the district’s decision to delay in-person learning.

During that meeting, Shelby County Schools Superintendent Joris Ray, who is Black, wanted to help Cepicky, who is white, understand “the challenges that our Black and brown children were facing in regards to health care access and support and also just the fear of the virus at that time,” said Phillips.

She said that the relationship between Ray’s administration and Republican lawmakers has improved since that low point, and district leaders continue to balance recommendations from Nashville with the district’s desire for local control.

Phillips added that the complaints of poor communication with Memphis Lift were confusing, given that the advocacy group published a statement in March that spoke of productive communications with the district.

Shelby County Schools and Memphis Lift have had a dynamic relationship over the years.

The advocacy organization was formed in 2015 after concerned Memphis parents participated in the Public Advocate Fellowship, a program that teaches individuals about the political process and public interest advocacy. Over the years, the group has received support from pro-charter groups such as the Democrats for Education Reform, the Memphis Education Fund, and the Walton Family Foundation, making some Democrats leery since the charter school movement has gained the most traction in Republican circles.

One issue that has led to hand wringing among lawmakers on both sides of the aisle and parents and district leaders is literacy rates. More than 70% of third grade students in Shelby County Schools read below grade level.

Under a new district policy, Memphis second graders below certain literacy benchmarks will not advance to third grade in the fall, a year earlier than the state’s law that requires districts to retain struggling third grade readers.

In its Destination 2025 strategic plan, the district vowed to have 90% of third graders proficient in reading by 2025. The second grade retention policy should help the district reach this goal since many struggling readers won’t move on to third grade.

Because some parents also struggle with reading comprehension, Memphis Lift members have advocated for jargon-free reports that help parents understand their children’s progress.

District officials acknowledged that they have some work to do around communicating student data in more accessible language.

“I think that’s a fair statement, and that’s why they’re at the table with us to help us get that right,” said Angela Whitelaw, deputy superintendent of schools and academic support.

She added that conversations with Memphis Lift have shaped how the district discusses academic performance.

“We took some of their ideas,” said Whitelaw. “For us, it is a continual process of listening, getting feedback, looking at what we’re already doing, and then coming to an agreement.”

She emphasized that collaborative innovations take time and dialogue.

Sarah Carpenter, executive director for Memphis Lift, said that over the years, the group has met with Whitelaw, Democrats, members of the Tennessee Black Caucus, the education commissioner, and the governor — “anybody who will listen to us about our children.”

During Monday’s meeting, Carpenter agreed to send Rep. White, chair of the House education administration committee, bill recommendations to consider when the legislature reconvenes in January. She also accepted White’s invitation to visit the state Capitol soon to continue the conversation.

She added that she invited the political delegation to the North Memphis neighborhood, where the median household income is around $21,000 a year, because she wanted them to see the reality of many Memphis students.

“When I told people y’all were coming, they said, “You’re talking to them?” Yes, I’m talking to them. Been talking to Rep. White since we got started. And he’s been a friend and believes in the work that we do. You do, don’t you?” she asked on Monday during a moment of levity.

She added, “We got to talk to anybody who will listen to us about our children, no matter what party you’re with.”