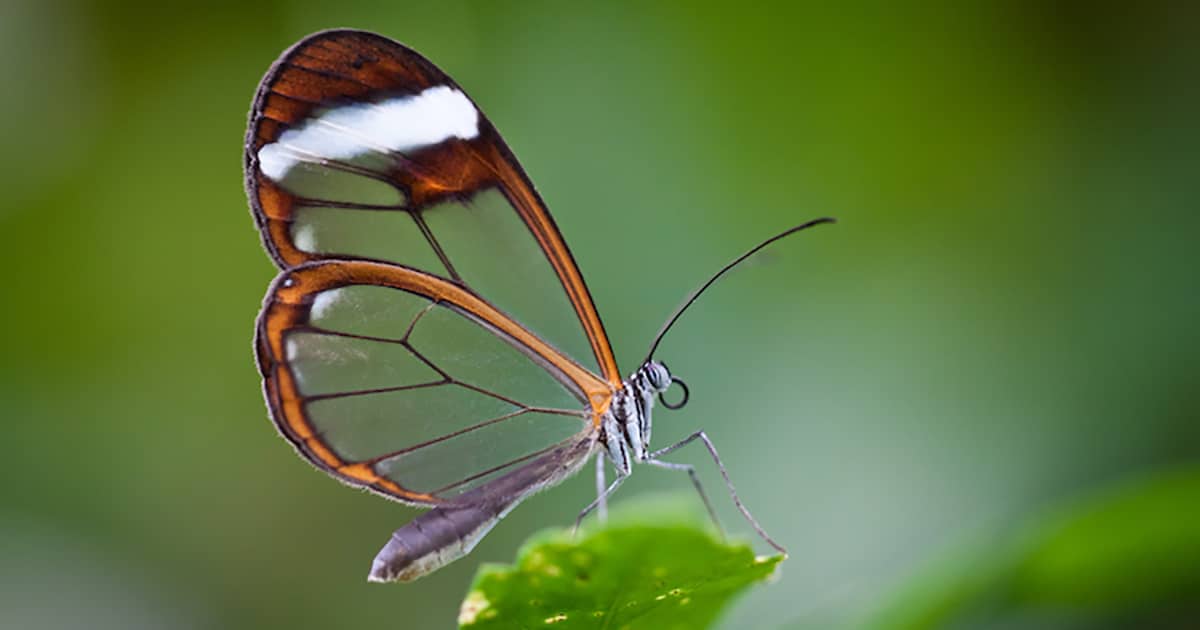 Most butterflies sport colorful, eye-catching patterns on their wings. But some species, like the glasswing butterfly, use mostly transparent wings to hide in plain sight.

To figure out how these Central American butterflies go incognito, researchers put the wings of glasswing butterflies (Greta oto) under the microscope. Sparse, spindly scales overlaying a see-through wing membrane with antireflective properties help make these insects so stealthy, researchers report in the May issue of the Journal of Experimental Biology.

Transparency is the ultimate form of camouflage, says James Barnett, a behavioral ecologist at McMaster University in Hamilton, Canada, who wasn’t involved in the work. Transparent animals can instantly blend into any background (SN: 6/5/19). “It’s really hard to do,” Barnett says. “You have to modify your entire body to minimize any scattering or reflection of light.”

Aaron Pomerantz, a biologist at the University of California, Berkeley, became fascinated by butterflies with transparent wings while doing research in Peru. “They were really interesting and mysterious,” he recalls, “like these little, invisible jets that glide around in the rainforest.”

Using confocal and electron microscopes, Pomerantz and colleagues found that the black rims of G. oto’s wings were densely packed with flat, leaflike scales. But the transparent areas sported narrow, bristle-like scales spaced farther apart. As a result, only about 2 percent of the underlying clear wing membrane was visible in black regions, but about 80 percent of the membrane was exposed in transparent areas.

“You’d think the simplest solution would be to just not have any scales,” says coauthor Nipam Patel, a biologist at the Marine Biological Laboratory in Woods Hole, Mass. But butterflies need at least some scales in the transparent parts of their wings: The water-repellant scales help prevent the wings from sticking together when it rains, he says.

The texture of G. oto’s wing membrane also helps reduce the glare coming off transparent regions of the wing. If the membrane surface were flat, the abrupt change in optical properties between the air and wing would cause light traveling through the air to bounce off the wing’s surface and reduce transparency, Patel explains. But an array of tiny wax bumps coats the surface of the membrane, creating a more gradual shift between the optical qualities of the air and wing. That allows more light traveling through the air to pass through the wing rather than reflect off of it, softening the glare.

The researchers found that the transparent regions of glasswing butterfly wings naturally reflect only about 2 percent of light. Stripping off the waxy layer caused the wings to reflect about 2.5 times as much light as they normally do.

These results may not only help biologists better understand how these butterflies hide from predators, but also inspire new antireflective coatings for camera lenses, solar panels and other devices, Pomerantz says.