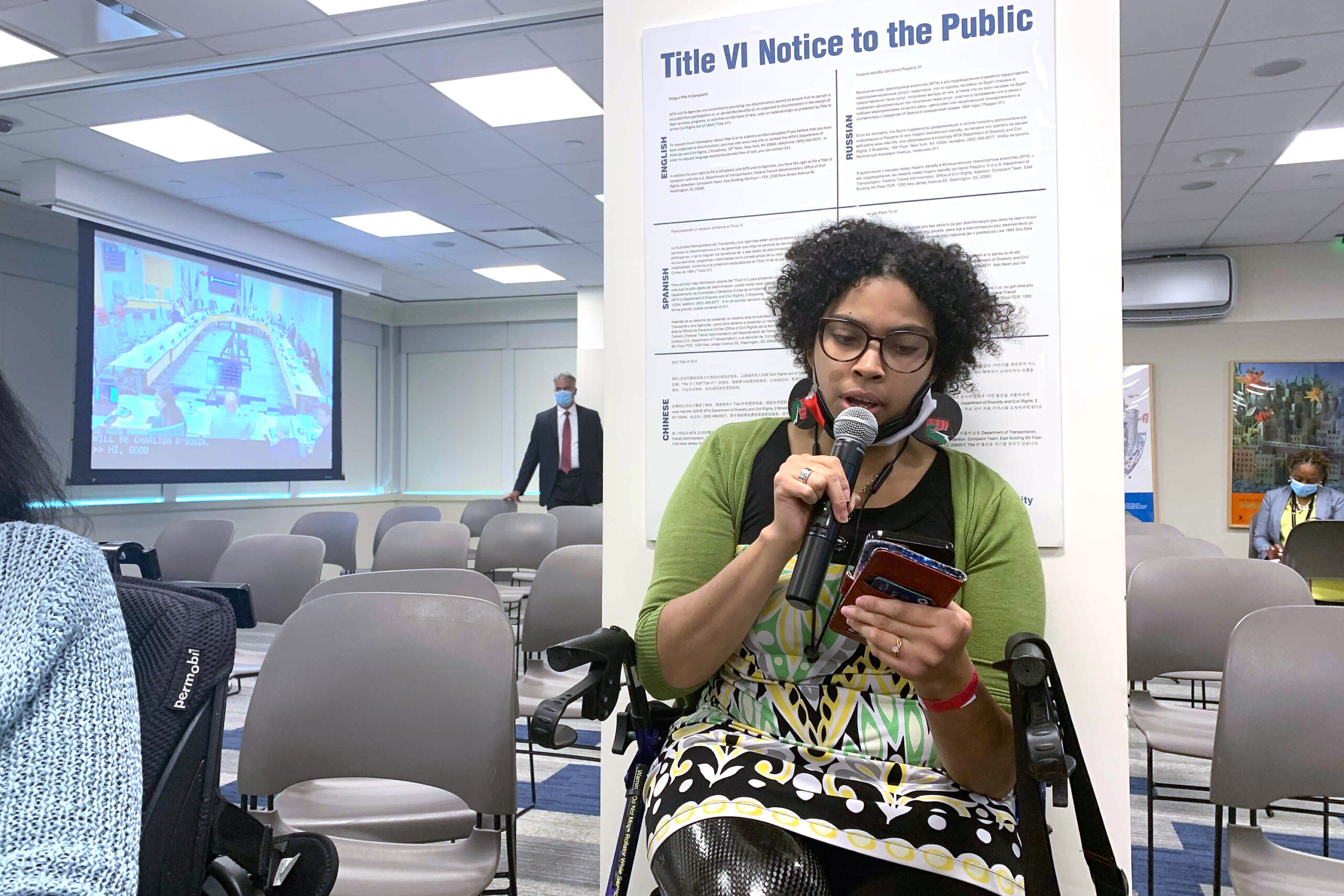 The MTA board’s committees met Monday for the first time since February 2020  — but the return to pre-pandemic traditions meant an abrupt end of remote commenting for anyone wanting to sound off to transit officials.

After nearly 18 months of virtual meetings, MTA officials held the first of two gatherings this week in which public speakers must be present in the boardroom, rather than being able to submit comments days in advance.

For New Yorkers with disabilities or other accessibility issues, the requirement to testify in person means having to travel to Lower Manhattan for meetings that start at 8:30 a.m.

Many rely on spotty paratransit service that has seen a recent surge in driver no-shows, customer complaints and longer times to answer calls — exactly what the riders wanted to complain about to the MTA.

“It’s not that people don’t want to come to the meetings, we certainly want to get people to the meetings,” said Valerie Joseph, a motorized wheelchair user and Access-A-Ride advocate for Brooklyn Center for Independence of the Disabled. “But not everybody can do that, and to force people to do it when you can actually give them another option seems bizarre.”

Eman Rimawi, a double amputee, said she booked a 6:30 a.m. Access-A-Ride trip from her home in Bedford-Stuyvesant, Brooklyn, and didn’t arrive at 2 Broadway, the MTA’s  Manhattan headquarters, until 8:20 a.m. due to traffic.

Rimawi said more people with disabilities likely would have shown up to comment if they felt confident in the reliability of paratransit service.

“I thought like 20 people were going to come today, but now they’re like, ‘Ehhh…’” said Rimawi, an organizer with New York Lawyers for the Public Interest. “They were more interested in the virtual option than in person because they’re nervous and I don’t blame them.”

Another meeting without remote-comment is scheduled for Wednesday.

The return of the twice-monthly gatherings — which included six committee meetings Monday ahead of a full board session two days later — came after Gov. Andrew Cuomo lifted COVID restrictions that had forced the MTA to hold virtual meetings where members of the public and most board members commented via Zoom.

In Monday’s meetings, MTA officials were allowed to weigh in remotely, but not riders.

“I also see board members online, but why can’t the public also comment online?” Rimawi said prior to the transit committee meeting. “Why would you put the most vulnerable customers in that kind of situation?”

Advocates and some board members had pushed for the return of in-person committee meetings, saying the condensed monthly gathering limited oversight and transparency at an agency struggling to bounce back from the pandemic.

The newly restored meetings should have included the option for public speakers with disabilities to testify remotely in real time, advocates said.

When asked why MTA made it more difficult for people to voice their concerns as the pandemic continues, an agency spokesperson simply reiterated the rules.

“Those seeking to comment publicly must be physically present at the meeting,” said Andrei Berman, an MTA spokesperson. “Our 2 Broadway headquarters is well equipped with the necessary tools and infrastructure to ensure that people from across the abilities spectrum are able to express their opinions while facing the board.”

The advocates pointed to a variety of factors that have affected paratransit service. Those include a shortage of drivers that transport New Yorkers with limited mobility, the return of shared Access-A-Ride trips and MTA data that shows one in every five rides arrived more than 15 minutes late in February, March and April.

MTA documents show that no-shows among private companies contracted to provide paratransit service surged more than 246% in May from one month earlier and that customer complaints have increased, too.

The problems come as paratransit riders have returned more at a higher rate than passengers on the subways, buses or commuter rails — officials said weekday paratransit ridership is at about 80% of pre-pandemic levels.

“Access-A-Ride is a half-a-billion-dollar-a-year program that doesn’t work very well,” said Jaqi Cohen, campaign director for the Straphangers Campaign. “People that depend on it should be able to weigh in and by requiring them to show up in person to testify, it creates an unnecessary barrier.”