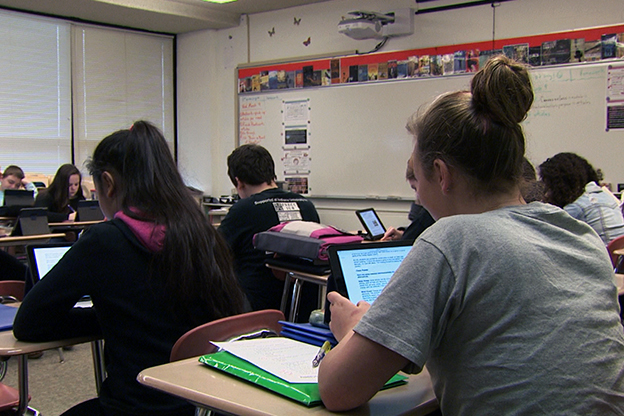 New Jersey students can skip the state’s standardized tests this spring, federal officials suggested this week in a letter to the state.

Instead, the state can administer a different set of academic tests this fall, the April 6 letter said. The Start Strong tests, which New Jersey created, are online tests that are shorter than the ones students typically take each spring.

The Biden administration’s decision is sure to please New Jersey educators who have questioned how they could properly administer tests this spring when some students are still learning remotely. Some educators also argued that the spring tests would squander valuable class time needed for catching students up.

“I think this is generally good news,” Gov. Phil Murphy said during a press briefing Wednesday. “At least for the spring assessments this year, we will be able to put them to the side and focus on the Start Strong for the fall.”

However, the change will not apply to students with disabilities and those still learning English, Murphy added. Those groups must still take state tests this spring that are designed for students with special needs.

The question of whether or not to test students this school year has been a subject of debate nationwide. While proponents say the tests can help reveal how far students have fallen behind during the pandemic, critics say they are a distraction and of questionable value.

“New Jersey students will not have to see their instruction time interrupted to take tests that are not helpful or appropriate under current conditions,” the leaders said, adding that schools will still gather data on students’ learning progress.

This week’s guidance from the U.S. Department of Education comes in response to New Jersey’s request last month for permission to cancel the federally mandated tests that students in grades 3-12 must take each year.

In the request for a testing waiver, New Jersey’s acting education commissioner argued that the results of any tests given this spring would be unreliable because some students might take it remotely while others would take it in person. She added that schools should instead direct their attention to meeting students’ academic and mental-health needs this spring.

“As COVID-19 continues to cause severe disruptions to students’ education, school communities must focus on the social-emotional health, safety, and wellness of their students and staff,” wrote acting Education Commissioner Angelica Allen-McMillan.

Even as New Jersey sought permission to skip the annual tests, state officials told administrators to continue planning for the spring tests. The state education department has not yet sent updated guidance to districts.

During a state Board of Education meeting Wednesday, Allen-McMillan said the department was still reviewing the federal government’s response.

“While we have received a letter,” she said, “it will take us a few days to ensure we are interpreting it correctly and that we are able to move forward expeditiously with very pointed guidance.”

New Jersey developed the Start Strong tests  as an optional tool to gauge where students started this school year in math, English, and science after the pandemic forced school buildings to close last spring. About 90,000 students took the tests last fall, or about 10% of the number that typically take the annual state tests.

The tests suggested that more than 1 in 3 students might need significant help in math and English in order to get back on track, state officials said last month.

This fall, the state will require all districts to give the Start Strong tests, which are aligned with New Jersey’s learning standards. The test for each subject is estimated to take 45-60 minutes to complete.

Some districts will also pilot a new test for incoming kindergarten students, which aims to measure their social skills, reading and math abilities, and physical health.

The U.S. education department under President Biden previously told states that they could not cancel this year’s annual exams as they did last spring, but that they could make adjustments to account for the pandemic. The department has allowed some states to shorten the tests, for instance, but forbade them from making the tests optional or allowing districts to choose what tests to give.

In the letter to New Jersey, the federal official said the state does not require a testing waiver because the Start Strong tests it plans to administer this fall will meet the federal testing requirements.

“Having assessment data that are based on your state’s academic and content standards for as many students as possible is important to provide useful information to parents, educators, and the public,” wrote Ian Rosenblum, acting U.S. assistant education secretary, “and to address existing and increased gaps in opportunity.”

This article was originally posted on Most N.J. students can skip state tests this spring, Biden administration says