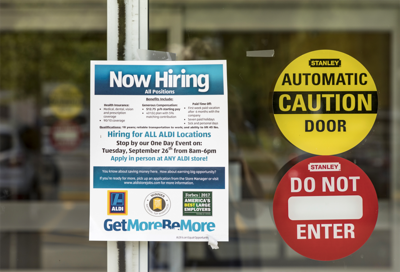 The Michigan Restaurant & Lodging Association (MRLA) released a statewide survey about 1.5 months after COVID-19 restrictions were lifted, finding that despite raised wages, businesses are still struggling to hire adequate staff.

“Restaurant and hotel operators are trying to meet consumer demand that exceeds 2019 with 100,000 fewer workers and skyrocketing labor and commodity prices. Workers are exhausted and profit margins are thin for many despite the resurgent demand,” Justin Winslow, MRLA President & CEO, said in a statement.

The statewide survey was conducted August 3-6 with MRLA members and non-members responding.

“While Michiganians have proven eager to return to a life that includes ample travel and restaurant dining, it has become clear that the nature and speed of this return has placed enormous pressure on the industry and its supply chain,” Winslow said. “Restaurant and hotel operators are trying to meet consumer demand that exceeds 2019 with 100,000 fewer workers and skyrocketing labor and commodity prices. Workers are exhausted and profit margins are thin for many despite the resurgent demand.”

The survey found  88% of hospitality industry respondents are operating with inadequate staffing to meet consumer demand. The data breaks down as follows:

More than four out of five respondents said they’re operating at least 10% below adequate staffing levels, and 29% said they are operating more than 30% below what is needed to meet consumer demand.

Ninety-five percent of restaurant and hotel respondents increased wages in 2021, with half hiking wages by more than 10% this year. More than 70% have increased schedule flexibility to appeal to prospective employees, while half have offered financial incentives.

Additionally, 97% percent reported inflation of commodities this year, with half reporting price increases greater than 10%.

Seventy-three percent of respondents would oppose a New York City-style mandate requiring proof of COVID-19 vaccination to enter most indoor establishments, including restaurants and hotels.

Winslow used survey results to call for additional aid to the industry.

“The existential challenges for the hospitality industry are not yet behind it, which is why it is so important for the Michigan legislature and Gov. Whitmer to come together on a deal in September that prioritizes the hospitality industry in yet-to-be-appropriated federal relief dollars,” Winslow said. “And why Congress should see fit to pass the Save Hotel Jobs Act and secure a second round of funding for the Restaurant Revitalization Fund.”

This article was originally posted on Most Michigan restaurants short-staffed, despite raising wages