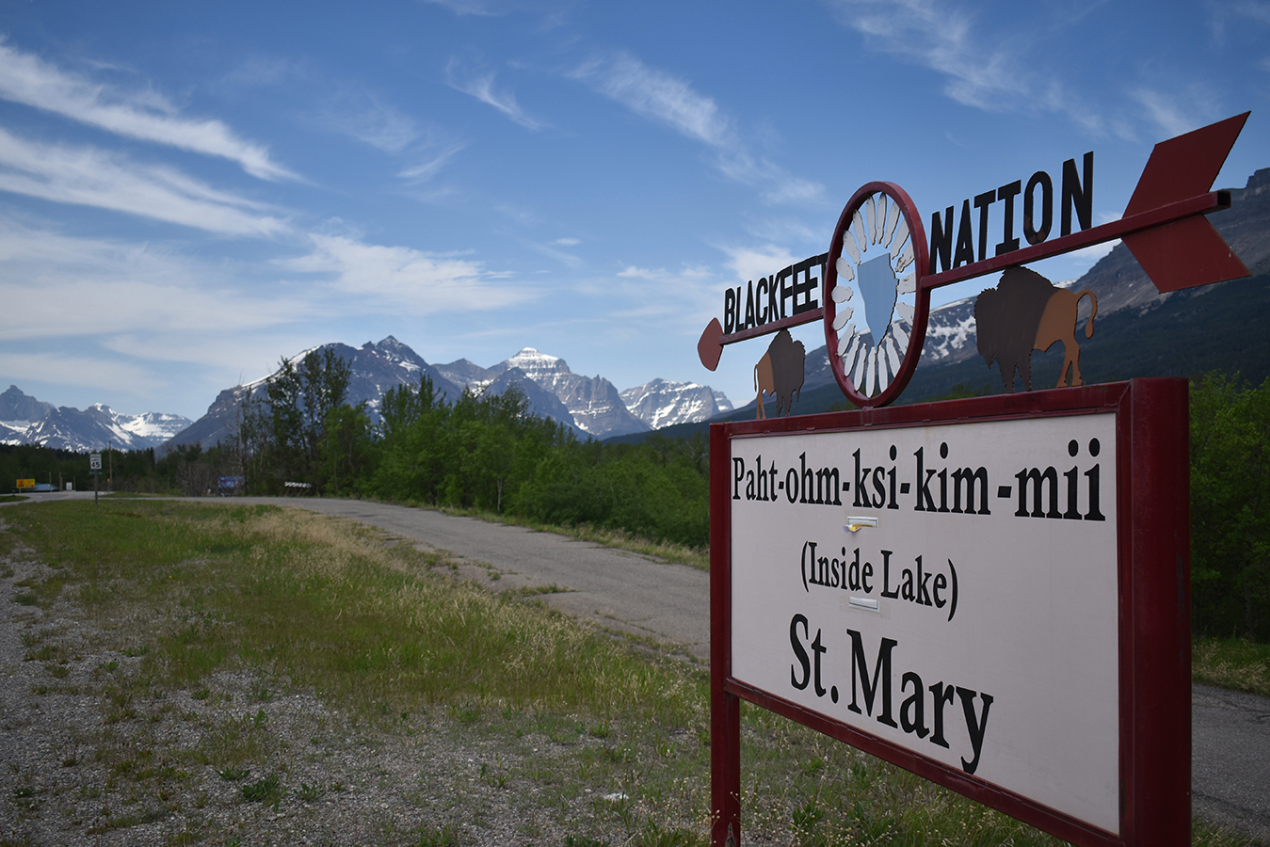 Montana Tribe Welcomes Back Tourists After Risky Shutdown Pays Off

Millions of people will flock to Montana’s Glacier National Park this summer after last year’s pandemic-caused tourism skid, and they will once more be able sightsee and camp nearby on the recently reopened Blackfeet Indian Reservation.

The tourists’ return is a relief to the owners of the restaurants, campgrounds and hotels forced to shut down last summer when Blackfeet tribal leaders closed the roads leading to the eastern side of the popular park.

Those closures fed worries that a major economic driver for residents on the reservation would be crippled. But the tribe’s priority was protecting its elders and stemming the spread of the coronavirus. It worked: The closures and the tribe’s strictly enforced stay-at-home orders and mask mandate led to a low daily case rate held up as an example by federal health officials. Now, boasting one of the highest vaccination rates in the nation, the reservation is back open for business.

On a recent day at the Two Sisters Café, a stone’s throw from Glacier National Park’s eastern boundary, workers stacked dishes and stocked freezers in preparation for a busy season as demand soars for the wide-open spaces national parks can offer during the lingering pandemic.

Susan Higgins, co-owner of the cafe, said she’s seen more traffic whiz past her door than she’s seen at this time of year in nearly three decades. Some passersby stopped and poked their heads through the front door of the restaurant known for fresh huckleberry pies, only to leave disappointed because the restaurant didn’t open for the season until mid-June.

The situation is nothing like last year, when Higgins and sister Beth worried they would rack up massive debt just to survive. With the help of government loans and other grants, they were able to cover their bills and maintain their savings to expand the business.

“When everything happened, we were initially, of course, just concerned about just making it to this year,” Susan Higgins said.

Despite the uncertainty of the past year, Higgins said she supported the stringent measures taken by Blackfeet tribal leaders. The pandemic has disproportionately affected Native Americans, something Higgins is keenly aware of.

“With such a vulnerable population, I would have hated to see what would have happened last year if we had been open, especially with the issue of getting people to mask up,” Higgins said.

Last year, the number of Glacier visitors plunged to 1.7 million after a record 3 million people visited in 2019. Those who did come stayed and spent their money in non-Blackfeet communities on the western side of the Continental Divide.

The measures the tribe took slowed but didn’t stop the spread of covid. Daily cases surged in September, after the Northwest Montana Fair and Rodeo in August and Labor Day weekend, leading to a strictly enforced stay-at-home order, the tribe’s third, issued Sept. 28.

Daily cases then dropped from a peak of 6.4 per 1,000 per day on Oct. 5 to 0.19 on Nov. 7, a 33-fold drop that the Centers for Disease Control and Prevention held up as an example that such restrictions work.

Out of roughly 10,000 reservation residents, fewer than 50 Blackfeet tribal members have died of covid to date. Kimberly Boy, Blackfeet department of revenue director and a member of the incident command team that leads the tribe’s pandemic response, said she is certain their actions saved lives.

“It was the toughest job I’ve had so far in my life,” Boy said. “We had moved aggressively and extremely restrictive[ly] only due to the fact that our primary goal was to save as many lives as we can.”

The efforts bought time until the covid vaccines became available. Then, the tribe mounted a serious campaign that has resulted in about 85% of the total population — over 90% of adults — being fully vaccinated, according to tribal officials. The national average is about 44%, according to the CDC.

The idea for the makeshift clinic was conceived after U.S. and Canadian officials denied requests to ship vaccines over the border, Blackfoot Confederacy Health Director Bonnie Healy said.

“We were joking, and I said that we’ll just have the Canadians from the confederacy stand on one side of the border and you guys vaccinate us over the fence and we’ll get it done,” Healy said.

Healy said that’s exactly happened in a sense, and the clinic was aptly named the “medicine line vaccine clinic,” referencing what the Blackfeet and Blackfoot call the U.S.-Canadian border that separates the different bands of the tribe.

Mark Pollock, a member of the Blackfeet Tribal Business Council, and others said the strong vaccination rate on the reservation in Montana is giving the tribe the confidence to open to tourists this summer.

Pollock hopes the season will go smoothly and covid can be eliminated among tribal members or cases remain very low. However, if cases rise, he said, the tribe could reduce the current 75% capacity limit on dine-in restaurants and bars, as well as reintroduce restrictive measures like curfews and limits on gatherings.

“Whatever it takes to get that number back down, get a handle on it,” Pollock said.

Jackie Conway owns the Heart of Glacier Campground near Glacier’s east gate with her husband, Steve, a tribal member. Conway said even with all 40 of her RV and camping sites booked for the season, she still can’t make up for last year’s 100% loss. Government relief helped the business survive over the past year.

She’s happy there will be a tourism season this summer but knows in the back of her mind that tribal leaders could shut things down anytime.

“The tribe gets spooked pretty easy. So, you just don’t know,” she said.

Angelika Harden-Norman owns the Lodgepole Gallery & Tipi Village just outside Browning, the reservation’s largest city. Standing in the gallery full of artwork by her late husband, Darrell Norman, and other Blackfeet tribal members, she said it’s up to business owners to keep guests safe and make sure this pandemic tourist season goes smoothly.

She used grant money to move her art gallery from the center of her home to another room with better ventilation. She’s also renovated the bathrooms of the two cabins for overnight guests so they are no longer shared.

“I will do my best to take the responsibility … by asking people to wear a mask when they come indoors to check in, to have hand sanitizers,” she explained.

At Two Sisters Café, Susan Higgins stood inside an unfinished drive-thru coffee stand just outside the restaurant. Higgins said she and her sister had thought about building a coffee stand in the past, but it was the uncertainty of how this season would go that pushed them to do it.

Higgins added she is requiring her workers to be vaccinated and hopes that will allow her to avoid shutting down her business this summer. So, for now, the coffee stand will serve as an addition to her business, but it’s also a Plan B should there be another shutdown.

“Primarily it is to assure ourselves of a continued cash flow should we get shut down again,” she explained.

Montana Tribe Welcomes Back Tourists After Risky Shutdown Pays Off