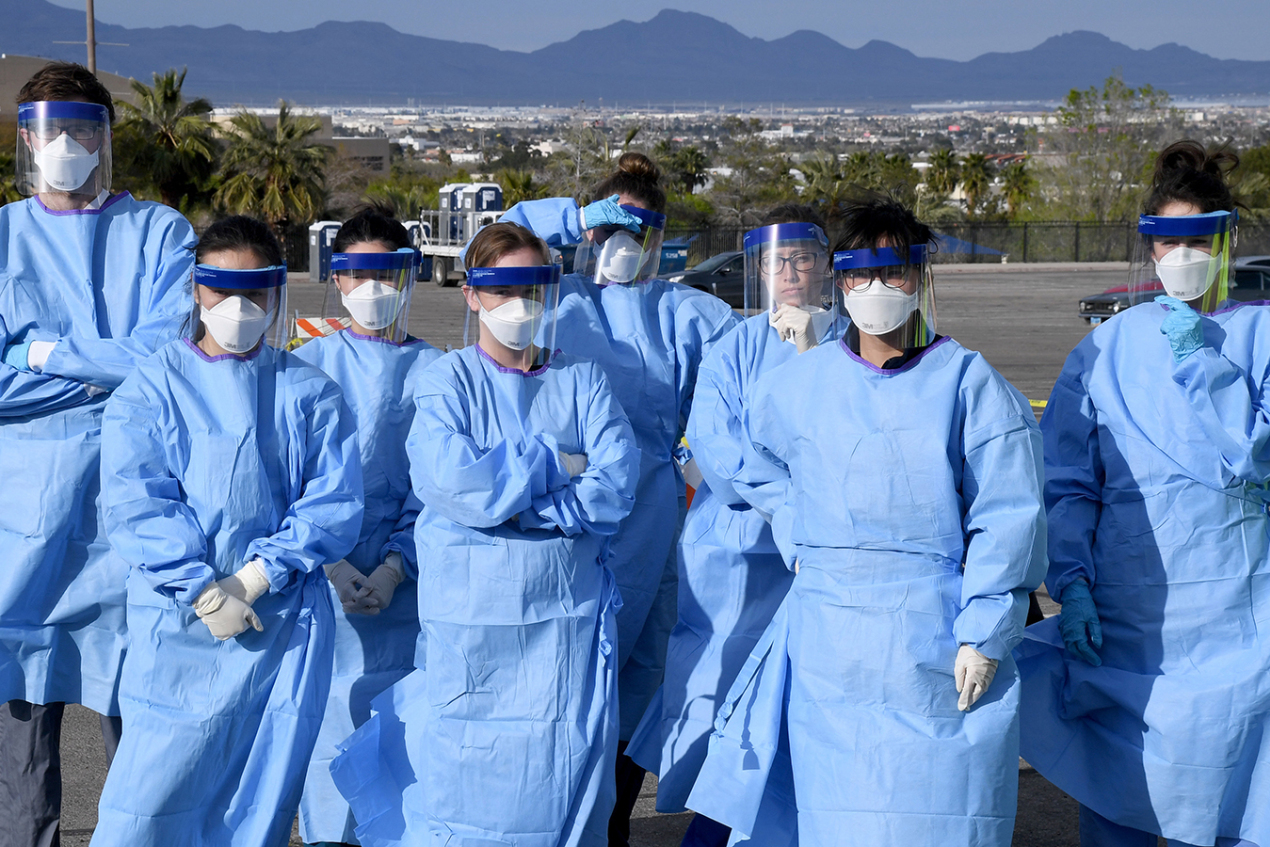 Montana is one of only four states without a medical school, making it fertile ground for one.

What’s happening in this Western state triggers questions about how future doctors will be trained, how that training will be paid for and whether a rural, sparsely populated state can sustain either a nonprofit or for-profit medical school, let alone both.

For more than 100 years, for-profit medical schools were banned in the U.S. because of the early 20th-century schools’ low educational standards and a reputation of accepting anyone who could pay tuition.

Then, a 1996 court ruling forced accrediting agencies to take another look at for-profit medical schools, prompting a resurgence over the past dozen years. Their advocates argue that these institutions meet the same standards and requirements as every other medical school and often are established in communities that otherwise couldn’t fund such institutions.

But those assurances don’t quiet the concerns of skeptics, who warn that the problems of the past will inevitably return.

For years “there has been a sense that we should not risk going back to where the supply of doctors and the quality of doctors is in the hand of for-profit providers,” said Robert Shireman, director of higher education excellence and a senior fellow at the Century Foundation, a progressive think tank that released a report in 2020 critical of for-profit medical schools. “But now essentially we have investment vehicles that are owning for-profit medical schools. That is a recipe for predatory behavior.”

The debate landed on Dr. Paul Dolan’s turf when he read in the Billings Gazette on Feb. 23 that a for-profit institution, Rocky Vista University College of Osteopathic Medicine, planned to open a satellite campus in Billings. Dolan, the chief medical information officer at Benefis Health System in Great Falls, had been working for at least a year to bring a nonprofit medical school to Montana and its population of just over 1 million people.

“There was some irritation locally here because it felt like this was our opportunity and these guys were trying to edge us out,” he said.

Dolan responded quickly, and that same day, the Billings Gazette posted news about another possible med school moving to the state. This time the story featured Dolan’s health system and its efforts to bring a satellite nonprofit medical school to Great Falls, 220 miles from Billings. It would be anchored by the Touro College and University System, a not-for-profit private institution with campuses across the U.S. and abroad, including multiple medical schools.

Rocky Vista University declined an interview request for this story. But Dr. Alan Kadish, president of the Touro College and University System, said the question of whether Montana can handle multiple medical schools isn’t the issue. “The real thing is that the area needs more physicians and there is an opportunity to train them.”

Over a century ago, the U.S. banned for-profit medical schools over criticism that large numbers of commercial medical schools were proliferating and overproducing “under-educated and ill-trained medical practitioners,” according to a Carnegie Foundation report first published in 1910.

In the 1970s, though, for-profit medical schools started to pop up in the Caribbean and were often attended by U.S. students who were rejected for admission by traditional, domestic schools. Then, that 1996 lawsuit regarding accreditation of a for-profit law school opened the door for other for-profit, postsecondary training institutions like Rocky Vista to reenter the U.S. market.

Yife Tien, son of a Caribbean for-profit medical school founder, used this model to establish Rocky Vista and accepted the school’s first class in 2008 in Parker, Colorado. The school gained full accreditation in 2012 from the Commission on Osteopathic College Accreditation. In 2013, the Liaison Committee on Medical Education, which accredits allopathic medical schools, eliminated the accreditation standard that schools be not-for-profit.

Rocky Vista remained the only for-profit school in the U.S. for seven years until another opened in California in 2015. Since 2015, five more for-profit medical schools have opened, and a sixth is scheduled to open in Utah later this year. All but one are osteopathic.

For-profit medical schools have also been proposed in Missouri and Maryland.

The Pros and Cons of a For-Profit Model

Even as for-profit schools become more common, critics predict problems. They warn that the private investors who fund the medical schools are not being transparent about where tuition funds go. They also argue that ownership can be unstable and that students may be taking out enormous loans for a lower-quality education.

The Century Foundation’s 2020 report detailed Shireman’s efforts to identify the investors, board of directors and owners of several of the for-profit medical schools. His findings were murky.

“It’s a web of interconnected [limited liability corporations] where it is difficult to figure out who at the end of the day are the real decision-makers,” he said.

Rocky Vista, for instance, initially owned by Yife Tien, was sold in 2018 to Medforth Global Healthcare Education, a private equity firm that also owns a Caribbean medical school. Most of the other for-profit schools appear to be funded by various individual investors or private equity groups involved in multiple other ventures, such as real estate and mining.

While nonprofit schools reinvest excess funds into their institutions, it’s unclear where for-profits put their excess funds and how much investors may be profiting. Unlike other schools, even private ones such as Harvard Medical School, which post annual revenue and expenses reports, these for-profit schools do not share financial reports publicly on their websites.

KHN asked the existing U.S. for-profit medical schools to share their investors and financial reports. Only two responded, but both declined to comment.

When schools don’t exhibit financial transparency, it can lead to problems, said Shireman; it makes institutions less accountable to their students and can result in lower-quality education.

“That can create a situation where you invest less in excellence and you spend less on actually educating students,” Shireman said. “You charge more to the students themselves and you end up focusing almost exclusively on the easily measurable outcomes — like training people to pass the medical exams, rather than training people to be excellent doctors.”

But Dr. George Mychaskiw, one of the founding deans of Burrell College of Osteopathic Medicine, a for-profit osteopathic medical school that opened in New Mexico in 2016, dismissed these concerns, saying that if a school meets the necessary standards then its business model should be irrelevant.

“It’s easy to paint all for-profit institutions with the same paintbrush, and look at them as an ITT Tech, but it just doesn’t really apply,” said Mychaskiw. “The accreditation standards are so rigorous.” ITT Technical Institute was a for-profit institution with 130 campuses that shut down in 2016 after federal sanctions.

That is also the view of Dr. Kevin Klauer, CEO of the American Osteopathic Association, which oversees the accreditation council.

“If the standards are met, and fairness is provided to the students through those standards, we’re not questioning their structure and how they’re financed if they meet all of the guidelines,” said Klauer.

Another issue for for-profit medical schools, though, is that most are awaiting full accreditation, which is not conferred until the first class graduates. That means students are not eligible for federal assistance and instead must take out private loans that usually have high interest rates.

For the most part, tuition costs for for-profit medical schools are in the range of what nonprofit private medical schools charge. Non-profit medical school tuition and fees for the 2020-2021 school year ranged from a low of $19,425 at Baylor to $67,532 at Dartmouth, according to an Association of American Medical Colleges survey. Rocky Vista’s tuition and fees for first-year students, by comparison, was $58,530, which is roughly $3,000 more than the average cost of an osteopathic medical school for an out-of-state student, according to the American Association of Colleges of Osteopathic Medicine.

The American Medical Association published a report in 2019 that analyzed attrition rates and financial burden of for-profit and nonprofit medical schools. Although the attrition rates were higher at several of the for-profit schools, other statistics were comparable. And since most of these for-profit medical schools are relatively new, data is limited, and it remains to be seen how well their students will perform.

Dr. Nicholaus Mize, a 2015 alumnus of Rocky Vista University and an internal medicine physician at Estes Park Health in Estes Park, Colorado, said he didn’t perceive any difference in his medical education because of his school’s for-profit model.

“I think it was quite equal,” Mize, who is also an adjunct professor at Rocky Vista, wrote us in a LinkedIn message. “I can say that I feel that I received a good medical education. I have stayed friends with many of my classmates and all are doing well in their careers.”

However, Mize did take issue with the size of the student loans he had to take out to get that medical education and the loans’ high interest rates. One year’s charge was especially difficult, he notes — he could only get high-interest private loans because his Rocky Vista campus was not fully accredited at the time.

Dolan said that effort fell through when leaders in the state voiced concerns about the school having a for-profit model. That’s why his organization shifted its interest to nonprofit institutions.

Still, Rocky Vista announced May 17 that its application for the satellite school in Billings had been given a green light by the Commission on Osteopathic College Accreditation, meaning it can begin building the new campus.

As for Touro, the school’s application was submitted in April and a decision on whether to accredit the school will be determined at the commission’s August meeting.