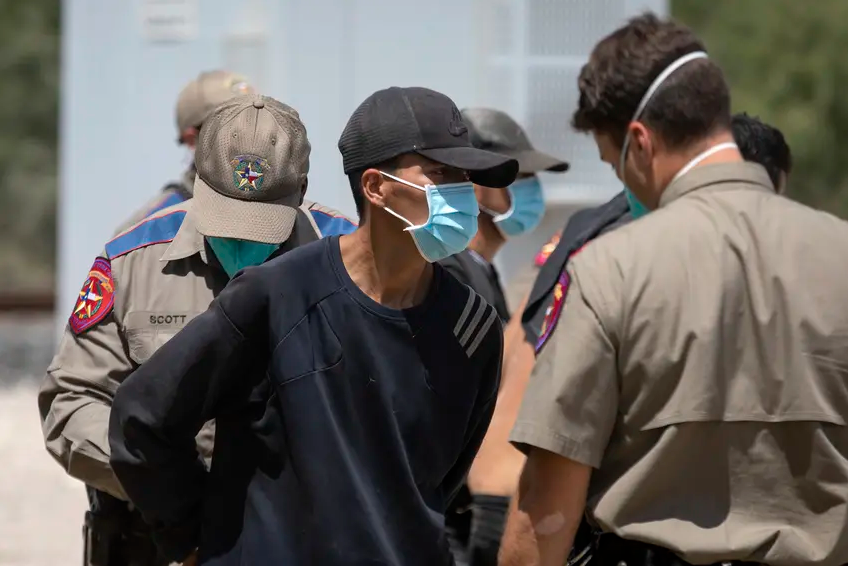 Hundreds of migrants arrested under Texas Gov. Greg Abbott’s “catch and jail” border security push have been sitting in prison for weeks with no charges filed against them, and dozens were imprisoned for more than a month without being appointed lawyers.

Most of the men are Latino and many don’t speak English. Arrested on the border and dropped in prisons hundreds of miles away, they’ve spent weeks or months with little to no legal help, few opportunities to talk to their families and often fewer chances to find out what is happening to them or how long they will be imprisoned.

Citing the widespread violations of state laws and constitutional due process rights that have mushroomed as local justice systems remain overwhelmed by the volume of arrests, defense attorneys and immigrant advocacy groups are asking courts to release the men.

“We can’t have a country or a system where people are being rounded up like this and sort of tucked away and hidden without the oversight and respective rights that the Constitution demands,” said Amrutha Jindal, a Houston defense attorney whose organization, Restoring Justice, was recently assigned to represent dozens of migrants. “The system crumbles without due process.”

Abbott’s office did not respond to questions Friday about the judicial delays. He has continued to praise Texas Department of Public Safety officers for making the arrests and slam the federal government’s immigration policies, which he blames for recent surges in border crossings.

Under Texas law, criminal defendants must be assigned an attorney within three days of asking for one. State statute also requires that defendants be released from jail if prosecutors delay cases by not filing charges quickly. For trespassing, the charge on which the vast majority of the imprisoned migrants were arrested, that deadline is set at 15 or 30 days, depending on the charge level.

Both of those deadlines have fallen by the wayside as Abbott, a former Texas Supreme Court justice and state attorney general, pursues his initiative for state police to arrest migrants suspected of illegally entering the country for state crimes such as trespassing or human smuggling. Since the effort began in July, about 1,000 migrants have been sent to two Texas prisons converted into immigration jails. On Friday, nearly 900 men remained locked up, prison officials reported.

Jindal said her organization was assigned to represent about 50 of those men a week and a half ago, but many had been arrested in early August and sat in prison without attorneys for nearly six weeks. After meeting with the men last week, she said most were unaware whether they could bond out and did not know how long they could expect to stay locked up. For some, the attorneys still didn’t have all their records from the county where they were arrested.

“They didn’t have anyone communicating to them about their cases or their process,” Jindal said, adding that for most of them it was their first time in the United States. “You’re just sitting in jail, and the clerk doesn’t have records of you existing.”

Kinney County, a conservative rural region near Del Rio, has seen by far the most migrant arrests — accounting for more than 80% of all those jailed under Abbott’s initiative on Friday. Jindal said almost all of her new clients who had been without attorneys for weeks were arrested in Kinney, and they were not unique.

Tully Shahan, the Kinney County judge, said Thursday that some men did not request counsel, and even if they had there were no local defense attorneys to take their cases. In a court motion filed this month challenging the new criminal justice system for migrants, Texas defense attorneys and an immigrant rights lawyer argued the arrested migrants were told by local officials to sign documents waiving their right to counsel without knowing what they were signing, as the documents were in English.

Another court petition states that as of mid-September, 300 men had been in prison with no charges filed within the 15-day deadline for trespassing. Most were arrested in Kinney County. The petition was filed by Texas RioGrande Legal Aid, which is defending most of the arrested migrants, and calls for their immediate release on no-cost bonds.

By last week, the county’s misdemeanor prosecutor, Brent Smith, had filed criminal charges against about 50 to 75 men, according to the county clerk. Nearly 730 of the migrants in Texas prisons Friday had been arrested in Kinney County starting in July.

Smith, who took office in January and has repeated anti-immigration rhetoric in memos and spoken against migrants for allegedly causing damage on his property, did not respond to calls or emails for this story.

In neighboring Val Verde County, home to Del Rio where the migrant arrests began, a handful of court hearings — for about 15 to 20 men each — have led to the release from prison of defendants who either accepted plea offers of 15-day sentences, which the migrants had already served, or had their charges dismissed. Those men are sent to federal immigration authorities for either deportation, more detention or release in the United States pending asylum hearings.

Still, about 50 men arrested in Val Verde County had been awaiting formal charges for more than 15 days this month, according to the TRLA petition. Val Verde County Attorney David Martinez said he was unavailable to speak to The Texas Tribune on Friday.

In Kinney County, none of the hundreds of men arrested had a court date set as of last week because of the delays.

Shahan said on Thursday six court dates were being set over the next two months. He explained the delays by saying his county is small — with only about 3,000 residents and a judicial system with few employees. He handles the county budget and operations as well as misdemeanor cases, and Smith is the only lawyer who prosecutes misdemeanors.

“This has been a massive rush of people, and we just had a bottleneck there,” Shahan said. “It’s not an excuse, it’s just a real issue with the sheer numbers.”

Defense groups and county officials agree the local systems weren’t ready for the massive influx of arrests they’ve seen. After arrests began and legal and logistical problems quickly emerged, state officials worked behind the scenes to quickly provide judicial support and pay legal costs. When the state discovered Kinney County had processed more than a hundred men without giving them lawyers last month, officials moved for a new state system to take over initial bookings as it had for Val Verde arrests.

But still there were prolonged delays. To help provide defense services, the Lubbock Private Defenders Office was assigned by the state in July to appoint attorneys to jailed migrants. Shannon Evans, executive director of the office, said they waited on paperwork from Kinney County for weeks in those initial arrests. Once they received court records, they had to sift through handwritten and unorganized court documents to match them to arrestees.

“There was a big gap in communication and the technology part of it [in Kinney County],” she said, adding she believed under the new system the issue would be fixed.

But as time goes on and more cracks surface, the hundreds of men are left waiting in prison, prompting recent court filings to release them from the new system that defense lawyers claim is unconstitutional.

“The program has resulted in a separate and unequal criminal legal system for individuals suspected of entering the United States unlawfully,” said a motion filed in state district court this month by Texas defense attorneys and a national immigrant rights attorney. “In this farcical alternative, constitutional rights are suspended, and due process is non-existent.”

The motion, which is one of a few set to be heard Tuesday in the district court that covers Val Verde and Kinney counties, argues for the release of one defendant based partly on claims that his detention is unconstitutional because he was held for 41 days without a lawyer, and the state’s border security initiative arrests on trespassing charges only men who are primarily Hispanic. In another hearing the same day, state district Judge Roland Andrade will weigh TRLA’s request for the release of 300 men.

In the backlog and chaos, attorneys fear migrants are getting lost in the system. Jindal said her attorneys couldn’t find one of their assigned clients when they went to visit prisons last week. It was assumed he had been able to post bond to be released, but there wasn’t clear communication or documentation detailing that, she said, or any indication if the man would be deported while on bond. For other clients, she said attorneys were hard pressed to find any paperwork describing when or why they were arrested.

“When it comes to people’s rights, the Constitution, the criminal legal system, it’s not really a situation where you should be building the plane as you fly it,” Jindal said.