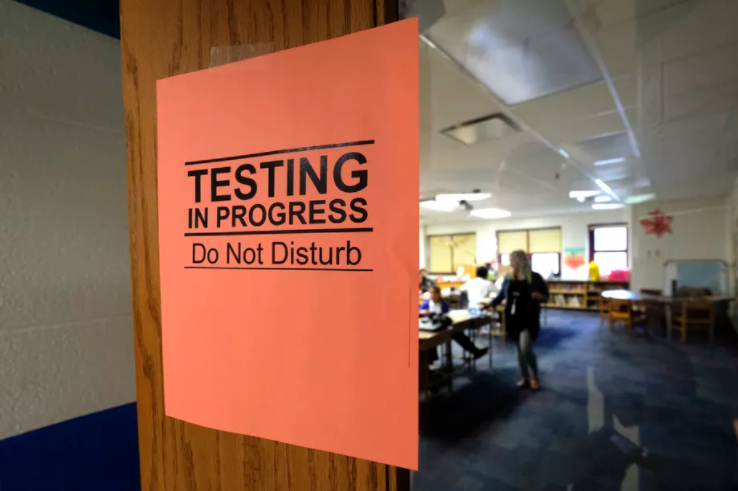 Michigan education officials appear poised to ask the federal government to allow the state to use benchmark assessments — tests that gauge academic improvement at multiple points during a school year — to meet U.S. student testing rules.

Those benchmark assessments, which Michigan schools are required to administer at least twice during this school year, would be administered instead of state exams such as the Michigan Student Test of Academic Progress and the SAT.

State Superintendent Michael Rice said in a statement late Monday that the Michigan Department of Education will reach out to federal education officials “to share the value of the benchmark assessments.”

Rice’s statement came several hours after the U.S. Department of Education announced that states must administer federally required standardized tests this year, but schools won’t be held accountable for the results. The administration said states could give shorter, remote, or delayed versions of the exams.

Rice, who has requested a federal waiver to cancel Michigan exams this year, said the state department he oversees will explore how flexible the federal education department will be.

“I appreciate that, during the pandemic, the U.S. Department of Education has recognized the need for a number of flexibilities,” Rice said. A press release from the department stopped short of saying the state would indeed request a new waiver.

The issue of testing has been hotly debated in Michigan and across the country during this pandemic year. In 2020, as the pandemic shut down  school buildings in the spring — just weeks before Michigan’s standardized exam was to be given — the federal education department issued waivers allowing those exams to be cancelled.

But even before the current school year began, state education officials were asking for another waiver. And in the summer, lawmakers approved legislation that requires schools to administer the benchmark assessments during the school year. School districts can choose their own exams.

Some  educators this year have pushed back against the annual standardized exam, which includes the Michigan Student Test of Educational Progress, the SAT, and several more tests. They’ve pointed to the struggles many students have faced academically from learning online. And they’ve argued that forcing students to take a high-stakes exam — one that is used to determine which Michigan schools need intervention — would be detrimental to students.

The state education department, in its press release Monday evening, noted that “a majority of Michigan students have received inconsistent to no instruction in an in-person format during the 2020-21 school year.”

“When these students return to in-person instruction, the focus should be on teaching and learning and ensuring social and emotional wellness rather than on preparing for and taking state summative assessments,” the department said, repeating arguments made in its waiver.

Monday’s federal announcement received swift pushback on social media, with some Michigan teachers blasting the Biden administration, arguing the year has already been difficult enough for students and teachers. Some called on parents to boycott the tests.

But critics have pushed for moving ahead with state exams, saying that the test results are needed to show student progress  and how much learning loss they’ve experienced this year.

Amber Arellano, executive director of the Education Trust-Midwest, an education research and policy organization based in Michigan, urged the federal education department not to allow states to use local assessments to meet the federal requirements.

“By design, these local assessments do not hold all students to the same standards and expectations. They do not offer appropriate accommodations for students with disabilities or English learners, as required under federal law for statewide assessments,” Arellano said in a statement Monday.