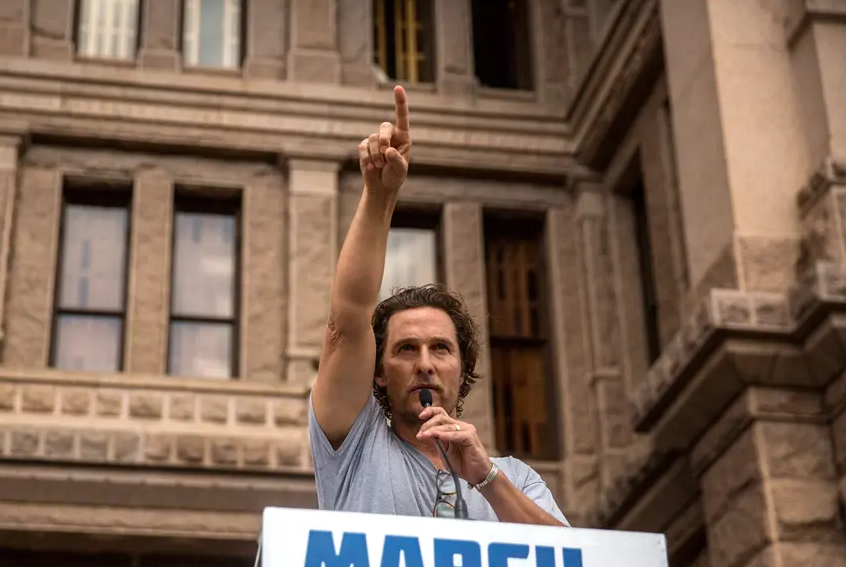 Actor Matthew McConaughey on Sunday removed himself from consideration as a potential candidate for governor after months of toying with a campaign.

In a video posted to his Twitter account, McConaughey, who lives in Austin, said he was honored to be considered for “political leadership.”

“It’s a humbling and inspiring path to ponder,” McConaughey said. “It is also a path that I’m choosing not to take at this moment.”

McConaughey’s video came just over two weeks before the candidate filing deadline for the Texas primary.

Since earlier this year, McConaughey said he was mulling a run for governor, though he did not specify whether he would run in the Democratic primary, in the Republican primary or as an independent. He has previously described himself as “aggressively centrist.”

GOP Gov. Greg Abbott is seeking a third term next year. He has drawn at least three primary challengers, while Democrats got their strongest candidate yet earlier this month when Beto O’Rourke launched his campaign against Abbott.

Instead of running for office, McConaughey said he would continue to support “entrepreneurs, businesses and foundations that I believe are leaders” and “creating pathways for people to succeed in life.”

The prospect of a McConaughey candidacy had intrigued the Texas and national political world for months. Some polling showed he would have been a force to be reckoned with, leading Abbott in a head-to-head matchup.

But McConaughey never did much to elaborate on how he would have run, and he did not seem particularly attuned to political events in Texas. During an October podcast, he displayed a lack of familiarity with the Republicans’ priority elections bill that prompted Democrats in the Texas House to flee to Washington, D.C, in protest this summer.

He more recently courted controversy for coming out against mandating COVID-19 vaccine requirements for “the younger kids.” He later clarified he was specifically referring to mandates for 5- to 11-year-olds.

While some surveys suggested McConaughey could be a real contender, some in politics theorized that he was benefiting from being a political blank canvas to most Texans. That group included O’Rourke, who has crossed paths with McConaughey over the years.

“He’s a really popular figure whose political views have not in any way been fixed,” O’Rourke said in September. “I don’t know, for example, who he voted for in the most consequential election since 1864 in this country. I don’t know how he feels about any of the issues that we’ve brought up. … So I think that might explain part of [the polling].”