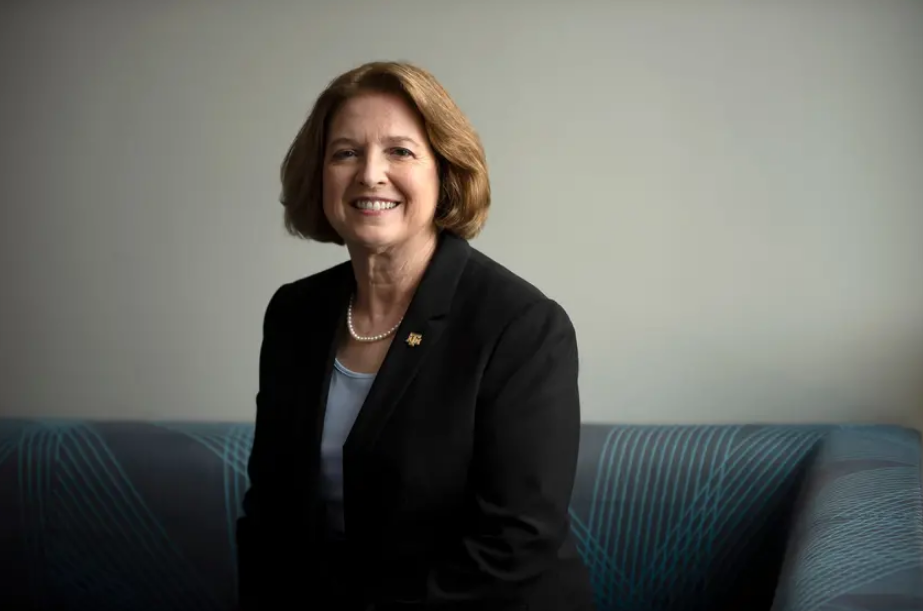 When M. Katherine Banks became the new engineering school dean at Texas A&M University in 2012, an associate dean drove her to the Zachry building, the heart of the university’s engineering program in College Station.

He pulled into the basement-level garage and honked the horn twice — a preventive measure to scare off skunks that infested the aging facility.

Above them, the building reeked of mold. Engineering students not-so-lovingly dubbed it the “Zachry Smell.” Inside the building’s lecture hall, a once-impressive revolving stage, was broken.

She commissioned 10 original art pieces, all inspired by science, technology and engineering, for the half a million square foot building that now enrolls more than 21,000 students — nearly twice the number of students from when she started. Many leaders within Texas A&M point to the center as a physical testament to her success running the college, which now enrolls nearly a third of all of Texas A&M’s student body.

“The house that Banks built,” an assistant vice chancellor joked last week during a tour of the facility, causing Banks to cringe.

“I don’t know where that [phrase] came from,” she said modestly.

Banks is not typically one to seek out attention, but starting June 1 she’ll enter the spotlight as the 26th president of Texas’ biggest university, the second woman to ever run the flagship campus.

She takes over as Texas A&M faces multiple challenges, including how to navigate a return to “normal” campus operations after the COVID-19 pandemic upended learning and campus life. She’ll also take the reins of a diversity and inclusion plan meant to increase students and faculty of color after a year where conversations about racial injustice and inequality on campus took center stage.

The Board of Regents last week approved her as the next president of Texas A&M, with a $925,000 annual salary over the next five years. Banks ended up negotiating her salary down $350,000 less than she was initially offered due to the current economic situation brought by the pandemic.

“If she can do for the rest of the university what she did for engineering, it’s gonna be a hell of a show to watch” said System Chancellor John Sharp, who said he had tried to convince Banks to apply for president six years ago, but she wasn’t ready to leave the engineering school. “She’s a visionary and an executor…[but] at the core of it all, it’s giving opportunities to the students that are here. I think that’s what makes her tick.”

While Texas A&M leaders said Banks has the track record of a proven leader, in an interview with The Texas Tribune, Banks tread so cautiously she was reluctant to even outline her vision for the broader university or discuss goals she has as president.

She declined to weigh in on heated issues that she will certainly have to address in the coming year, like the debate over the Lawrence Sullivan Ross statue. She even stopped short of definitively choosing her favorite piece of art in the Zachry building during a tour.

“I believe it would be presumptive to outline a vision without first meeting with and listening to the many constituents and stakeholders about their challenges, opportunities and ideas,” Banks wrote in response to follow up questions.

Banks said she plans to embark on a listening tour across campus before making concrete plans or setting goals. She admits she has a learning curve ahead when it comes to running other aspects of campus, including student affairs and athletics.

But Banks is clear that she wants the fall semester at Texas A&M to be something of a return to pre-pandemic life.

“We’re hopeful we will have a full [football] stadium … we don’t have to walk around with masks, we’re hopeful we don’t have social distancing,” Banks said “If we have an emergency situation, we will adjust to that. But right now, and perhaps this is the Aggie optimism, we are planning for a fully operational campus in normal mode.”

Banks said students learn best in the classroom interacting with faculty and other students.

“Without that, they may not…retain the information that we need them to be graduates of this institution,” she said.

But she cautioned it won’t be simply returning to college life as it was in 2019. She anticipates much of the fall will include rebuilding communities — social circles, faculty meetings, student organizations — that waned because they were difficult to maintain remotely.

Banks’ push for a totally in-person fall semester has the support of many students, but faculty are more cautious.

John Stallone, chair of the faculty senate, said while faculty understand the push to return to in-person classes, there is a concern that teaching in person will become a mandate.

“If we have another surge over the summer in COVID, then that’s going to raise some concerns and some worries amongst faculty,” Stallone said. “I hope that the flexibility that we’ve had so far will remain as she takes over.”

Banks said she anticipates the future of higher education will include some kind of hybrid learning, with both remote and in-person instruction. Stallone cautions that often means extra work for faculty.

“You can’t just use your in-person lecture online,” he said. “It’s not just a direct transfer, or an easy transfer in that regard. So you have to do things a little bit differently in order for it to work well, simultaneously.”

Eric Mendoza, a junior who is student body president at Texas A&M, said he thinks a normal fall is also contingent on students getting vaccinated and he’s interested in seeing how the new leadership handles that ahead of the fall semester.

“I think the trickiest part … is trying to convince our student body to want to get vaccinated,” Mendoza said, not because all students are hesitant to get the vaccine, but because they may be less concerned with getting seriously ill or not prioritizing finding an appointment.

Banks said she encourages everyone who can to get the vaccine, but declined to share an opinion of whether she believes vaccines should be required.

Recently, St. Edward’s University, a small, private university in Austin, announced vaccines will be required for the fall semester. Elsewhere, Cornell University and Rutgers University are also among the few universities nationwide mandating the shots. This week, Gov. Greg Abbott said any publicly funded entity cannot require a vaccine for services, which would effectively prevent Texas A&M from mandating the vaccines.

Last summer, intense protests broke out on campus over the statue of Sul Ross, a former Texas A&M president and Confederate general.

Banks would not share her personal opinions on the issue, saying Sharp’s decision to keep the statue was final and she supported the initiatives established to improve diversity among students and faculty. A task force was set up to provide recommendations to the university’s Academic Plaza, where the Ross statue is located, and tell “the full story of the university’s history.”

Asked about the university’s plans for diversity outreach, Banks said Texas A&M has done a good job of recruiting Hispanic students, but recognized the Black student population remained low. It currently hovers around 3%, though Black people are 12% of Texas’ overall population.

She stressed the university has a plan to address these disparities, pointing to the initiatives approved by the Board of Regents earlier this year which includes nearly $25 million dollars for additional scholarships to recruit more students of color and increased efforts to hire more faculty of color.

While Banks has increased student enrollment within the engineering school, it has not grown equally across all demographics. Black students still make up around 2.5% of all engineering students in fall 2020, compared to 2.7% in 2011 before she took over. She has overseen growth in Asian and Hispanic students which make up 13% and 22% of the college’s population today.

Banks said recruiting Black students in engineering is a national challenge and educators need to start introducing students to a possible future in engineering early. She pointed to multiple programs she has launched to introduce K-12 students to engineering, curriculum help for science and math K-12 teachers, and additional programs for current Texas A&M students, including a summer bridge program to help underprepared students get up to speed.

Banks came to Texas A&M from Purdue University, where she headed the civil engineering school, and was a professor at Kansas State University before that.

She describes herself as a persistent leader who isn’t afraid to fail.

“I tell the students that often certainly you have to have a basic skill set, you have to work hard, but you have to be persistent,” she said. “So if you fail, then stand back up, dust yourself off and start again, figure out why you haven’t done well and adjust. So I tend to have that characteristic. … And if I want to do something, I’ll do it.”

Indeed, many of the biggest wins and highest profile initiatives over the past few years at Texas A&M have Banks’ fingerprints on them.

She also oversaw the partnership with the Army Futures Command which has made the university’s RELLIS campus its hub for military research and new technology testing as it modernizes the Army, including cutting-edge research in hypersonics and autonomous vehicles.

As dean, Banks set a goal of enrolling 25,000 engineering students by 2025, ignoring skeptics who argued such an aggressive expansion would water down the program’s quality. The school is currently on track to meet that target and the program’s prestige is on the rise.

Just last week, U.S. News and World Report ranked the graduate engineering school 11th in the country and the best in the state for the first time, squeaking by the University of Texas at Austin.

She often refers back to her humble upbringing in Whitesburg, Kentucky as the place where she developed her values which have an emphasis on community and family. It’s also where she learned first hand how insurmountable it can be for young people to pick up and leave for a college education.

“We really didn’t talk about [college],” Banks remembered. ”It certainly wasn’t discussed in high school. … We didn’t really talk about moving away, we did not talk about, ‘What do you want to do when you grow up?’”

When she did pack up for Gainesville, Florida, where she earned her bachelor’s degree from the University of Florida, her grandfather — whom she deeply respected and had a close relationship — was angry that she would leave.

Banks’ father graduated college, but she said the experience of disappointing her grandfather gave her perspective on how many first generation college students struggle with the prospect of leaving home.

It’s one reason why she set up engineering academies across the state where students are accepted to Texas A&M, but take their first two years at one of six partner community colleges. The students are taught by engineering professors at Texas A&M who Banks sends to the local colleges.

“Leaving an area that could be impoverished or a family [where a] student is a first-generation college student is quite daunting to think of, leaving their hometown, their surrounding area, their supportive community,” Banks said. “But if they have one or two years of community college, they develop a cohort [of students] and that cohort comes here together.”