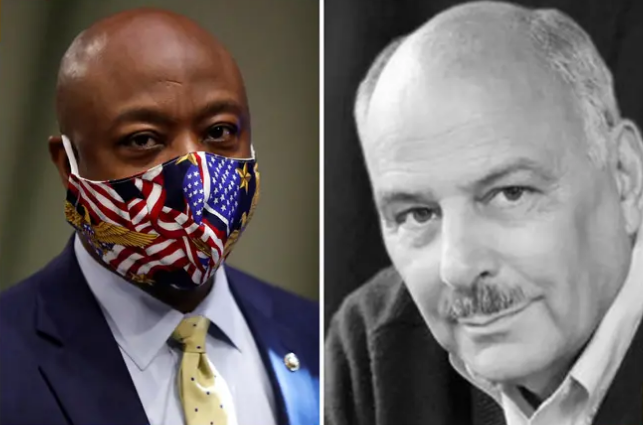 The Lamar County Democratic Party is not accepting the resignation of its chair after he reportedly used the slur “oreo” to describe U.S. Sen. Tim Scott, who is Black, in a now-deleted Facebook post, according to a statement provided to The Texas Tribune.

“Lamar County Democrats recommit ourselves to conduct our private conversations and our public social media discussions with anti-racist, pro-reconciling attitudes and language,” the party wrote in a statement. “We strongly condemn bigotry of any kind and will continue our historic efforts to work for justice and equality for all our fellow citizens.”

In a letter to Scott, a South Carolina Republican, O’Connor apologized for using the term, which refers to a “Black person who adopts the characteristic mentality and behavior of white middle-class society,” according to Merriam-Webster. In a previous statement provided to the Washington Examiner, he said he had embarrassed himself and his party and offered his resignation from the Lamar County Democratic Party.

“To Sen. Tim Scott, the residents of Lamar County, especially our Black residents, and to my family and friends, I profoundly apologize for the racially insensitive remark I made towards Sen. Scott last week,” O’Connor said in a statement provided to the Tribune. “I was wrong and I apologize.”

O’Connor used the term on Facebook after Scott gave the official Republican response to President Joe Biden’s address to Congress on Thursday, according to various media reports. During the rebuttal, Scott, the only Black Republican U.S. Senator, said that “America is not a racist country” and said that he has been called “Uncle Tom” and racial obscenities by Democrats.

The speech prompted outcry from many Democrats and people of color, many of whom noted that Republicans in many state legislatures — including Texas — are pushing measures that would add new restrictions on voting that would disproportionately affect people of color.

Multiple Republican politicians in Texas, including Gov. Greg Abbott and state GOP Chair Allen West, condemned O’Connor’s use of the phrase before he announced his intent to resign.

“This is disgusting, hateful, and completely unacceptable. O’Connor must apologize to step down immediately.” Abbott wrote in a tweet Saturday. censure him.”

In a video posted on Twitter Tuesday shortly before O’Connor announced his intent to resign, West said he was “sick and tired of the duplicitous hypocrisy of the true party of racism.” He said he would be sending a box of Oreos to the Texas Democratic Party.

“Until this guy resigns, I am going to stand up and speak out against the party of systemic racism,” West said. “The party of the soft bigotry of low expectations.”

Local Republican Party chairs in Texas have faced their own condemnation in recent months over social media reports. In June, Abbott and Republican party leaders condemned five GOP chairs after they posted conspiracy theories on Facebook, including a suggestion that George Floyd’s death was staged to erode Black support for President Donald Trump.

Former Harris County GOP chair Keith Nielsen, who posted a Facebook graphic juxtaposing a Martin Luther King Jr. quote with a banana, was the only one of the five to resign, and he did not resign until nearly six months after the posts were reported on by the Tribune.

In the same month, the Tribune also reported on seven other similar posts by GOP chairs, including posts suggesting people protesting Floyd’s death were being paid by Jewish billionaire George Soros. But many GOP officials who criticized the previous social media posts did not immediately comment on those posts or call for the resignation of the officials who posted them.