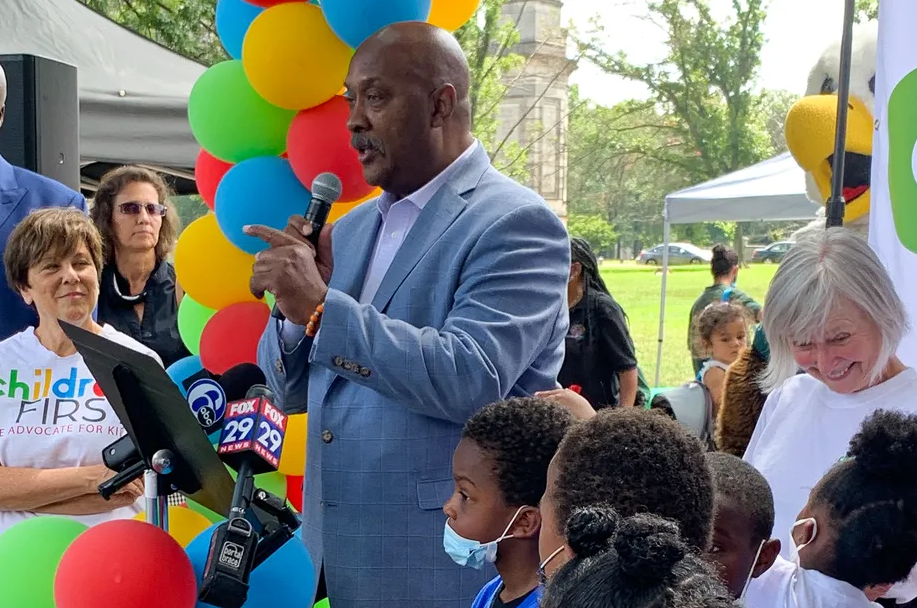 By Dale Mezzacappa .Chalkbeat on August 9, 2021

The group formally announced the change Thursday at a festive picnic near the Please Touch Museum in Fairmount Park. Children played and angled to get in camera range as they listened to speeches from Ed Rendell, former Pennsylvania governor and Philadelphia mayor, and U.S. Rep. Dwight Evans, among others.

“What more appropriate message could it be than Children First,” said Evans, a former state legislator who represents Pennsylvania’s 3rd Congressional District. “This is not a Democratic, not a Republican issue.” Assuring the well-being of the generations that follow is “the basis of democracy,” he said.

Donna Cooper, the group’s executive director, said in a briefing that it is working to double its budget from $2.5 to $5 million and expand its staff and focus. It is planning new initiatives including a Parent Advocacy Institute to train parents to argue more effectively for children’s needs. It also will intensify its work with youth organizers and is building an Equity Collaborative in 14 suburban school districts to assure that students of color have equal access to advanced courses and other opportunities.

Cooper was state policy director for Rendell when he was governor.

The group, founded in 1980 as Philadelphia Citizens for Children and Youth, changed its name to Public Citizens for Children and Youth in 2007 as it expanded its focus beyond the city to the surrounding suburban counties and became more influential at the state level. Besides its advocacy, the organization has also run mobile eye clinics for children in partnership with local hospitals, created the “Picasso Project” through which schools can apply for small grants for arts programs, and recently hired an expert in behavioral health, among other initiatives.

The group decided to announce its new name on the anniversary of the adoption of the Children’s Health Insurance Program, or CHIP, a federal program enacted in the Clinton administration that has given 10 million mostly low-income children improved access to health care. Pennsylvania’s legislation, enacted with PCCY’s advocacy, served as a model for the federal program.

Annette Myarick, executive director of the Pennsylvania chapter of the American Academy of Pediatrics, said that this is a crucial time to focus on the needs of children, whose lives were profoundly affected by school shutdowns and other difficulties brought on by the pandemic.

“They suffered the loss of school, as well as after-school programs, sports, theater and arts,” she said. “They suffered social isolation,” enduring a “heavy burden” in their young lives. “They need safe places to build resiliency,” she said, and strong voices “to speak up for the protection of children.”

Among those in attendance was Shelly Yanoff, who served as PCCY’s executive director for 18 years. “If we take care of kids,” she said in an interview, “everything good will follow.”