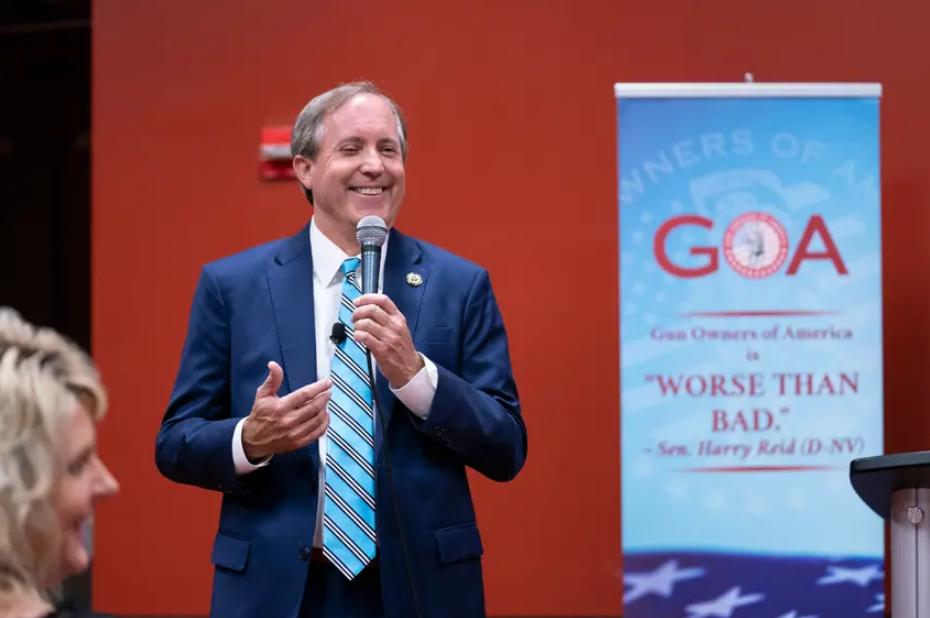 Prosecutors in the felony fraud case against Attorney General Ken Paxton are asking the full 1st Court of Appeals to review a decision by a three-justice panel last month that moved the trial from Harris County back to Collin County, where Paxton lives, potentially adding another delay to a case that is nearly 6 years old.

In May, a panel of three Democratic justices in the 1st Court of Appeals in Houston allowed the case to return to Collin County on a vote of 2-1, ruling that the presiding judge who moved the case out of Collin County in March 2017 had no longer been assigned to the judicial region handling Paxton’s case. The ruling was a major victory for Paxton, who had asked the courts to be tried in his home county, a staunchly Republican area of the state where he and his wife, state Sen. Angela Paxton, R-McKinney, are major political figures.

Prosecutors in the suit claim Ken Paxton persuaded investors to buy stock in a technology firm without disclosing he would be compensated for it. He was a member of the Texas House at the time. Paxton denies any wrongdoing and says the accusations are politically motivated.

In a court filing Tuesday, prosecutor Brian Wice accused Paxton’s legal team of “sandbagging” the courts by withholding information about the judge’s expired assignment so they could later raise the issue in an attempt to move the case back to Collin County.

Gallagher continued as the presiding judge after that date and issued his ruling to move the case out of Collin County in March 2017. That May, Paxton’s legal team asked an administrative court to block Gallagher’s ruling and remove him from the case because his temporary assignment had expired at the beginning of the year.

In his Tuesday request, Wice argued that Paxton’s team failed to bring up Gallagher’s expired term until after the change-of-venue ruling did not go in their favor, and asked the full 1st Court of Appeals to stay the three-justice panel’s decision until the full nine-justice court could review the ruling. Wice threw doubt on the idea that Paxton’s team came upon Gallagher’s expired temporary assignment only “by happenstance” and said the burden was on the attorney general’s defense team to show when it learned of the judge’s expired term.

The majority opinion had already rejected that argument, ruling that “nothing in the record shows a lack of reasonable diligence in bringing the challenge.” But Justice Gordon Goodman, who dissented in part, noted in his opinion that the court had no evidence as to “how or when Paxton’s counsel discovered that Gallagher’s assignment had expired.”

Wice argued that while a review of a panel decision by a full appeals court is usually not favored, it is the right move in this instance.

The three-justice panel deliberated for nearly seven months on a Harris County district judge’s decision to move the case back to Collin County. An additional review by the full court could prolong a case that’s nearly 6 years old.

Paxton’s defense team celebrated the panel’s ruling last month, saying it was time to get the case back on track and for their client to have his day in court. They did not immediately respond to a request for comment for this story.

It’s unclear whether the case will be resolved before next year’s election, when Paxton will be seeking a third term as attorney general. He has served most of his two terms under indictment on the fraud case and will face his biggest challenge yet in a Republican primary that now includes Texas Land Commissioner George P. Bush, who has made Paxton’s legal troubles a centerpiece of his campaign.

Paxton is also reportedly being investigated by the FBI over accusations last year from former employees who say he abused his political power and accepted bribes. He denies those allegations. Four former aides have filed a whistleblower lawsuit arguing Paxton fired them as retaliation for reporting his alleged behavior to federal and state law enforcement agencies.

Paxton’s troubles continued to mount on Wednesday when the Associated Press reported he was under investigation by the state bar for professional misconduct. The investigation stems from Paxton’s failed efforts to overturn the results of the 2020 presidential elections in Georgia, Wisconsin, Michigan and Pennsylvania, which gave President Joe Biden the electoral victory over former president Donald Trump. The U.S. Supreme Court threw out the case.

The State Bar of Texas initially declined to take up the complaint by a Democratic Party activist that Paxton’s filing of the suit was frivolous and unethical. But the Texas Board of Disciplinary Appeals granted an appeal and ordered the state bar to investigate the complaint.

Kevin Moran, the 71-year-old president of the Galveston Island Democrats who filed the grievance, said he filed the complaint because he thought the election lawsuit was frivolous and Paxton continued his efforts even after legal experts shot down its merits.

Paxton now has less than a month to respond to Moran’s complaint. After that, state bar investigators will take up the case, which could take months to resolve.

Bush, Paxton’s biggest rival for re-election so far, has criticized Paxton’s handling of the lawsuit challenging election results in battleground states, namely his decision to take it to the Supreme Court after the election. Bush has suggested Paxton should have challenged election laws in the battleground states prior to the election, calling the lawsuit “a little too little too late.”

“It was a Hail Mary pass that every lawyer in the Texas bar and the country knows would not have succeeded, but he followed it anyway,” Bush told reporters after launching his Paxton challenge last week in Austin. “I get what he was trying to do, but it didn’t have a chance in hell of getting an audience at the Supreme Court.”