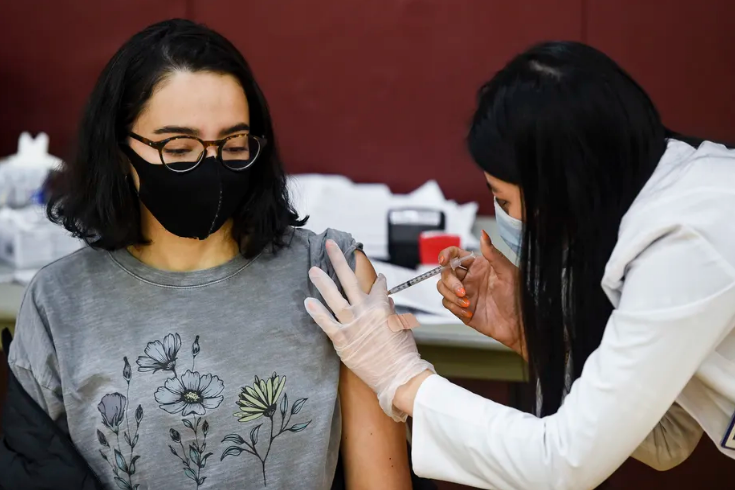 Kids as young as 12 can now get vaccinated. Will NYC public schools help get shots into arms?

Now that children as young as age 12 are eligible for Pfizer’s coronavirus vaccine, the next step is getting their families to sign them up for it.

While Shake Shack is trying to lure New Yorkers with a free side of French fries, and the Mets and Yankees are offering free ballgame tickets, one group in the Bronx is giving shots at a Bronx charter school and is paying vaccine recipients $50 per dose. A Brooklyn private school, meanwhile, brought the vaccine to their high school campus last month. The city’s education department has not yet disclosed what role it will play in vaccinating students. Still, Health Commissioner Dr. Dave Chokshi this week suggested the nation’s largest school system will be involved in administering the vaccine.

“We’re also actively working with community pediatricians and the Department of Education, who will be critical to both administering the vaccine as well as communicating with parents and guardians about its safety,” Chokshi told reporters during the mayor’s press conference on Wednesday.

Education department officials declined to comment further. Both Chokshi and Mayor Bill de Blasio have encouraged families to sign their children up for appointments, though people can also walk into some city-run sites.

Vaccinating children is a big piece of the school reopening puzzle, as New York City parents and school leaders await key details about what classrooms will look like in the fall. It’s especially important as de Blasio has insisted on opening schools five days a week to all students, as he has waffled on whether a remote option will also be available. The vaccination rate could quell some safety fears among the more than 60% of students now learning virtually full time.

At the same time, some parents, even those who have been vaccinated themselves, are hesitant about their children getting jabbed because of concerns over allergies and their development. Clinical trials have found the vaccine to be 100% effective and safe among children.

There is precedent for inoculating students on campus. In 1947, in the fight against smallpox, New York City vaccinated roughly 889,000 students in schools within just one month. There are also some efforts underway to bring the coronavirus vaccine to campuses.

On Monday, Bronx Rising, a nonprofit that has hosted more than a dozen vaccine pop-ups throughout the borough, will host its first at a school.

The organization — which is partnering with Morris Heights Health Center — will offer the Pfizer vaccine to students, teachers, and staff at the Mott Haven Academy Charter School, as well as others in the surrounding community.

In another first, they will offer $50 in prepaid VISA gift cards for each dose to anyone who gets vaccinated at the school pop-up event, said Jason Autar, chief operating officer for Bronx Rising. The parent coordinator at the school, which serves elementary and middle school students, is devising a list of people in the community who are interested in getting shots and has also informed a neighboring public school of the event, he said.

“We’re really trying to target younger folks because we’re seeing there is hesitation for whatever reason, so we want to meet kids where they’re at,” Autar said. “We think partnering with community institutions such as schools is the next way to inoculate as many people as possible.”

The school is located in the 10454 ZIP code, part of the nation’s poorest congressional district. There, just 45% of all adults — who have been eligible since April 6 —have received at least one dose, compared to 49% across the Bronx and 57% citywide, according to the most recent city data available. Autar said one reason the organization approached this particular charter school was its focus on providing extra services to students in foster care.

“For us, with access points opening up, it’s important for us to try to find more vulnerable folks,” Autar said.

The organization, which has averaged about 150 people at their pop-ups, is open to partnering with more schools that show interest, Autar added.

On the other side of the economic spectrum, officials at Brooklyn’s Poly Prep Country Day School, a private school where tuition is nearly $54,000 a year, brought a vaccine clinic last month to the school’s upper campus in Dyker Heights to administer the first dose to those ages 16 and up. (Until the U.S. Food and Drug Administration approved the emergency use of the Pfizer vaccine for children 12 and up on May 10, only older teens were eligible to get the jab.)

The school vaccinated more than 30 teens, representing about 10% of its eligible students at the time, Poly officials said.

“Offering the vaccine right here at Poly helps overcome the barriers that some of our kids face, such as a parent needing to take a day off from work to visit a clinic,” said Sarah Zuercher, a nurse practitioner and Poly’s director of health and well-being. “We hope to be a part of a growing school-based vaccine effort that will make schools safer and can also play an important role in the New York CIty’s ground game effort to get every eligible person vaccinated.”

Though the state plans to require vaccines for college students returning this fall to the State University of New York and City University of New York schools — once the shots are fully approved by the FDA — the city has no such plans for younger students. Mayor Bill de Blasio said this week that he would not require vaccinations for students or staff to return to traditional public schools.

The vaccine could be available to children as young as age 2 by September.

This article was originally posted on Kids as young as 12 can now get vaccinated. Will NYC public schools help get shots into arms?