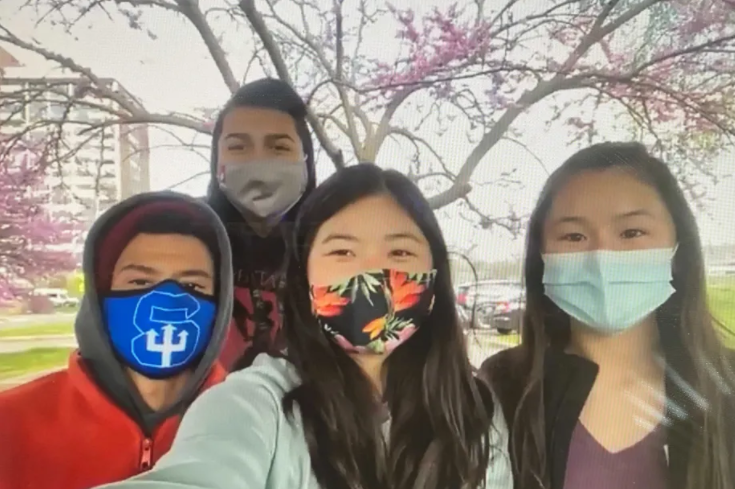 By Aaricka Washington .Chalkbeat on April 30, 2021

Cece Goff, a senior at Shortridge High, recalls that after a gunman killed eight people — six of them Asian women — at Atlanta spas last month, only one of her teachers acknowledged the tragedy. That teacher was a Taiwanese American.

“Besides our Chinese teacher, radio silence,” said Goff, who is Chinese American. “I was just disappointed.” She said no one else at her school took any action.

After the Indianapolis Public Schools board issued a resolution denouncing hate, including against Asian Americans, Goff and three other Shortridge students mobilized their chapter of the National Chinese Honor Society to press for more than lip service. They issued a declaration to the school board.

The students’ protest already has led to promises of change.

They met with Superintendent Aleesia Johnson, board member Kenneth Allen, and Shortridge administrators.

They’ve scored some victories and feel district leaders have heard and acknowledged their concerns — although little of substance has changed so far. Asian American students make up less than 1% of Indianapolis Public Schools, but the students believe it’s critical that the district address anti-Asian hate, include Asian Americans in policy making, and incorporate Asian Americans and Pacific Islanders into the curriculum.

Stop AAPI Hate, a San Francisco-based hate crime reporting initiative, compiled nearly 3,800 incidents nationwide through February, over roughly a year of the pandemic. Children and teenagers 17 and under have reported 13% of the incidents.

Members of the Shortridge chapter of the National Chinese Honor Society — a scholastic and civic organization of students who have taken high school Mandarin classes — are demanding principals and school staff address topics like the “model minority myth,” economic inequities, and the lack of mental health resources serving Asian American and Pacific Islander communities. The students called on the district to convene conversations about the issues that affect them and to hire more faculty and administrators of Asian descent.

Students said they wanted to learn about the Chinese Exclusion Act of 1882, the Japanese internment camps during World War II, and Vincent Chin, a Chinese American man who was beaten and killed in Detroit by two white men in 1982.

Roman Moreno, the president of the Shortridge group, said that all he remembers learning about Asian history is the rise of China under Mao Zedong. And that’s not related to Asian Americans.

“IB is a Eurocentric curriculum,” said Moreno, who studies Mandarin and is Mexican American. “The perspective that you get in there is going to be a whole lot different than a curriculum that is somewhat based in America.”

The students’ list of specific demands contrasts with the school board’s one-page resolution condemning acts of hate against Asian Americans, which the students said pales in comparison to the board’s four-page Black Lives Matter resolution that included specific steps like restructuring the police department and prioritizing recruiting Black educators.

The board’s Asian American resolution “just felt lackluster and that one race was more important than the other,” said Ziv Zellars, who is Black and is the student group’s vice president.

Shortridge Principal Dennis Thomas said that every year ninth graders explore Asian American issues in a “Hidden Histories” project. After meeting with student advocates, he said he would talk with teachers about adding the Asian American civil rights movement to the history curriculum.

“It’s always good to aspire and to continue to grow and to get a little bit better,” Thomas said. “This is a great lesson for us to look at our historical analysis.”

Sarah Park Dahlen, an associate professor at St. Catherine University in St. Paul, Minnesota, who researches diversity in children’s literature, said schools should audit teaching materials to analyze how Asian Americans and Pacific Islanders show up in the curriculum. She said curriculums should dive into the complex global relationships between Asian countries and the United States, and how U.S. involvement in wars in countries like Korea and Vietnam drove people to immigrate.

Dahlen also said that ideally teaching about Asian Americans should be comprehensive and nuanced, and should examine the communities’ relations to other groups of color.

Even before the Atlanta and Indianapolis mass shootings that killed people of Asian descent, Asian Americans and allies nationwide have been calling for ethnic studies, anti-bullying training, and more representation in schools. The attacks provided a sense of urgency.

For example, in California, the state board adopted an ethnic studies model curriculum in March. In Illinois, the legislature is considering a bill that would mandate teaching Asian-American history in elementary and high school beginning in the 2022-23 school year.

Dahlen noted that student activism for ethnic studies traces back to the 1960s with college students of color.

The Shortridge students who have lobbied for change feel glad that they’ve been heard, but they’re uncertain about the district making progress. All four of the group’s leaders graduate this spring.

“So we just have to keep pushing,” Zellars said. “Hopefully, we’ll come back and visit and see the change.”

They believe having more robust, comprehensive Asian American and Pacific Islander representation at their school and district benefits everyone.