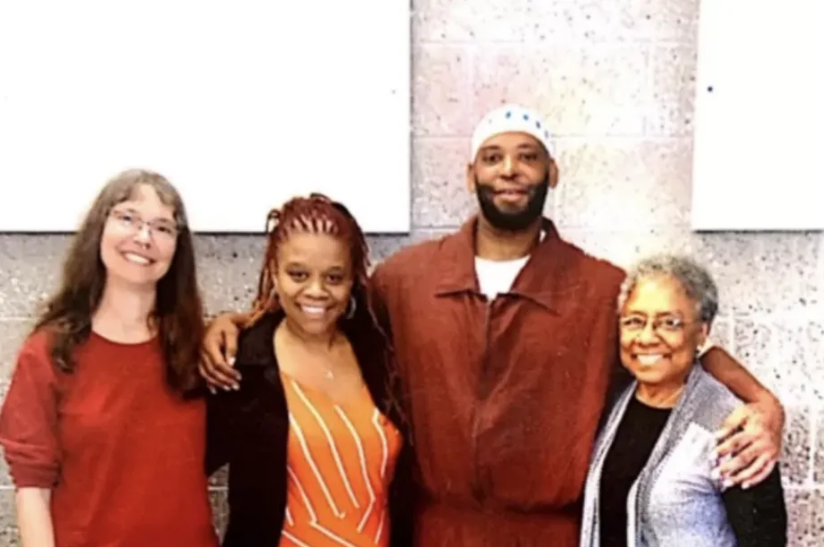 Calls coming out of SCI Phoenix, a maximum-security prison in Montgomery County, can last only 13 minutes, and are interrupted every four by this voice recording.

Carter paused, waited for the recording to finish, and continued. “If one of those lab kits can change a child’s life or pique their interest enough in science to have them do something other than come to prison, I think that’s a win,” he said.

Carter is one of 18 men incarcerated at SCI Phoenix who recently pooled together $1,450 to buy at least two science lab kits for students at Stephen Girard Elementary School in South Philadelphia.

The men make between 19 and 51 cents an hour working a range of jobs — some in the prison infirmary, the library, or food service; two of them work for the Mural Arts program. At those wages, that means it took the men thousands of working hours combined to come up with the cash.

Though some borrowed from their families as well, contributing that much money is a sacrifice. Typically, they use it to buy personal hygiene items, food, phone cards, clothing, and other items from the prison’s commissary.

“The funny thing is, is the fact that it would be news,” said Carter, “how the perceptions of men in prison … as if we’re not human beings enough to care about children. I think we’re doing what we’re supposed to do.”

Carter, who is 52 and has been incarcerated for 30 years, finds he is unjustly defined by the mistakes he made when he was 22. Inside, he said, it can be hard to find ways to reach out and make a difference in his home city, so he jumped at the unique opportunity to help children in Philadelphia.

Tyree Wallace, who is also incarcerated at SCI Phoenix, learned that Girard Elementary didn’t have science supplies from his sister in Philadelphia, who told him about a DonorsChoose request made by first-grade teacher Monty Yellock.

Wallace said he took it personally when he found out the students needed supplies.

“I felt it,” he said. “It was visceral, and I wanted to do something about it.”

Wallace then gathered his friends in the prison to get the money together, helping to fill one of many gaps experienced by many teachers and students in schools across Philadelphia.

The aid comes as Pennsylvania’s public school funding system is on trial as part of an ongoing lawsuit, with petitioners arguing that the funding system violates the state constitution. Educators at the school and the incarcerated men at SCI Phoenix point to Girard as just one example of why the state needs a more equitable funding model.

The power of ‘active learning’

DonorsChoose is a popular site for teachers to request money for school supplies. Throughout the nation, teachers rely on crowdsourcing for supplies. The School District of Philadelphia even offers an optional professional development course on how to write a request on DonorsChoose.

Yellock used the site so she could buy the School District of Philadelphia’s new science lab kits, FOSS kits, for all three first-grade classes to share.

Without these kits, most science classes at Girard Elementary don’t have materials for experiments. For the majority of lessons, students watch videos or read articles about science, instead of conducting science experiments themselves, Yellock said.

Girard has not been able to afford the FOSS kits since 2018, when enrollment started to drop after two charter schools opened nearby, according to principal Leah Coleman.

All the students at Girard are considered economically disadvantaged; 62% of students are African American, 17% are Asian, and 9% are Latino.

When enrollment dropped, so did the school’s funding from the district, and it lost a specialist teacher dedicated to science. The science room became the art room, and teaching science became the responsibility of each general education teacher.

Under the school district’s direction, Girard started focusing more on English, math, and social and emotional learning. Teachers said they now have less time for science and social studies.

Coleman said the school is grateful to the men at SCI Phoenix, but added that, ideally, every school would have the necessary funding to get new supplies each year and every kind of specialist teacher — one for gym, art, computers, music, and science.

“It is an unfortunate circumstance,” said Coleman. “This speaks to the need for more equitable funding in education to ensure that all children have access to what they need.”

Many teachers at Girard feel overwhelmed without the right teaching tools, Yellock said, and students might not even know “that what they’re learning is science sometimes. I think they just think it’s another reading lesson.”

Yellock said learning science without hands-on experimentation is like reading recipes and never getting in the kitchen to cook.

For example, the most recent topic the class covered was sound. The entire first grade shared one tuning fork for lessons. In another lesson about light, Yellock found flashlights for students to explore shadows, make light bend, and identify opaque, transparent, and translucent objects.

Many of her students are motivated by the hands-on learning experiences they get, and beg to do science experiments every day, Yellock said. During other kinds of lessons, like math, she notices some students shut down in frustration or zone out if they can’t solve a problem.

But during hands-on activities, students explore together and collaborate, which is especially important for their first year of in-person learning. She said she often sees her students huddling together, yelling findings to one another — “‘Come here! Come here! Look at this! You have to see this!’”

“We want them to see themselves as scientists,” said Yellock. “And those kits really help with that.”