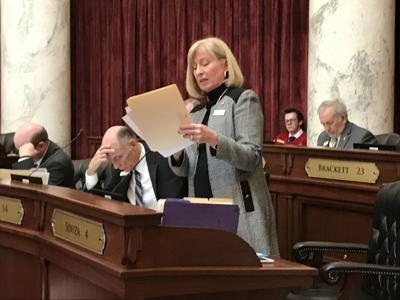 Two years after a group of conservative Democrats, along with  Republicans voted against  decriminalizing abortion care, the state Senate passed SB 10 Thursday, 25 to 17.

SB 10, sponsored by state Sen. Linda Lopez, D-Albuquerque, is called the Respect New Mexico Women and Families Act and has a mirror bill, HB 7, sponsored by Rep. Micaela Lara Cadena, D-Mesilla. The two bills remove three sections from the criminal code which, in 1969, banned abortion with some limited exceptions.

The law has repeatedly been called archaic and advocates for its repeal said it included language contrary to how medicine is currently practiced. While the law is currently unenforceable, reproductive rights advocates have said that given the conservative bloc on the U.S. Supreme Court, Roe v. Wade could be gutted in the next few years.

During this Legislative session, only two Democrats, state Senators Pete Campos, D-Las Vegas, and George Muñoz, D-Gallup, voted with Republicans. Campos and Muñoz are the only two of the original eight Democrats who helped Republicans defeat the bill in 2019 who kept their seats during the 2020 election. Five of the original eight, almost all of whom were powerful state Senators who had been representing their districts for years, lost their primary bid. One state Senator died while still in office.

Republicans acknowledged during the floor debate that they didn’t have enough votes this year to stop SB 10. They  repeatedly appealed to Democrats, asking them to compromise. Several Republicans offered two amendments and two bill substitutions in an effort to alter the bill. Democratic and Republican Senators alike sniped at each other throughout the debate. State Sen. Crystal Diamond, R-Elephant Butte, said even though she ran as an anti-abortion candidate, she she was still willing to bring a bill substitute to the Senate floor that would decriminalize abortion care, but only up to 20 weeks.

But Senate Democrats held firm and defeated each attempt to alter the bill. Laws that limit abortion are routinely referred to as TRAP (Targeted Regulation of Abortion Providers) Laws, which reproductive rights organizations have said burden providers with no benefit for the patient.

State Sen. William Sharer, R-Farmington, brought a bill substitute that would make abortion legal up to 35 weeks but after largely Republican-dominated debate, withdrew that substitution.

State Sen. Peter Wirth, D-Santa Fe, who is a co-sponsor of the bill, rose in opposition to the refusal clause amendment. During the 2019 Legislative session, the Senate Judiciary Committee amended the bill to allow the refusal section to remain.

“I voted for the amendment two years ago and you all voted against (the bill.) I didn’t agree it was the right thing to do. I was trying to compromise. As a result, this issue has been front and center for two years and voters spoke loud and clear (during the 2020 election) and this bill today will put an end to all three sections to this old law,” Wirth said.

The refusal clause was much debated during committee hearings this year with impassioned speeches from providers during public comment that they would leave the state or their profession if the 1969 statutes are struck because they fear they will be forced to perform an abortion, despite laws and regulations that enable providers to refuse treatment if they are morally opposed to it.

“In a country where fiction is all too often treated as fact, you will have the conscience protections and we shouldn’t be doing scare tactics to folks,” Candelaria said.

Emotional testimony came from both sides of the aisle. State Sen. Katy Duhigg, a freshman Democrat from Albuquerque and a co-sponsor of the bill, said that she learned earlier this week that she may have cancer and may have to have a hysterectomy.

“I am terrified,” Duhigg said from the floor. “I am terrified for myself and for my 7-year old son….I am sharing this very personal information with you and sharing it with a lot of strangers I’ve never met who are watching online. I don’t want to be sharing with any of you right now, but I’m sharing this because no other woman should have to go before a group of strangers and talk about these intimate details.”

The 1969 statute required that for a woman to get an abortion in certain exceptions – rape or incest, her health or the health of the fetus – she would have to go before a hospital board to plead her case.

Two other freshman Democrats, state Sen. Carrie Hamblen, of Las Cruces, and Siah Correa Hemphill, of Silver City, also told personal stories as to why the passage of SB 10 is important. Hamblen said she had to come out to a health care provider on her college campus when she had strep throat.

“I said I was not on birth control and she strongly stressed I should consider birth control. Birth control medication is not necessarily needed for lesbians. I had to come out to this medical provider. It was 1993. It was uncomfortable and terrifying. There were not protections for me at various levels. The nurse practitioner was applying a one-size fits all for healthcare, and that’s not appropriate,” Hamblen said.

Correa Hemphill said she has raised four children, one of whom developed bone cancer at age 4. She said she has held his hand for many years and provided a loving home for her children.

“That is pro life. Keeping this outdated law on the books and keeping an enforceable law is not,” she said.

Another freshman Democrat, Brenda McKenna, D-Corrales, and Nambé, brought up the U.S. government’s forced sterilizations of Native American women in the 1970s.

Sharer said he is Catholic and he said that when he looked across the Senate floor “I see other Catholics.”

“We go to the same church. When we eliminate this 1969 law completely, we are saying our religion is irrelevant,” Sharer said.

But state Sen. Gerald Ortiz y Pino, D-Albuquerque, said he is also Catholic and that he was taught to examine his own moral conscience on issues.

“We are a pluralistic society and I will not force my views on you,” Ortiz y Pino said.

The bill now heads to the state House of Representatives.

Speaker of the House Brian Egolf, D-Santa Fe, told NM Political Report in a statement that he looks forward to moving the bill through the House.

“This year, the success of this legislation through a Senate chamber where two years ago it had failed is a direct result of New Mexico’s voters who demanded at the ballot box that all women should be allowed to make their own personal healthcare decisions,” Egolf wrote.

Egolf told reporters on Thursday that the House could vote on the bill as early as next week or the week after.

In addition to the 2019 bill, there were two other attempts to pass a bill that would decriminalize abortion, once in 2017 and again in 2018. Neither bill made it out of committee.

Gov. Michelle Lujan Grisham has made the Respect New Mexico Women and Families Act a priority. She issued the following statement after SB 10 passed the Senate:

“This is a simple bill. And it is powerful in its simplicity. It affirms a woman’s self-evident autonomy over her own body. And it ensures no health care provider in our state may be criminalized for providing health care. I thank and applaud the women senators who spoke in such personal terms in their supportive testimony today. This was a moment for common-sense leadership and I am grateful to the lawmakers and advocates who have met that moment.”