Home » Illinois to give child care workers $1,000 and cover costs for unemployed parents 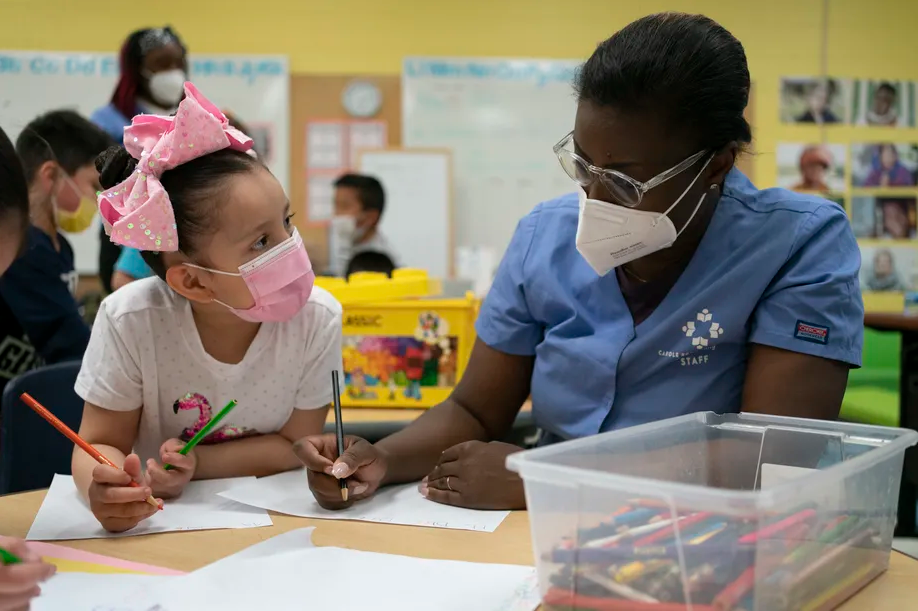 Illinois to give child care workers $1,000 and cover costs for unemployed parents

Illinois will give every eligible child care worker in the state a one-time $1,000 bonus in an effort to stem high turnover and ease a staffing crunch that has challenged the industry.

Gov. J.B. Pritzker announced the bonuses Monday as part of a broader package of child care recovery efforts, saying that the additional cash will help stabilize a field that is central to the state’s economic recovery from the COVID-19 pandemic.

Pritzker also said Monday that his administration will expand a child care subsidy program to cover three months of child care or after school care costs for children whose parents are unemployed and seeking work.

The child care subsidy program, which Pritzker has expanded in his tenure, previously only covered costs for about 93,400 children whose parents are working or attending school. To be eligible, families must have a household income within 200% of the federal poverty level; for a family of four in Illinois, that threshold is about $4,400 a month.

Parents are charged co-pays based on a sliding scale, and the state picks up the rest of the cost. In Illinois, according to the organization Child Care Aware, the average monthly price of full-time child care is $773 per child. Married couple households pay an average of 11% of their income on child care, while single parent households pay 29%.

This expansion would allow unemployed parents to qualify for a limited time while seeking work — and potentially extend benefits for a full 12 months depending on eligibility.

“When our youngest families succeed, our whole state reaps the benefits,” said Pritzker, who made the announcement at Christopher House in Chicago’s Belmont-Cragin neighborhood.

In Illinois, early education is a field marked by low pay and high turnover — a 2019 state staffing survey showed that a startling 32% of teachers in Illinois’ licensed centers leave their jobs every two years, roughly the same percentage as a similar study two years prior.

The state’s child care centers and family-run homes have struggled during the pandemic with declining enrollment and increasing budget pressures. Since the onset of the pandemic, Illinois has offered stabilization grants to more than 5,000 providers, helping stave off closures.

The money for the worker bonuses and the expansion of the subsidy will come from federal stimulus dollars, Pritzker said.

Through the bonus program, all staff at licensed and license-exempt child care centers and homes will be eligible to receive the $1,000 bonuses, provided the centers meet certain health and safety requirements. Child care workers will receive the payment through their employer between October 2021 and March 2022.

“Like every state, Illinois continues to experience challenges to our already fragile child care ecosystem,” said Pritzker. “Providers have seen declines in enrollment and administrators are battling tenuous budgets. But we’ve taken a different road than other states — and it has made a difference.”

In Illinois, the median hourly wage for a full-time teacher in an early childhood classroom is $13 an hour, or $27,040 a year, based on March 2020 data from across Illinois’ licensed child care facilities. Two-thirds of those teachers had at least an associate degree, and nearly half of them were women of color. Fewer than half were offered health insurance.

This article was originally posted on Illinois to give child care workers $1,000 and cover costs for unemployed parents