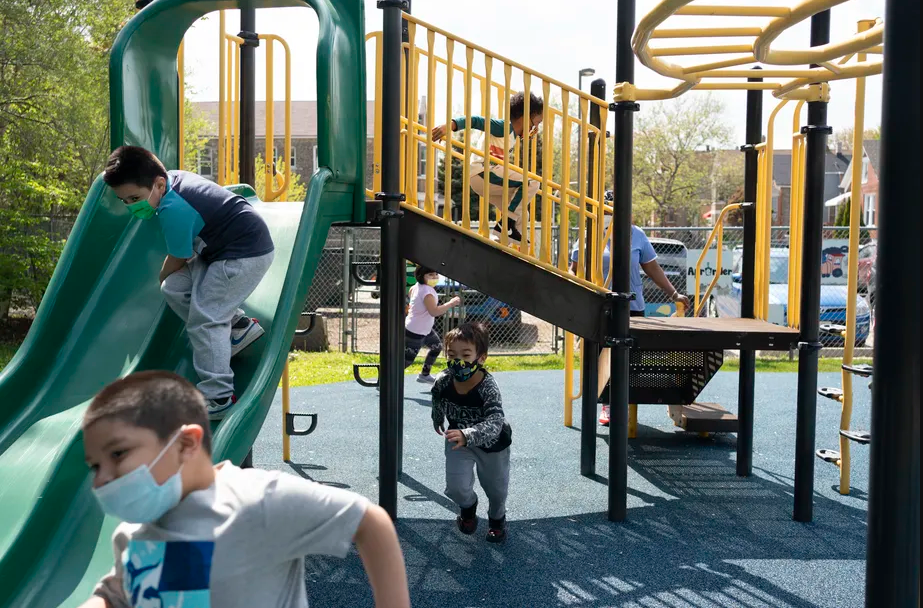 A state law that limits when children can be expelled from preschool programs has reduced formal expulsions, but emerging data show that programs still find other ways to exclude children under 5 for behavior issues.

A new report from the University of Illinois at Chicago also shows that boys, Black children, and youngsters with disabilities continue to be overrepresented among children who are formally expelled from programs in Illinois, as they are in national data.

Kate Zinsser, an associate psychology professor who led the study at the Social-Emotional Teaching and Learning Lab at UIC, said it was good news that an Illinois law enacted in 2018 has led to sharp decrease in formal expulsions, but that more research — and better data — is needed to address the number of behavior-related withdrawals that families make after meetings with administrators.

Pushing out families or urging them to transfer to other programs is a practice that researchers call soft transitioning, or counseling out.

“We know that inconsistency and change are especially difficult for young children, and yet the kids who need the most support get churned through two, three, four child care centers in a matter of a few years,” said Zinsser. “The disruption to them and their families is only further exacerbating children’s nascent abilities to regulate their emotions and behaviors. But it’s also costly and exhausting for teachers who have to start from scratch building relationships.”

Zinsser’s team found that when Illinois children were “transitioned” out of a program, one in five did not re-enroll elsewhere and instead just returned home under the care of a relative or neighbor.

“You think about the stress that families have been under and now a kid is sitting on the sidelines of preschool,” she said. “That means some children will enter kindergarten or first grade with no early learning experiences, or a very negative one.”

Preschool expulsions have become a subject of debate and a focus area of national research across the past decade: About 17,000 3- and 4-year-olds are expelled from programs across the United States each year, a staggering number that dwarfs K-12 expulsion rates. Nationally, Black children are 3.6 times more likely to be turned away from programs compared to white children, and boys are far more likely to be pushed out than girls.

Studies show that there are serious consequences to those youngsters beyond interrupting learning during critical development years. Children who’d been expelled from preschool were at greater risk for dropping out and involvement with the criminal justice system.

A 2016 study from the Yale Child Study Center identified signs of implicit bias when it comes to how preschool educators and administrators mete out discipline of Black preschoolers. Researchers there found that teachers “show a tendency to more closely observe black students, and especially boys, when challenging behaviors are expected.”

Subsequently, several states have passed laws that limit expulsions for children under 5. The Illinois law, which was enacted in 2018, is considered one of the most aggressive. It requires publicly-funded programs to exhaust every resource available to meet the behavioral needs of a child before expulsion. If a center cannot, providers must work with the family to identify and transition the child into an alternative care setting and document and provide data around the decision.

The law, however, has limitations, as Zinsser found in her previous research. Even a year after it went into effect, many center directors reported inaccurate information about the changes or didn’t know the law existed. Some data reporting requirements didn’t fully go into practice until this year.

As a result, data remains limited, though what’s available does show that overall expulsions are down, Zinsser said.

In a previous study, from the 2017-2018 school year, more than a third of Illinois centers reported expelling a young child in the previous year — a rate that was 12.61 children per every 1,000.

The subsequent school year, fewer children were formally expelled — only 2.72 per 1,000 children. However, Zinsser’s team gathered emerging data that, for the first time, show significant numbers of families withdraw children from programs after meetings with administrators over behavioral issues.

That data showed that, compared to formal expulsions, nearly twice as many children were withdrawn after such meetings and that about three of every 1,000 children enrolled transitioned to another program because of behavior. Those findings increased the number of overall children leaving programs for disciplinary reasons significantly.

And contrary to thoughts that a year of COVID-19 closures might taper the problem, Zinsser said the study identified an uptick in expulsions after child care centers abruptly closed in March 2020 under a state order and then reopened on an emergency basis.

That finding brought a fresh set of questions. Did children come back from the pandemic with greater behavioral issues? Did parents feel like they had fewer alternatives during the pandemic and resist efforts to be transitioned out? Did teachers and administrators feel more stressed and out of options, given the interruption to the typical special education and other consultation supports they rely on?

Zinsser, who previously studied the classroom impact of teacher stress, says researchers need better data to understand what’s happening. “Overall, the news in this report is good: Rates of expulsion are coming down,” she said.

But she added, if children must still leave programs because of how an adult perceives their behavior, it’s a sign that Illinois programs have a way to go to become more inclusive — and that more information should be disseminated on available supports, from mental health consultation to special education resources.