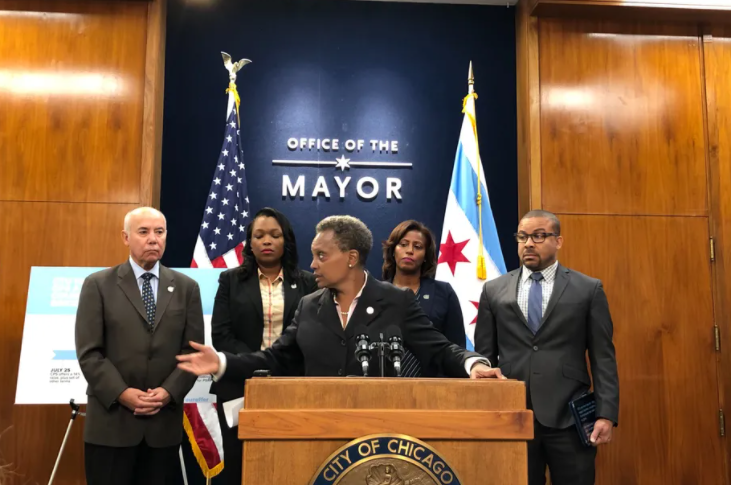 Mayor Lori Lightfoot found a carrier for her bill to create a partially-elected Chicago school board — a state senator who on Wednesday voted for a rival effort to mandate a fully elected board.

Sen. Kimberly Lightford said she will sponsor the mayor’s bill for a partly elected and partly appointed “hybrid” board.

On Wednesday, Lightford criticized a bill in the legislature to create a 21-person fully elected board, then promptly voted for the legislation.

Even while criticizing Martwick’s bill, Lightford voted to send the bill out of committee and to the Senate floor, where there will be another opportunity for the bill to undergo more debate.

“I’ve never opposed the bill that Senator Martwick is carrying and in fact, I’ll vote for it today,” she said.

A supporter of the elected board, Jitu Brown, board president of the Kenwood-Oakland Community Organization on the city’s South Side, spoke about the decades-long fight to get an elected school board after the city closed scores of schools.

“I have been a witness to literally dozens of mass mobilizations of parents frustrated because they did not have a voice. The inequity that was rooted in the struggling of their school was never addressed,” Brown said.

He said that the city’s parents and community members organized behind an elected school board because there is not an instrument to hold the current appointed school board accountable to families.

Sybil Madison, Chicago’s deputy mayor for education and human services, testified against the elected school board bill, citing progress that public schools have made since 1995, when the state gave the mayor control over the board.

She mentioned that any version of the board should include parents’ voices because they have often felt left out of board decisions.

After public testimony during the committee hearing, Lightford said that while she supported the idea of an elected school board, the Senate proposal for 21 members would be hard to implement. She raised concerns about the number of members, the cost of the board, finances for each race, and how to draw voting districts to ensure that all sides of the city are represented.

“I would like to make sure that moving forward on something as significant as the impact of 350,000 students and their families that we do all we can to make sure that we have the best outcome as legislators and that we present a law that can be implemented,” said Lightford.

Lightford has been instrumental in passing ambitious legislation. During the lame-duck session in fall, she pushed through a bill that created new graduation requirements for all Illinois students and more access to advanced courses.

As news reports began to surface about the mayor’s counterproposal Wednesday morning, leaders of the city’s teachers union — which has helped push Martwick’s school board bill and contributed to legislators sponsoring Senate and House proposals — made it clear they would not sign on to a compromise plan that involved mayoral appointees.

“We’re against a hybrid board. We want an elected school board,” said Union President Jesse Sharkey, speaking at a morning press conference about high school reopening and the union’s decision to call a work stoppage to protest the lack of a deal.

“Our cards have been on the table for a long time. We think democracy works in every school district in the state. It should work here.”

This article was originally posted on Hybrid or elected school board? Lightfoot proposal stirs debate in Springfield