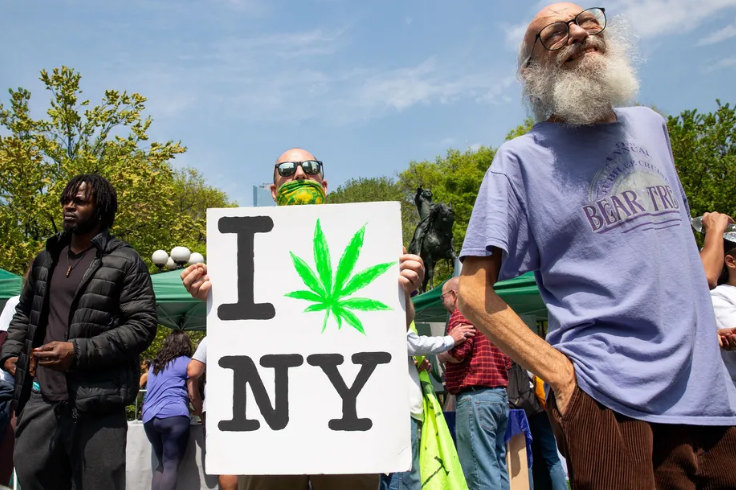 Gov. Andrew Cuomo on Wednesday signed a law legalizing recreational marijuana in New York — baking in an ambitious social justice plan to give populations targeted by never-ending drug wars a piece of the potentially lucrative action.

The historic law, the culmination of drawn-out, fierce negotiations in Albany, will allow people to possess up to three ounces of pot and grow a limited amount of cannabis at home. The measure also will expunge the convictions of people whose offenses wouldn’t have been crimes under the new law.

But the law’s centerpiece is a set of social equity provisions that should pour 40% of tax revenues from legal weed sales into communities long-devastated by over-policing and offer marijuana business opportunities to traditionally underrepresented groups.

New York, which became the 15th state to fully legalize recreational marijuana, hopes to succeed where some others have failed in bringing fairness to the industry — even as a new Office of Cannabis Management and a Cannabis Control Board carries a whiff of bureaucracy.

Here’s a guide to the law’s attempt at equity:

Who Qualifies as a ‘Social Equity Applicant’?

The Marijuana Regulation and Taxation Act (MRTA) sets a goal of giving half of all sales licenses to those who qualify as “social equity applicants.”

Applicants who fit one or more of those categories will be given additional priority if they:

What Services Will be Offered to Social Equity Candidates?

“That’s the big missing piece of the puzzle that we haven’t seen in other states,” said Melissa Moore, the Drug Policy Alliance’s New York director.

“You can do priority licensing for social equity, but if there isn’t an avenue for people to be able to access capital it becomes a moot point because of federal prohibition it’s just about impossible for people to access the normal type of small business loans that would generally be available,” she added.

Nathaniel Gurien, CEO of a Manhattan-based cannabis consulting firm, told THE CITY the incubator, which will give financial advice to applicants, is crucial to the success of social equity efforts.

Gurien said the educational component could help everyday New Yorkers who may want to use existing skills to pivot to legal pot sales.

“Like in Times Square, you have all these tour bus hawkers,” said Gurien. “Some of those guys who may live in The Bronx and qualify for minority equity licenses, they can get a decent low-interest loan from one of these business development [agencies] with cannabis-related funds.”

How Will Underserved Communities Benefit?

The combined tax revenue on cannabis products, expected to eventually yield $350 million annually, will fund the planned Office of Cannabis Management and other agencies that have new responsibilities under the law, including the Office of Court Administration, state police and the state Department of Motor Vehicles.

About 40% of the remaining money will go to the Community Grants Reinvestment Fund. Qualified community organizations and local government agencies can apply for grants to help areas that were disproportionately affected by federal and state policies surrounding marijuana.

In New York City, this likely means that the next mayor will play a large role in how some of the money is spent.

License applicants who put forward plans that include community benefits and ways to help people impacted by the drug wars are to be given additional preference as well.

Susanna Short, a spokesperson for a Massachusetts dispensary called Mayflower, told THE CITY that pushing businesses to do their part to uplift neighborhoods has led to stronger community ties. There, Mayflower has created community gardens, hosted skills seminars and launched a fellowship program.

“It’s not a matter of compliance, it’s a true commitment,” Short said.

What Type of Licenses Can Eligible Applicants Apply For?

The MRTA allows for nine different licenses and permits that pot entrepreneurs can eventually apply for:

How Can Social Equity Applicants Apply for a License?

The short answer is we don’t know yet. The law doesn’t outline when the Office of Cannabis Management will open or when members of the Cannabis Control Board — a group of five individuals chosen by the governor and the state Legislature that will oversee the new agency — will be in place.

That being said, marijuana dispensaries could open by April 1, 2022. So Cuomo and the state Legislature will have to pick members of the control board within the next few months to get the bureaucracy going.

When Will Records Be Expunged?

The act is short on details and Cuomo’s press office didn’t respond to questions. But the legislation sets forth a timeline of expunging records within two years after the bill’s signing.

The new law builds on one the legislature passed in 2019. It now will provide for an expanded expungement of convictions for marijuana or concentrated cannabis offenses.

So When Will We Be Able to Buy Legal Pot?

The bill has set April 1, 2022 as the first day that New Yorkers can buy recreational weed. And because New York State is allowing medical marijuana shops to partially integrate into the recreational market, there are already a handful of operations that should be ready by that time.

It became legal to smoke, consume or carry three ounces on Wednesday.