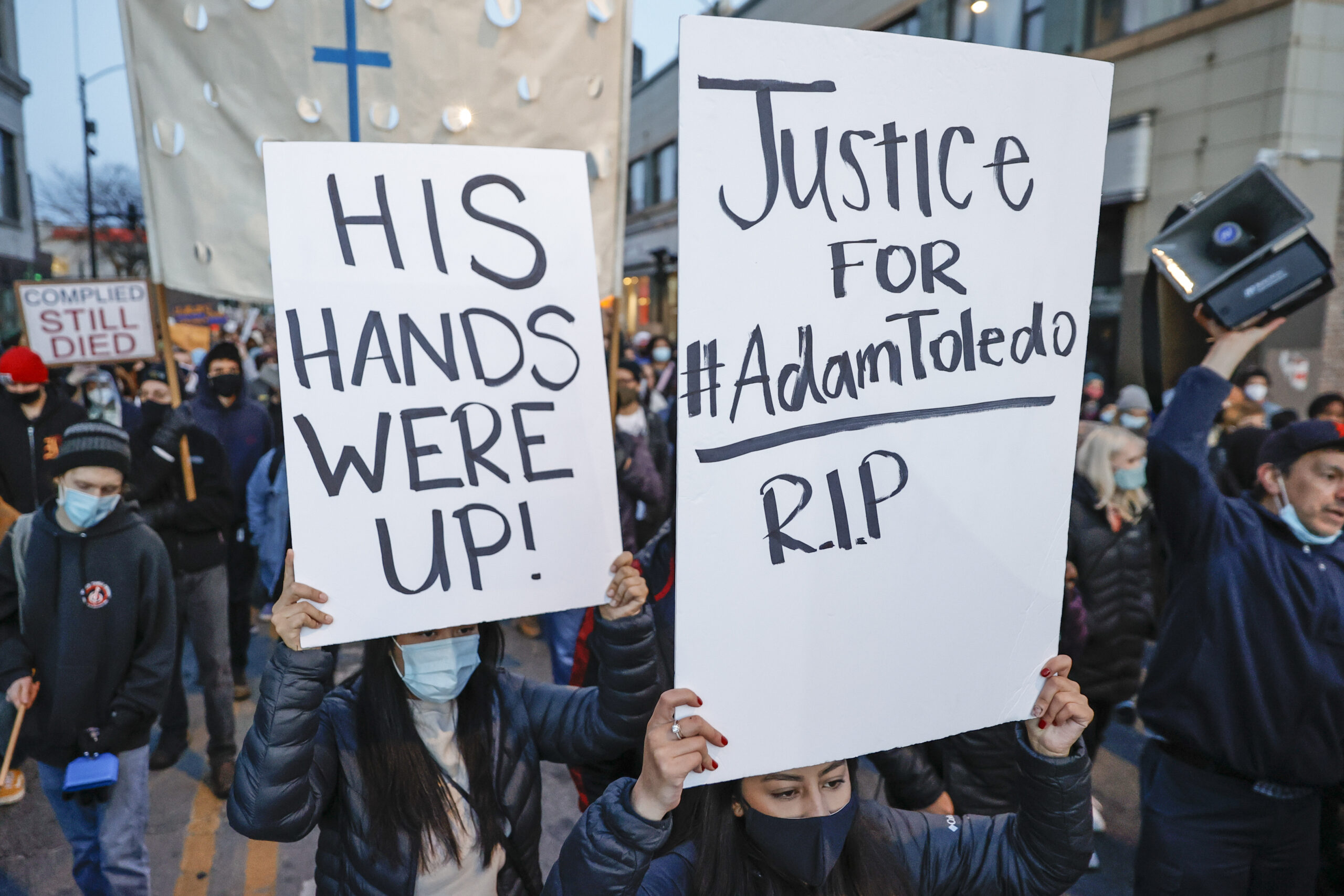 Maria Gandara started off some tough conversations with her students in recent days by acknowledging the dizzying reality facing her eighth graders.

The months have brought COVID-19 hospitalizations and deaths among family members, intense isolation, an uptick in gun violence near their Southwest Side homes, and news of more police killings of Black and Latino people in American cities — most recently of 13-year-old Chicago student Adam Toledo in a neighborhood not far from theirs.

For Chicago educators, the past few days means again having to confront questions of police violence, often informed by videos on the internet that many of their students will see. Classroom teachers often are the emotional first responders to students who may share names, zip codes or life stories with the young people affected by police violence, and some say they shoulder a heavy responsibility of tending to their students’ mental health needs on campuses short of counselors and social workers.

Chicago Public Schools has urged teachers to address Toledo’s death. In a guide it put out last week, the district encouraged “discussion, learning, and sense-making in supportive classrooms.” Such conversations, which can be complicated and emotionally fraught, bring up a host of dynamics that are prevalent outside of classrooms, including the race and lived experiences of both teachers and students at a moment of racial reckoning around the country.

The district has encouraged teachers to hold classroom conversations about police brutality before: The police shooting of a former Chicago student, Laquan McDonald, in 2014, set off a wave of promised reforms to the city’s police department and prompted the district to compile classroom discussion guides — though, at the time, Chicago Public Schools asked teachers to “stay neutral” when talking about the court trial of the officer who fired 16 shots at McDonald and killed him.

Chicago Public Schools did not call for neutrality in recent days as a verdict came down in the case of Derek Chauvin, the former police officer who murdered George Floyd in Minneapolis, or the Toledo case, which has spurred community groups in Chicago to amplify their calls for new police reforms.

Mueze Bawany, a high school teacher at Roberto Clemente Community Academy in Humboldt Park, said he did not use the district’s guide, turning instead to another resource: Reparations Now, a mandated lesson plan for eighth and 10th graders. That curriculum covers the city’s troubled legacy of police torture and crimes committed by officers against scores of young Black and Latino men under the decades-spanning command of former officer Jon Burge.

“It gave us this venue to tell kids: There is a history of this in Chicago,” he said. “I use that as an entry point into a discussion.”

Bawany said the questions his students asked underscored the weights they are already carrying: grief from a year of COVID-19 and uncertainties about their own futures.

Some students mentioned that they would spend time outside of their homes because family members were doubled up or they had little personal space, challenging questions raised in news reports about why Toledo was out late at night.

Others said they felt weighed down with adult responsibilities and Toledo’s killing only intensified that feeling. “That 13 is old enough to be considered a threat,” said Bawany. “How much justice really exists for people of color?”

In classrooms, teachers connected conversations to ongoing lessons about the Constitution or social justice. Others simply offered space for students to talk.

Tanisha Hall, an English teacher at David Speer Academy, a West Side campus in the Noble charter school network, said working throughout the school year to make her virtual classroom a place where ninth graders are encouraged to speak out helped her tackle the discussion about Toledo. Still, she said, she carefully set the stage for the conversation: She gave students extra time to journal at the beginning of that class, a daily “cathartic” activity in her classroom. Then, they took time to breathe together in a “Calm Classroom” activity.

Afterward, Hall let students drive the discussion about the killing, kicking it off with open-ended questions and giving students the option to respond in writing in the chat box or unmute and speak up. They explored articles and editorials about the shooting.

“Their emotions ran the gamut, and they had time and space to navigate that,” she said.

The school’s neighborhood, Belmont-Cragin, was also hit hard by the pandemic, and Hall said her students’ perseverance with learning amid interlocking crises has impressed her. The Noble network has spent the school year adopting an antiracist mission, which has meant confronting its own history of “no-excuses” discipline and other practices that disproportionately affected Black and Latino students and engaging students and families on the issue of racial equity.

“Our Black and brown students need validation; they need to understand their agency and feel empowered,” Hall said. “They need their voices and voices of their families to be heard and amplified locally and nationally. They need to see and feel progress born out of that.”

Jessica Kibblewhite, a middle school teacher at National Teachers Academy, similarly rooted her classroom conversation in themes of action and empowerment. Throughout the year, she built social science lessons around stories of resistance movements and youth organizing, as well as activist art, poetry, and music. Kibblewhite said she wanted her students, the majority of whom are Black, to see their culture as a tremendous source of power, pride, and strength, and to be able to draw on that when confronted by tragedy.

“It is vital that conversations are centered on students’ voices, naming their emotions, and sharing experiences as they process, and that teachers provide students with consistent, supportive space in which to share community and build critical hope,” said Kibblewhite.

In preparation for conversations she had to juggle while simultaneously teaching students virtually and in person, Kibblewhite said she was forthright with her class that a tough conversation was ahead, that it could be triggering, and that students could step away if needed. She ended the discussion by asking students to explore ways youth have organized against police violence and racial injustice and to imagine different forms of resistance.

“During the discussion, all of my students maintained that Adam should be alive today,” she said.

In her class at Acero-Carlos Fuentes Elementary, Hilary Naffzinger linked discussion of the Constitution and its protections to student perspectives on the Chicago deaths of Toledo and McDonald, and the police killing last week of 20-year-old Daunte Wright during a traffic stop in Minnesota.

“The number of names and cases they bring up can be overwhelming, a startling reminder of what our students carry with them daily,” said Naffzinger.

Toledo’s age brought its own urgency in her classroom.

“I think given Adam’s proximity to my students and his age, this conversation feels different, in that more students can attempt to see this story through his perspective, put themselves in his shoes. Now more than ever, with the alarming rate and regularity of deaths like Adam Toledo’s, it’s easy to hold these stories at an arm’s length because of news burnout and fatigue. But when this is a student they could have known, someone they could have graduated middle school with, it’s much more impactful.”

In her special education classroom, Gandara said she determined one conversation would not be enough. In the end, she held an impromptu virtual conversation the afternoon the video was released, a follow-up conversation at the start of the week, and sent interim emails to her students offering support and telling them she cared about them.

She said she looked at the district’s resource guide, but instead let her own instinct steer the conversations. “For some, (the video could be) a PTSD trigger, especially for one of my students whose (relative) was shot and killed in front of him,” she said. “One of my greatest fears was his reaction.”

But after the classroom discussions — in which Gandara asked students to weigh what they can do in this moment and the group discussed constitutional rights, including the First Amendment’s guarantee of the right of assembly — the boy put a note in the chat. “He wrote, ‘I’m about to cry,’” Gandara said. “For this student to say that in the chat, Wow, I get goosebumps just thinking that I reached that child and he knows that I do care about him.”