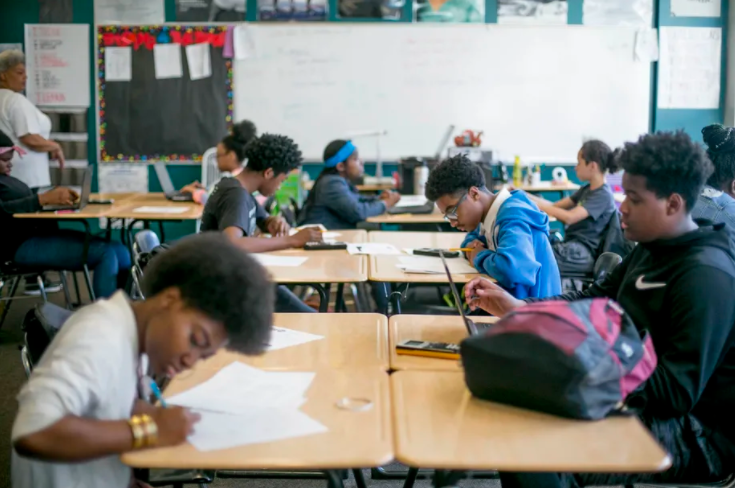 The Detroit board of education voted 3-2 Tuesday night to suspend all in-person learning in the district until the end of the school year, after several community members urged “just one member” to put the matter to a vote.

But seconds after the vote was taken, the three who voted yes were told the vote failed.

At issue: Jenice Mitchell Ford, the district’s attorney, said the board’s bylaws require a majority of the elected board members to approve a motion for it to be valid. Two board members — Misha Stallworth West and Corletta Vaughn — were absent from the meeting.

“You have to have four to approve any action item on tonight’s agenda,” Board President Angelique Peterson-Mayberry said.

The vote came nearly four hours into the regular board meeting, after a public comment period. Several of the nearly 20 people who spoke urged the district to shut down in-person learning because of Detroit’s high COVID-19 rates. The district has paused in-person learning for three weeks after spring break, with students expected to return to buildings April 26. During the pause, students have been learning virtually.

Benjamin Royal, a district teacher who has been leading protests against in-person learning since last summer, said there is “an urgent necessity of closing the schools now and keeping them closed at least through the remainder of the year.”

Royal said schools “cannot be safely reopened until all students are vaccinated and COVID testing confirms the coronavirus is no longer spreading in our community. This is a decision this board can make tonight. It only takes one board member to make a motion to put it to a vote.”

The board member who made the motion was Georgia Lemmons. Sherry Gay-Dagnogo and Deborah Hunter Harvill supported her. Voting against the motion were Peterson-Mayberry and Sonya Mays. The vote to suspend doesn’t affect students who have been going to school buildings to attend the district’s learning centers. In those centers, students can learn virtually, but under the supervision of school staff.

At the time of the vote, about 200 people were still tuning into the virtual meeting, a board member commented.

Superintendent Nikolai Vitti said he is concerned that the board action would further disenfranchise district parents who want in-school learning for their children. Earlier in the meeting, he had provided the board with information showing most surrounding school districts in Wayne County offer in-person learning. The Detroit district has about 19,000 families who responded to a survey saying they want their children in school buildings, but the district can’t accommodate them because there aren’t enough teachers willing to be in person.

Suspending in-person learning for the rest of the school year is “going to be shocking for families to hear that. I do believe we risk losing students,” Vitti said.

Mays had said before the vote that she didn’t think it was proper for the board to make such a big decision with two members absent.

“I just would hope that for a decision as weighty and important as this, we can find time and space to ensure all board members are included in the conversation,” Mays said.

But Gay-Dagnogo said the board needs to make a decision now so families have time to plan.

“How do we adequately plan if we keep vacillating back and forth. We need a consistent plan,” Gay-Dagnogo said. “It’s time for us to … make sure people are safe.”

It reads: “No act shall be valid unless approved at a meeting of the Board by a majority vote of the members who are: (i) elected or appointed to and serving on the Board; and (ii) authorized to vote. Also, a proper record must be made of the vote.”

The insistence that four votes were needed affected a number of votes the board took after the controversy, with multiple 3-2 votes.

And later, Gay-Dagnogo found another version of the board’s bylaw on the district’s website that said a vote is valid if a majority of the board members present approve it. That prompted her to say that “until we get clarity … the vote we took stands.”

That version of the bylaw isn’t dated, though it is what shows up during a simple web search for district bylaws. But it is not on the portion of the district’s website that hosts updated board policies. Gay-Dagnogo said having an outdated version of the policy on the website created confusion and “that is exactly why the public lacks trust in the district.”

Vitti said district officials would get to the bottom of why the old version of the board policies is still on the website and have them removed.

Prior to the vote, Vitti urged the board to reconsider and have a broader discussion at its May meeting. He said he was committed to not reopen school buildings until then.

“I understand this is the board’s purview to make this decision. The action, if taken by the board tonight, is unprecedented,” Vitti said. He said that in his four years as superintendent, the board has “never taken an action like this without working through it in committee or a special meeting.”