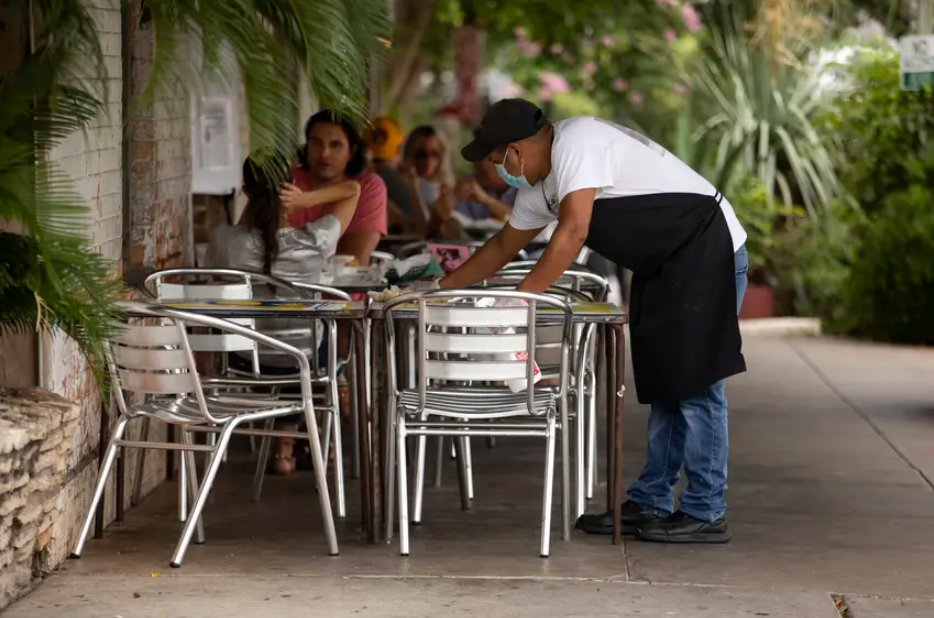 Greater disparities to emerge in Texas as unemployment benefits, protections against evictions and utility shutoffs end

Rush hour traffic has returned, and downtown bars are loud, crowded and rowdy again. But the easing of the COVID-19 pandemic also means economic safety nets are vanishing — and Texans struggling to make ends meet may soon fall even further down a financial hole this summer.

Federal unemployment benefits end for Texans on Saturday. Their electricity can be cut for nonpayment starting Tuesday. For renters, evictions will begin to proceed normally again at the end of July.

“We’re going to see disparity in the coming months as social safety nets are being taken away, and people are going to have to figure out all these things on their own,” said Pia Orrenius, a senior economist at the Federal Reserve Bank of Dallas.

Economic indicators show that while rents stayed relatively unchanged in 2020, landlords are increasing rents again. Inflation is up, and expected to keep climbing. Credit card companies that offered forbearance or lower payments are ending those accommodations.

“This is a big transition back to some new normal, and some families are going to be squeezed more than others,” Orrenius said. “Everything is going to hit at once.”

A U.S. Centers for Disease Control and Prevention order had halted evictions of renters who meet certain criteria, but that will expire at the end of July following this week’s one-month extension — which the agency said will be the final one.

A moratorium on electricity disconnection was put in place by state regulators in February due to the winter storm that knocked out power to millions of Texans for days, but the Public Utility Commission recently lifted it; companies now have to give delinquent customers 10 days’ notice before shutting off their power.

And a federal unemployment benefits program that provided relief to contract and gig economy workers, as well as an extra $300 per week to people receiving state unemployment benefits, will end Saturday. Gov. Greg Abbott opted Texas out of the federal assistance early, even though it could have been extended until September. Hundreds of thousands of Texans are currently receiving the benefits.

Nakita Saddler, 35, was among the millions of people who lost her job last year. Previously a restaurant server in Odessa, she hasn’t been able to find full-time work since. And as a mom still providing for three of her four children, the twice-a-month unemployment payments of about $900 are usually enough to pay rent but little else, she said. She’s about $3,500 behind on the utility bill.

“I am worried [about disconnection] because I have paid, little by little, but with interest and the bills for the house … it’s hard,” she said. But, she added, “sometimes God makes it happen.”

The end of the pandemic will be unequal

With nearly 40% of Texans fully vaccinated and businesses reopening or returning to in-person services, economic circumstances for many have improved: Texas’ unemployment rate was 6.5% in May, much lower than last May’s 11.6% when some businesses began reopening after a monthlong shutdown to slow the spread of COVID-19.

Still, almost three years’ worth of jobs created in Texas have been destroyed in the recession; the state’s economy has more than 400,000 fewer jobs than before the pandemic, according to seasonally adjusted state data. The pain isn’t distributed equitably.

White-collar workers could work from home and largely avoided job cuts, while workers in restaurants, bars, hotels, and businesses linked to recreation, transportation and personal care saw their jobs evaporate — and many remain financially underwater or unemployed.

For example, Texas’ accommodations and food industry, which includes staff at hotels and restaurants, employed about 1.1 million people in May. Before the pandemic, the last time the sector’s employment has been that low was March 2016.

And, even though accommodations and food businesses have added a net 362,000 jobs since May of 2020, the industry remains down 118,000 jobs since the start of the pandemic-related business shutdowns, according to state employment data.

Meanwhile, the Texas’ financial industry employed 825,800 people in May — 7,600 more people than in February 2020, just before the pandemic shutdowns began, and an all-time high for the sector.

The growing disparity between the employed and the unemployed as the pandemic eases has aggravated longstanding inequities among racial groups. People of color are disproportionately employed in the service industries hardest hit by the pandemic, according to an analysis of employment data by the Federal Reserve Bank of Dallas, and unemployment rates reflect that: In February, 12.3% of Black workers in Texas were unemployed, compared to 9.3% of Hispanic workers and only 5.1% of white workers. In February 2020, the unemployment rates for each group was 4.7%, 4.7% and 2.5%, respectively.

Losing the extra $300 in benefits will likely change people’s habits, said Orrenius, the Dallas Fed economist. The higher unemployment benefits likely prevented an even steeper drop in consumer spending by providing cash to families that needed it when jobs were scarce. Now, consumer spending among low-income households may vanish along with that extra money.

She pointed out that many women — especially women of color — were forced to leave work during the pandemic to take care of children; now, they’ll have to find child care in order to get a job.

Immigrant communities also were hard hit by COVID-19 and tend to lack health insurance at higher rates; those families are struggling with medical debt (many also did not qualify, early on, for stimulus checks and federal unemployment benefits if they lived in a mixed-status family). Unvaccinated people are at risk of catching new, more infectious variants of COVID-19 that are still spreading.

“There’s a robust labor market out there for people to go into, but then there are these other complications that have not completely gone away,” Orrenius said. “If you think you see disparity now, we’re going to see [more].”

There are some programs still in place that Texans who are struggling to pay their bills can apply to for help. The Texas Rental Relief fund launched in February and has provided rent and utility bill assistance to more than 61,000 households. About $14.8 million has been dispersed for utility bills alone, according to data from the Texas Department of Housing and Community Affairs.

If you get a utility disconnection notice, the Public Utility Commission recommends that you:

To qualify for assistance from the Rental Relief fund, the household must have an income that is 80% or less than the area’s median income and have a monthly rent that is below the program’s limit of $4,600. For example, a family of four in Harris County qualifies if their household earns $63,350 or less and pays less than $4,600 in monthly rent.

However, the $1 billion program has been plagued with problems, KERA reported, and dispersing assistance can be slow. A spokesperson with the Texas Department of Housing and Community Affairs told the Tribune that the process has improved since its launch, but it takes time to process applications that are often incomplete.

Slowdowns in the fund mean that people like Saddler, the Odessa mother, assume that assistance will be too little, too late. She said her power company told her to apply to the fund for help, which she did on May 31. Nearly a month later, she has yet to hear back.

At the same time, she’s about to see her unemployment benefit payments drop by about 30% next week.

This article was originally posted on Greater disparities to emerge in Texas as unemployment benefits, protections against evictions and utility shutoffs end