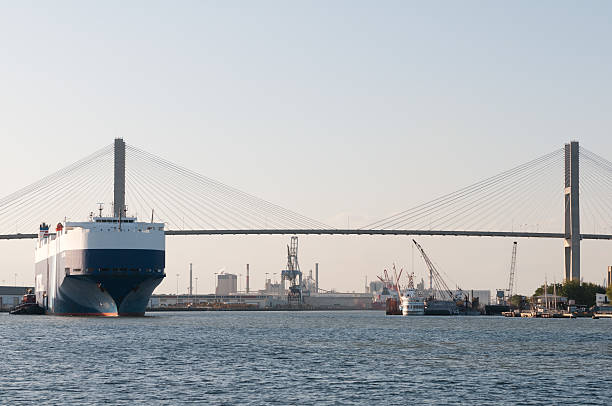 The GPA “will not be prepared to officially either offer or withhold its consent” to the proposed pact with Jasper County by the Sept. 1 deadline, GPA attorney Paul Threlkeld told Jackson County Attorney David Tedder.

The South Carolina State Ports Authority (SCSPA) agreed in March to allow the Jasper County Council assume its share of the 50-50 joint venture with the GPA.

In addition to building the new seaport with Jasper County on the Savannah River, the GPA is pondering an alternate that calls for building a new terminal on Hutchinson Island and raising the Talmadge Bridge to allow larger container ships into Savannah.

South Carolina state Sen. Tom Davis, R-Beaufort, who spearheaded the March effort for Jasper County to assume the state’s half-share control of the project, said “time is of the essence” but the Sept. 1 deadline was arbitrary.

“I believe extending the deadline for the GPA’s consent to Dec. 31 will provide the parties sufficient time to complete their due diligence,” Davis said in a statement.

The SCPCA and GPA formed the Jasper Ocean Terminal Joint Project Office in 2008 to develop a bi-state owned and operated port facility in Jasper County, 8.5 miles downstream from Garden City, Georgia, on a “site widely considered to be the best remaining undeveloped port site on the East Coast.”

The 1,500-acre JOT project was designed to relieve pressure on Charleston and Savannah ports, beginning in 2025, with both states sharing equally in developing the new port. The price tag is estimated at $4.5 billion to $5 billion.

According to analyses, construction between 2025-35 would create 900 direct jobs with an estimated $81 million payroll. The JOT is projected to create 1 million “high-paying” jobs nationwide between 2040-50, generating $9 billion in revenue for South Carolina and Georgia.

The project, however, has been delayed repeatedly to at least 2035 with 2040 and beyond also suggested by the SCSPA, which said there won’t be enough container cargo traffic to justify expansion until mid-century.

Davis and other South Carolina lawmakers said SCSPA’s decision to build a new terminal in North Charleston that doubled that port’s capacity is what set JOT back a decade and prompted GPA to consider alternatives to the joint project.

The South Carolina General Assembly allowed Jasper County in March to take over SCSPA’s role and approved a $550 million bond issue to build infrastructure, including a rail network, for the port.

According to the Jasper Ocean Terminal Project Environmental Impact Statement filed in December by the U.S. Army Corps of Engineers, the proposed JOT will handle 8 million 20-foot cargo containers a year, the equivalent to approximately 35 years of forecast growth in containerized cargo and large enough to meet cargo demand for the entire Southeast through 2055.

• A four-lane divided highway to connect terminal and a 210-foot wide berth;

• A rail yard with double- and single-track rail to connect the terminal site to existing CSX Transportation and Norfolk Southern rail lines;

• A new rail bridge across the Back River near U.S. 17 and across the Savannah River upstream of Garden City Terminal.