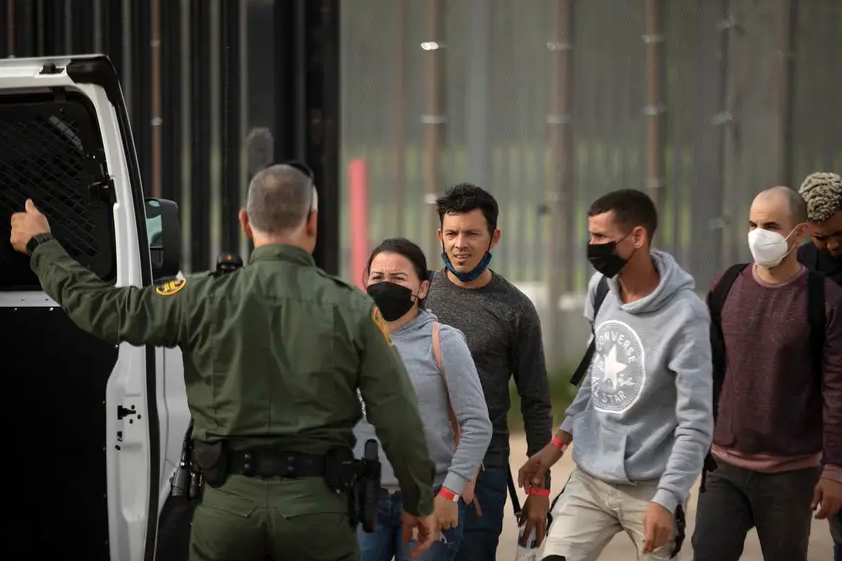 A federal judge on Tuesday blocked Gov. Greg Abbott and the state of Texas from ordering state troopers to pull over drivers transporting migrants “who pose a risk of carrying COVID-19.”

U.S. District Judge Kathleen Cardone granted a temporary restraining order against Abbott’s move, meaning it will be blocked while the case continues to unfold. The U.S. Justice Department sued Abbott and Texas on Friday, a day after U.S. Attorney General Merrick Garland threatened to take legal action if Abbott didn’t rescind his order, calling it “dangerous and unlawful.”

In a statement later Tuesday, Abbott’s press secretary said the state looks forward to presenting evidence that supports his order.

“The Court’s recent order is temporary and based on limited evidence,” Press Secretary Renae Eze said in the statement.

Cardone still must decide whether Texas’ move is constitutional, and her temporary restraining order is set to last until the court’s next hearing on Aug. 13. Abbott has defended his order as necessary to help prevent the spread of COVID-19 in Texas, while advocates for migrants say it would disrupt federal immigration efforts and invite troopers to racially profile people.

Fernando García, executive director for the Border Network for Human Rights, applauded the decision. He called the state’s defense of the order hypocritical in the first place, given Abbott’s ban on COVID-19 prevention measures like mask mandates in schools.

“It was very clear that the state was advancing an anti-immigrant agenda rather than concerns for border residents,” he said.

Abbott’s order, issued Wednesday, allows Texas Department of Public Safety troopers to reroute civilian vehicles back to their origin point or a port of entry or to seize the vehicles if police suspect the driver is transporting migrants who are infected with the virus.

U.S. attorneys argue that Abbott’s order would interfere with the federal government’s ability to transport migrants between facilities. Federal officials spend over $200 million annually to employ contractors to transfer migrants and to avoid overcrowding facilities, according to court documents. U.S. Immigration and Customs Enforcement has more than 20 contracts with Texas private service providers and county governments for transportation services that cover more than 8,000 miles per day.

According to court documents, an average of over 1,100 migrants are transferred every day from Customs and Border Protection custody at the southwest border “almost exclusively by contractors.”

“The sheer number of noncitizens encountered by CBP along the southwest border and transferred to ICE custody makes it impossible for it to use law enforcement officers — as opposed to contractors — to transport them while still executing its law enforcement responsibilities,” Russell Hott, an ICE Enforcement and Removal Operations assistant director, said in court filings.

Brian Hastings, chief patrol agent for U.S. Border Patrol, said in court filings that if the executive order prevents the transport of migrant children and families, it would cause them to be held for longer periods within Border Patrol facilities, violating federal rules. It would also crowd the facilities and worsen the chance of COVID-19 spread, he said.

“In our constitutional system, a State has no right to regulate the federal government’s operations,” the DOJ argued in a motion asking the judge to block Abbott’s order.

Abbott blamed the Biden administration for the problem, saying in a statement that it doesn’t enforce immigration laws. He challenged the validity of the lawsuit and said his “duty remains to the people of Texas, and I have no intention of abdicating that.”

The Biden administration has continued to turn back many migrants under Title 42, a Trump administration-era practice that allows agents to make migrants return to Mexico because of the risk of spreading COVID-19.