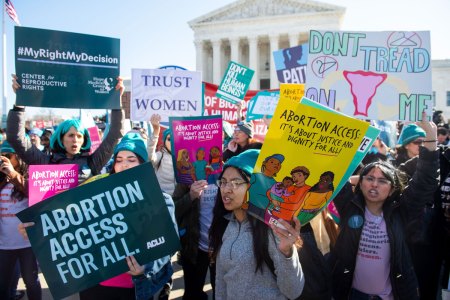 After a year of legal fighting over mifepristone, the Food and Drug Administration has reversed itself, allowing the abortion medication to be prescribed during the COVID-19 pandemic through telehealth.

The FDA, under the Donald Trump administration, would not allow mifepristone to be prescribed through telehealth, citing safety concerns, during the COVID-19 pandemic. Because of 20-year-old regulations around mifepristone, patients are normally required to travel to a clinic to pick up the pill.

But, the pill can be safely taken at home.

In the spring of 2020, after the COVID-19 pandemic began, the American Civil Liberties Union (ACLU) sued the FDA on behalf of the American College of Obstetrics and Gynecologists (ACOG). ACOG argued that mifepristone could safely be administered through telehealth and that forcing patients to drive, in some cases, hundreds of miles to pick up one pill during a pandemic was both unnecessary and not safe.

Decades of studies already exist that demonstrate the safety of mifepristone. It can be taken up to the first ten weeks of pregnancy and a third of abortion patients in the first eight weeks of gestation chose that method, according to Women’s Health Policy.

But, the FDA appealed and the case went to the U.S. Supreme Court where, just a week before the end of Trump’s term in office, a conservative majority ruled in favor of the FDA. This forced abortion patients to begin traveling during the pandemic to an abortion clinic in order to pick up the medication.

Patients could still return to their home to take the medication.

Under the Joe Biden administration, the FDA has reversed that in-clinic pick up requirement for the duration of the public health emergency. The agency made the announcement last week that mifepristone can be provided to patients through telemedicine.

Ellie Rushforth, an attorney with the American Civil Liberties Union of New Mexico, said this is an important win for New Mexico.

“This decision means that New Mexicans can access the abortion care they need without risking exposure to a deadly virus unnecessarily. Medication abortion care can be safely and effectively administered through telehealth and telemedicine,” Rushforth told NM Political Report.

The regulation that prohibits mifepristone from being available outside of the COVID-19 pandemic through telehealth also affects patients who experience miscarriage early in pregnancy, Rushforth said.

“The treatment is very similar if not exactly the same,” Rushforth said. “This kind of care and treatment can be managed through telemedicine and telehealth and it’s often how patients want to manage it. They want to be in the comfort of their own space.”

Mifepristone is the only drug of its kind that is safe to take but still requires the FDA regulation, called Risk Evaluation and Management Strategies (REMS), advocates have said. The FDA has to lift the REMS on the medication to allow providers to prescribe the medication to a patient rather than requiring the patient to come to the clinic to pick up the pill. The FDA has said it needs more data to ensure mifepristone’s safety before lifting the REMS, even though mifepristone has been in use in the U.S. for abortion care since 2000.

Rushforth said the reversal in FDA’s regulations during the pandemic, which was due to a change in administrations, shows that the in-person clinic pickup regulation around mifepristone is politically motivated.

“They (the FDA) relied on several studies showing that it (mifepristone) does not appear to show any increases in safety concerns with respect to medication abortion. That is really important data for the case that many of us in reproductive health rights and justice make that the REMS attached to mifepristone with respect to medical abortion is, in fact, a result of political opposition to abortion care,” Rushforth said.

A lawsuit the ACLU of Hawaii and the ACLU launched on behalf of an abortion clinic in that state has been making that argument. That case is still pending in federal court in Hawaii.

Rushforth said the FDA’s reversal is also a win for health equity access because people of color, and those who live in rural areas or are low income struggle the most to get to a clinic in order to have an abortion.

“For so many, it’s meant time off from work, securing child care, travel funds, borrowing a car, accessing public transportation during a public health emergency to travel potentially hundreds of miles to pick up one pill they could take at home and take at their preferred time. There is no medical reason to require people to pick up one pill,” Rushforth said.