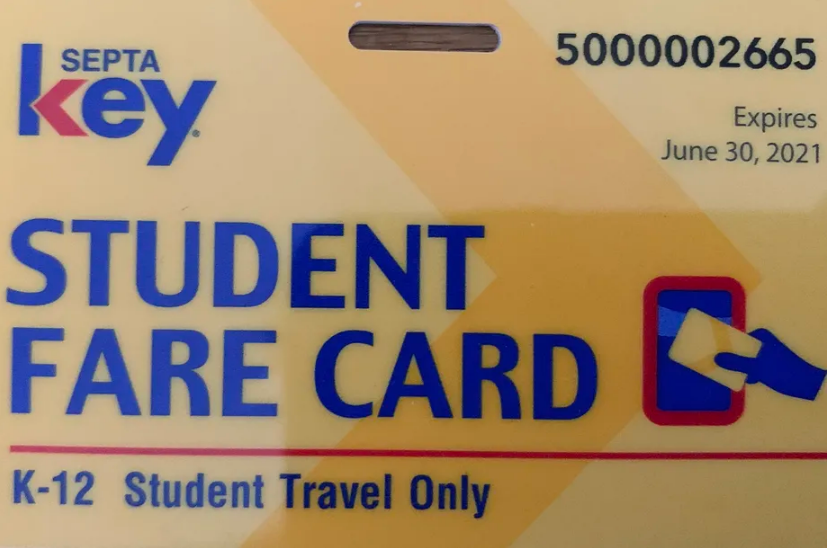 Superintendent William Hite was joined Thursday by officials from SEPTA and the city to unveil a new SEPTA fare card that will replace weekly TransPasses for 65,000 students eligible for free public transportation to school.

“One of the benefits is that this card remains active as long as the student remains eligible,” said Maureen Edozie, the district’s director of business operations.

The partnership is an effort to make it as easy as possible for students to ease back into traveling to and from school after more than a year when almost all students learned virtually, Hite said. Regular student travel will also have a major impact on SEPTA, which has seen a significant drop in ridership during the pandemic.

In order to be eligible for free transportation, students must live at least a mile and a half from the school they attend.

Students in grades one through six who meet the distance requirement and other eligibility criteria are transported by yellow buses. Seventh through 12th graders ride SEPTA. Rules for special education students are different, and are often included in a student’s individualized education program or IEP.

Students in district, charter, parochial and private schools ride for free on buses, trolleys and the subway. If they use regional rail, they can upgrade the card at a cost of $10 a week. As with all public transportation, they will be required to wear masks while riding.

The cost is subsidized by the district, which pays SEPTA and is then reimbursed by the state.

Making sure students had their weekly TransPasses was a major administrative undertaking for schools, one that now will go away. Instead, eligible students will receive their new Key cards on the first day of school. On that first day, before receiving their fare card, students can ride SEPTA for free. School is scheduled to start on August 31.

“It relieves a tremendous burden on those administrators,” Hite said.

The card, contact-free and with a reusable chip, is part of SEPTA’s upgraded Key system. It will work between the hours of 5:30 a.m. and 8 p.m. Monday through Friday. Students can use it up to eight times a day.

The expanded hours will better accommodate students who have obligations and activities before and after school, including clubs and sports.

“We are thrilled with this partnership,” said SEPTA General Manager Leslie Richards, “and to bring the convenience of SEPTA Key to students.” It is a major part of the city’s return to normal, she said.

Michael Carroll, deputy mayor for transportation and infrastructure, said that the city is providing more information to families about Safe Routes Philly, an initiative to help students travel safely to school on foot, bike or skateboard.

“We have lesson plans, activities and resources in English and Spanish,” he said. That is part of Mayor Jim Kenney’s Vision Zero initiative, which has a goal of eliminating traffic deaths by 2030.

Richards said that SEPTA has been upgrading and cleaning its vehicles and stations. Improvements include new HVAC systems. The air on its buses, trains, and trolleys, she said, is replaced every two to three minutes. That’s even more often than the standard for operating rooms, she said. In April, SEPTA unveiled a $1.5 billion budget that relied heavily on pandemic relief money to meet expenses and improve conditions.

“Our number one priority is safety for our employees and riders,” Richards said. “We are all eager to see students coming back to school and riding our system. It’s been a tough year and a half. Students want to learn, see their friends, be with their teachers and have interactive learning experiences.”

Hite said that the district is eagerly anticipating updated guidance from the Centers for Disease Control and Prevention or CDC on requirements for schools as they return to full in-person learning. Now the intention is for students to wear masks and for periodic testing for COVID-19, especially since younger students are still not eligible for vaccinations.

If the CDC maintains the three-foot social distancing requirement in classrooms, that could pose a problem in classrooms where enrollment is high. The maximum permitted class size in Philadelphia is 33 in the upper grades and 30 in lower grades.

Philadelphia, unlike most big cities, is also offering a virtual option to families, but it will be nothing like virtual learning was over the past year, when students were taught by teachers from their home school.

The district already has a virtual school for grades six through 12, and will expand it to lower grades. Philadelphia Virtual Academy is operated by the Chester County Intermediate Unit.

He said information about enrolling will be available soon.

“Our goal is to get as many as possible back into school and in person,” he said. “That is what we are striving to do.”