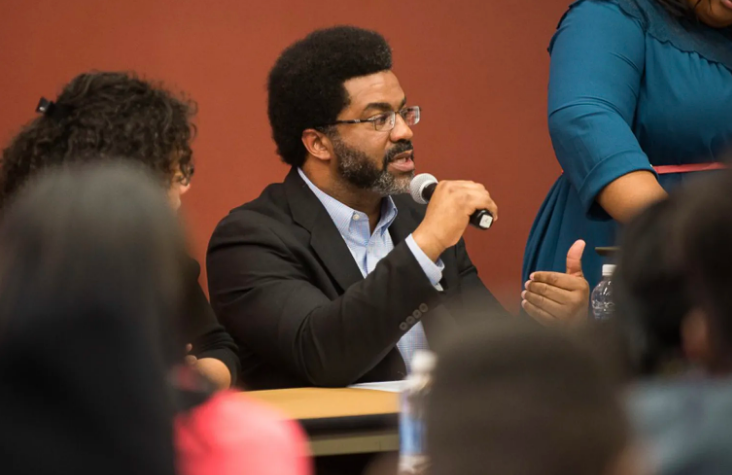 In Valerie Haley’s kindergarten class at Rowen Elementary in West Oak Lane, the shift to virtual learning affected students differently: The students who have parents at home, have materials at their disposal, those are the ones who seem to be more engaged than others.

Across the city, at McCall Elementary, Iwa Cliggett and her team of English as a second language teachers noticed that students who already struggled in the classroom were the ones most affected by remote learning. Students with attention issues had a harder time focusing.  Students who were easily frustrated became more so, and students who were just beginning to learn English were increasingly isolated.

Educators and literacy specialists have been worried that the pandemic and the resulting shift to virtual learning could exacerbate existing gaps in literacy rates, largely along socioeconomic and racial lines. That’s one reason Superintendent William Hite wanted to get the district’s youngest students, most of whom are learning to read, back in school buildings this spring.

“We know that children, especially our youngest learners, and those with complex needs, learn best in person,” Hite said earlier this year, noting particular concern about children learning to read.

The abrupt shift to remote learning a year ago has raised concerns about the long-term effects on early childhood literacy rates, particularly in a city where only 17% of public school fourth graders read at or above “proficient” standards, according to 2019 test data from the National Association of Educational Progress, or NAEP.

“Our students were already being underserved in their literacy instruction. And so now with the pandemic, it’s only gotten worse for many students,”  said Sharif El-Mekki, CEO of the Center for Black Educator Development.

Data on the effects of the pandemic still are limited, but there is some evidence that the pandemic has not yet had the disproportionate effect on already disadvantaged students that many fear.

District officials released a report in January that found a significant decline in internal reading assessments for grades one to five between the winter before the pandemic began and the fall of 2020. (No tests were given last spring.) Students who were in kindergarten last year and first grade in the fall had the most dramatic drop, of 15 percentiles.

Most racial groups, however, were affected about the same: Black, white and Asian students all saw scores decline by about 6 percentiles, while Latino students dropped by about 5 percentiles.

Similarly, students considered “economically disadvantaged” dropped about the same as their wealthier peers. The testing, which was done on the same group of students from one academic year to the next, provides a small window into the pandemic’s effects.

Nyshawana Francis-Thompson, executive director of the district’s Office of Curriculum and Instruction, said the limited data the district has so far has not seemed to show that disparities among groups have worsened, but they also haven’t improved. Wide pre-pandemic disparities in early literacy rates across these groups combined with across-the-board learning loss is a significant cause for concern, she said.

“The achievement gap is not new during the pandemic,” said Francis-Thompson, adding that early literacy has become an area of particular focus for her office beyond the immediate effects of the pandemic.

Board members discussed literacy rates at a meeting on Jan. 28 in which district officials noted that nearly 72% of first graders scored either “below average” or “well-below average” on the district’s reading assessments this fall. Additionally, only 32% of third graders were reading at grade level.

The report, prepared for the Philadelphia Board of Education’s “goals and guardrails” initiative, starkly outlined how the largest disparities in early literacy break down on racial and socioeconomic lines, though all students were far from the district’s final literacy goal. The few schools where most students are at grade level enroll fewer students and are disproportionately white.

“I think it’s those who work in literacy and education are pretty certain that children, while they’ve been given education this year, it’s different,”  said Jenny Bogoni, executive director of Read by 4th, a coalition working to ensure that Philadelphia students are reading on grade level by fourth grade. ”They’ve likely not absorbed the same level of instruction as they would have in a normal year.”

Bogoni noted that the toll the pandemic has taken on literacy is expected to affect communities experiencing poverty “at a much higher rate or in a much more negative way” than others.

Students living in poverty are more likely to have parents who had to juggle jobs while finding child care, lack internet connectivity in their households, or may not have materials in the home to promote reading. They are also more likely to live in communities that lack resources and experience instability.

“You’re talking about the racial stress, the racial injustice, the educational injustice that’s been heaped on these communities for generations,” said El-Mekki.

“Now we’re talking about literacy on top of that?” said El-Mekki. “This is a double whammy that is very hard for children to just ‘overcome’.”

Both the district and Read By 4th believe that more data is necessary to fully understand the ways in which student learning has been affected by the pandemic.

According to district data, Black, Latino and Native American students are the racial groups farthest from the district’s literacy targets. Only 31% of Black students, 23.5% of Latinos, and 22% of Native American students in kindergarten through third grade are at or above grade level in reading. Similarly the report found that only 20% of English learners, 26% of students in special education, and 30% of economically disadvantaged students were on grade level in reading.

Failing to reverse this trend can have lifelong consequences.

“There’s tons of data and research that supports that early literacy is connected to students’ outcome with graduating. And post-secondary,” said Francis-Thompson. “So we need to get our youngest people back in front of us so that we are addressing their needs.”

Beyond the pandemic, she said that her office is looking at several strategies. First they are transitioning early literacy instruction to be more focused on the “science of reading.” But Francis-Thompson said that is not enough to address the disparities.

The district also is writing new curriculum units designed for early grades that center the experiences of students of color. The Philadelphia school district is predominantly Black and Latino.

“There is a need to look at the identity of Black and brown children,” she said.

By fourth grade, students are less likely to get targeted reading instruction and instead start to be given material to read for learning.

“Not only is your reading skill going to be behind and you’ve got less of a chance to make it up,”  said Bogoni, “but it means when you’re sitting in science class and asked to read a paragraph about whatever the science lesson is, or reading a math problem or reading your social studies material, you get behind in all these other subjects because you’re behind in reading.”

For El-Mekki, the solution is multi-faceted. Not only does he think there needs to be a shift in the way teachers are trained to teach reading, they also need to know better how to engage students of color. And there needs to be more funding for districts like Philadelphia.

Francis-Thompson said that the district is trying to do just that over the long term. More immediately, for students most affected by the pandemic, officials are discussing a wide range of options, including more one-on-one instruction and an extended school year.

Cliggett agrees that more individualized support is necessary. “Even in small groups, sometimes it is not enough,” said Cliggett, “not when students can be so far apart.”

Bogoni also agrees. For her son, who was a struggling reader, one-on-one tutoring was the only intervention that worked. She sees this as a crucial strategy for lagging readers.

The concern with one-on-one tutoring is cost and scalability. The district already has a pilot program that matches high school students who fail English or math courses in the first semester with one-on-one tutors. Francis-Thompson believes that if that program shows meaningful results it could be expanded to lower grades. On the question of scale, she thinks that expanded partnerships with tutoring services and programs could make it work.

Read by 4th is currently doing research into this area. “I think we do have to look at how to scale tutoring in a way that makes it accessible to all families,” Bogoni said. Even having more trained adults in the classroom would make a difference. “If I’m thinking about policy and how to use the stimulus dollars that are going to be flowing, I think we probably need more adults trained around supporting teaching and reading in classrooms in the coming years.”

Another option is more effectively using the summer as an extension of the academic year. The summer break often results in what’s known as the “summer slide,” in which a student’s skills regress after a summer off. After the past year, educating students throughout the summer has taken on particular significance (with some wondering whether it is time to rethink the academic calendar entirely).

El-Mekki’s Center for Black Educator Development runs the Freedom School Literacy Academy, a program that trains high school and college students in proven literacy teaching strategies and in ways to more effectively reach Black students. Not only does this set up a pipeline for Black educators to enter the profession, but it more effectively reaches some of the communities most affected by the city’s gloomy literacy rates.

The Academy, focused on kindergarten through second grade, combines a strong emphasis on phonics and phonemic awareness and fluency with culturally specific instruction that targets Black students. This will be the fifth year of the summer program and the center believes it is more important than ever.

El-Mekki said the summer academies are in high demand and the hope is to double their capacity to reach 200 students. But even then El-Mekki said they expect there will be a waitlist. They also hope to run an extended program throughout the year starting this fall.

Francis-Thompson said that the district is also looking seriously at more options to extend instruction into the summer as a way to get students most significantly impacted by the pandemic additional help, although the details have not been released yet.

One thing everyone is clear about: making sure the youngest students have the building blocks to literacy has become a top priority.

“Anytime we are talking about being a world-class city and we have a populace this high that can’t read on grade level, we’re lying to ourselves,” said El-Mekki. “Being able to read is a human right.”