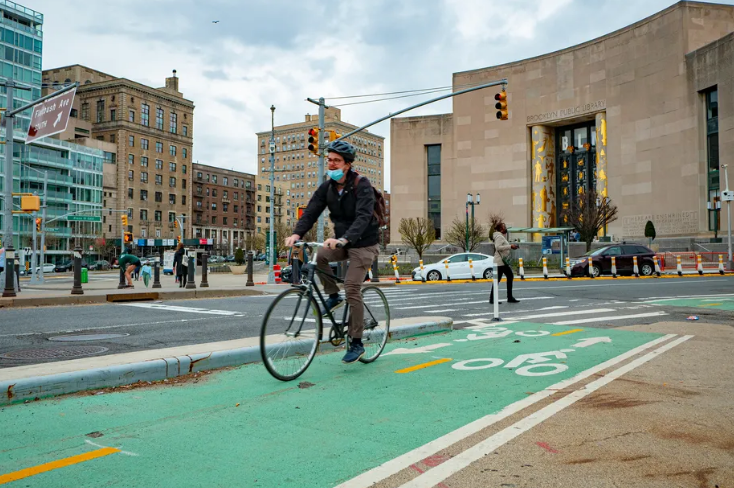 Even before Biden unveiled his massive proposal in Pittsburgh Wednesday, more than 30 environmental justice, cycling and parks groups had sent a letter to New York’s congressional delegation. Their plea: a $1 billion commitment in federal stimulus funds to build out new and link sections of existing trails separated from automobile traffic.

“Right now, we have all these little pieces here and there, but without the greenways being connected, they are not able to deliver all of the benefits that they are capable of,” said Terri Carta, executive director of the Brooklyn Greenway Initiative.

“The infrastructure is too piecemeal,” added Carta, whose group has worked since 2004 on the development of a 26-mile route for pedestrians and cyclists along the Brooklyn waterfront.

While City Hall has committed nearly $60 million through 2024 to annually expand the reach of bike lanes, the boosters of the five-borough greenway system envision larger swaths of car-free space appealing to more than just cyclists.

“They’re not just bike paths, they can be a place where someone is playing dominoes, or just sitting or doing Double Dutch,” said Elizabeth Yeampierre, executive director of UPROSE, an environmental justice group based in Sunset Park, which has a section of greenway in Bush Terminal Park. “The idea really is to expand the amount of open space that’s available to communities.”

The effort to obtain a chunk of Biden’s proposed transportation funding — which would include a broad scope of projects, including roads, bridges, mass transit and railroads — comes with New Yorkers increasingly prizing outdoor space, open streets and cycling during the pandemic.

Nationally, outdoors and cycling enthusiasts have been working for three decades to expand the East Coast Greenway, a 3,000-mile trail that extends from Maine to Florida.

In December, New York announced the completion of the 750-mile Empire State Trail, a collection of paths that lets hikers and cyclists go from New York City to Albany and Buffalo.

“This bike boom is not just a hashtag, it’s very real,” Carta said. “And when we think about infrastructure, we’re not just talking about roads and bridges and water mains.”

The number of cyclists crossing the East River bridges has gone up in the last year, Citi Bike has continued its expansion and cycling shops have experienced a pandemic bump during the pandemic.

“Last year, there was a huge surge of commuters, people wanting to get out there and try it,” said Maria Quesada, a co-owner of JS Cycle, a bike shop in Harlem. “Our hope was that the people would stick to it — some did, and now they’re going to more serious road cycling.”

The March 11 letter sent to the city’s congressional delegation pointed out that greenways already run through every district in the five boroughs, but that “they rarely connect to each other, older segments require upgrades and new parts of the network are still too few and far between.”

The letter notes that 100 miles of greenway that exist “on paper” still need to be developed. Conceived under Mayor David Dinkins, the “Greenway Plan for New York City” was first published in 1993.

Chauncy Young, who lives in Highbridge, The Bronx, said gaps in the greenway along the Harlem River regularly lengthen his bike trips into Manhattan. He prefers to travel along the Hudson River.

“It might add a mile or more onto my trip, but it’s a safer trip to take,” said Young, a coordinator of the nonprofit Harlem River Working Group.

In 2019, after an increase in cycling deaths, the city released the “Green Wave” proposal to annually increase the number of protected bike lane miles. Last year, the city added 45 miles of protected lanes and 29 miles of conventional lanes to a 1,375-mile bike lane network. About 40% of the lanes are physically separated from traffic.

The Green Wave plan “seeks to fill gaps and reach underserved neighborhoods,” according to a spokesperson for City Hall, which is aiming to add 80 more miles of protected bike lanes — meaning they’re physically separated from traffic — by the end of this year.

The city is aiming to have a “citywide protected bike lane network” by 2030.

An infusion of federal money, the advocates say, could help connect missing links in a citywide network whose existing sections span the Hudson River in Manhattan, along Sunset Park’s industrialized waterfront in Brooklyn, the Bronx River and along the East River in Queens.

“The city put out this map of protected lanes and greenways in 2019, but there are big sections that are completely notional,” Orcutt said, citing the Hudson River waterfront in The Bronx, the north shore of Queens along the Long Island Sound and an extension of a greenway along Eastern Parkway in Brooklyn.

Orcutt said the involvement of multiple city agencies — including the Parks and Transportation departments, as well as the Economic Development Corporation — tends to complicate efforts to link greenways.

“It’s hard to have a citywide vision or program that can appeal to Congress for funding with so many cooks and jurisdictions,” he said.